Two blokes and esky full of beers got swept out to sea on a blow-up mattress AND god, when will people learn that inflatables and the ocean do not mix??

Appearing on Sunrise this morning, Jackson Perry and Noah Palmer explained how they were stranded kilometres out from the West Australian coast on Saturday. Yep, far out into the Indian Ocean.

Equipped with nothing but an esky filled with beers and a dying phone, the boys were stranded kilometres out to sea for hours. https://t.co/4IAn2fbM5L

“We just thought we’d go out and drift around on the water for a moment on the mattress, and then we realised the wind had taken us out,” Jackson said.

“We couldn’t paddle against the wind and we just kept going further and further out. We only aimed to be 100m off shore, max, and before we knew it, we were out to sea.

“All we knew is that Tex (their friend) was 30-40 minutes away, and we were just hoping he finds us because all of our phones were dying and we were kind of getting worried at that point.”

Thankfully, they had an esky full of cold ones to take their minds off the slightly traumatic experience. But told Kochie that the panic really started to settle in when they eventually ran out of beers. 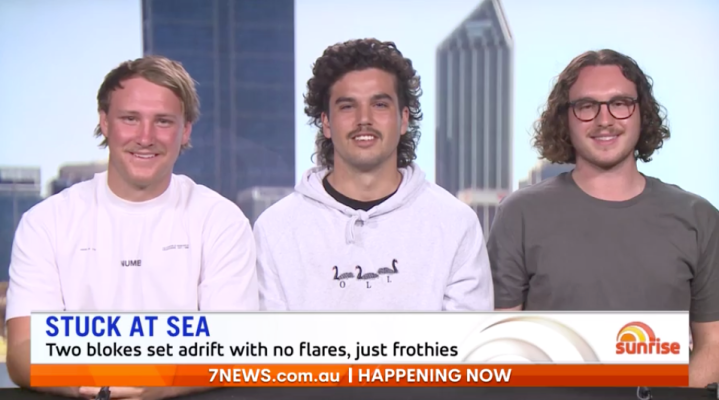 The seamen were in the ocean for a good three hours, but didn’t seem too phased by the ordeal, documenting the journey on their phones. 7News has the exclusive video, so you’ll have to head to this link to check it out.

It’s good that they can laugh it off, but honestly it sounds pretty scary. At one point the mattress started deflating and Jackson had to keep hopping into the water to blow-up the mattress.  You couldn’t even pay me to go more than neck-deep into the ocean, so being stranded kilometres out into the ocean sounds like literal hell to me.

We love to sea it.