After a rough month for Donald Trump, where he oscillated between being America‘s populist right-wing hero and some kind of detestable sex lunatic, he has fresh wind beneath his wings – all because Clinton‘s emails are back in the news cycle again, and voters are noticing.

We reported on the weekend that Clinton’s campaign copped a pizzling thanks to a reopened FBI probe into the frankly moronic private email server she had set up while she was Secretary of State. It was especially galling because the probe was back because of an unrelated FBI probe into perv former congressman Anthony Weiner, husband to top Clinton aide Huma Abedin, who was being investigated for sexting a teenager.

Now, the Trump and Clinton campaigns are duelling. Clinton is still in the lead in the polls, but her firm grip after the Trump sex scandals has narrowed. An ABC News/Washington Post tracking poll released Sunday showed Clinton ahead 46% to 45%, which is narrower than the two-point lead the same poll gave her only one day before.

Also according to polls, 3 in 10 Americans say that the new revelations about emails would make them less likely to vote Clinton. It’s reported that that number is mostly made up of Republicans and Republican-leaning independents though, which might not bode so poorly for Clinton after all. Weekend polling is notoriously unreliable, so we’ll have to see over the coming days whether this has actually affected anything much at all.

Obviously the FBI is treading very carefully around the appearance of influencing the election – reported today indicated that staffers at the bureau knew about the fact new emails may have been found for some time before informing director James Comey. Its quite rare for the FBI to inform the public about something like this once an investigation has closed.

But it’s clear the email stuff has shaken her and her camp. Clinton said the FBI’s move was “unprecedented” and “deeply troubling”, and is clearly cognisant of the fact that being under investigation by federal law enforcement while Americans go to the polls is not a particularly stellar look.

FiveThirtyEight‘s generally respected poll-of-polls model still pegs a Clinton win as pretty damn likely – just look at these figures. But Clinton was far further ahead even a week ago. 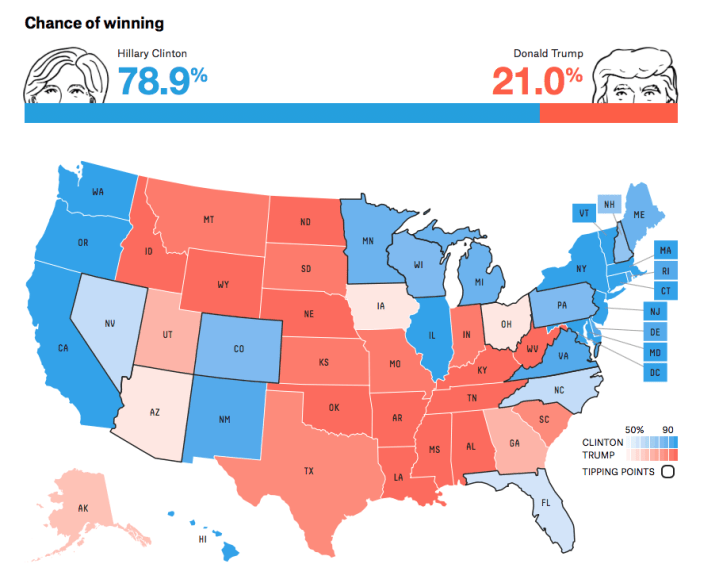 Once again, this election seems to have become a debate not so much of policy but of which candidate has perpetrated the biggest crimes. Inspiring stuff for America.