The Pakistani tea seller with the ~supposedly good physique~ has now scorned himself a modelling contract after going viral for being hot.

Arshad Khan, 18, was snapped at Islamabad‘s Sunday Bazaar by photographer Javeria Ali, who posted the photo on her social media channels. Thousands of thirsty people quickly declared him their new international bae, sending his pic viral with the hashtag #ChaiWala (tea seller).

Those baby blues, though: 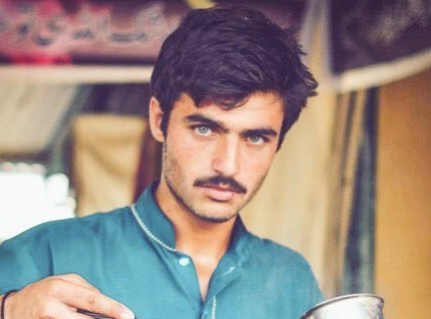 Thanks to the skyrocketing interest in this particular model, Ali posted more picks of hot Chai Wala dude, returning as well to get more snaps of him in action.

#chaiwala Ladies I found him!

“Chai wala is not more chair wala not he is fashion wala!” the brand wrote on Facebook. “We are launching our full version [of the website] after the successful beta launch and Arshad #chaiwala will be working for Fitin as a model.”

Truly a testament to the power of social media and/or being ridiculously photogenic.

Obviously this is not the first time a person who went viral for being photogenic was picked up a brand. Remember 17-year-old Axelle Depiegelaere who scored a plum modelling gig with L’Oreal after a pic of her at the World Cup in Brazil went viral?

That very quickly came crashing down in flames, but it was a wild ride for a while there.