The Boston Globe has won hearts around the world – and pissed off one of the richest, most powerful men in the world – in the past 24 hours.

They’ve managed this by printing a fake front cover of their paper, to show people what the media landscape and normal life would look like if scarily Nazi-ish Republican candidate Donald Trump was voted in as President of the United States of America.

They cover Trump’s desire to deport and remove the immigration rights of Mexican and Muslim people, arrange curfews, place restrictions and criminal charges on journalists to limit freedom of speech and public interest, and a range of other truly petrifying policies that Trump has advertised on in his campaign trail.

The faux cover, which was created wholly by the Globe’s editorial team (not the newsroom), was referred to as ‘the front page we hope we never have to print”.

And that description is wholly understandable. Take a look for yourself:

What’s a “Trumping to Remember” and what could it have to do with the White House in 2017? https://t.co/BPQtdpECE4 pic.twitter.com/u8emjW8dJT

“It is an exercise in taking a man at his word. And his vision of America promises to be as appalling in real life as it is in black and white on the page.

The toxic mix of violent intimidation, hostility to criticism, and explicit scapegoating of minorities shows a political movement is taking hold in America. If Trump were a politician running such a campaign in a foreign country right now, the US State Department would probably be condemning him.

It is better to lose with principle than to accept a dangerous deal from a demagogue.” 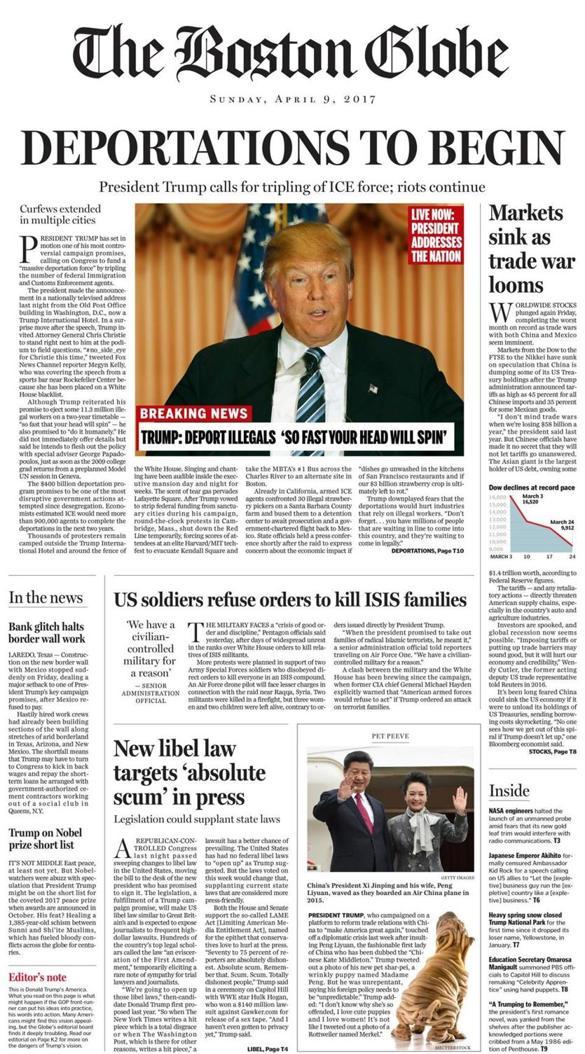