A search for missing Aussie backpacker Rye Hunt on an island off Rio de Janeiro after an unconfirmed sighting has turned up zilch, sending no doubt disappointed authorities and his family back to square one.

It was hoped that the 25-year-old Tasmanian – who hasn’t been since since May 21, when he allegedly suffered a psychotic break after taking party drugs with travel buddy Mitchell Sheppard – would be found after Rio’s missing persons unit received a phone call from a fisherman who reported spotting Rye on Cotonduba Island, about three kilometres off the coast.

When the fisherman asked how he’d gotten to the island, the man – who apparently identified himself as Aussie – said he’d swum there.

But authorities have apparently since searched the island twice, and “nothing was found”, Brazilian police said. “Police are still trying to look for the Australian citizen.”

“We are seeing the same reports in the media- that Rye has been found. We have no confirmation of this. We are hopeful but understandably cautious of these reports. This information has not come via our official channels. We await news from Australian authorities.” 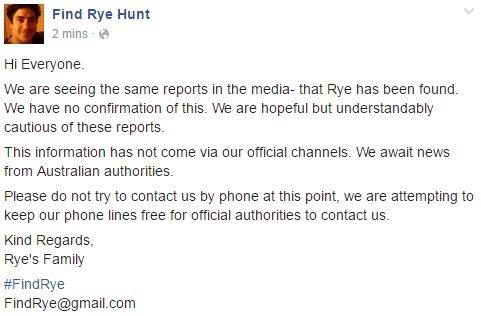 Rye’s uncle and long-term girlfriend are in Rio helping with the increasingly desperate search.

The Department of Foreign Affairs and Trade says it’s providing consular assistance to his family members in Brazil and “remains hopeful that Mr Hunt will be found safe and well”.