Editor’s Note: The first paragraph of this story has been edited to more accurately reflect the purported actions of One Nation officials.

While many Australian politicians and swathes of the public have condemned Pauline Hanson’s One Nation following a report that appeared to show party officials considering soliciting millions in dollars from the NRA, the party’s vocal online support base have openly and readily rejected the findings – or just don’t think they’re worth reading into. 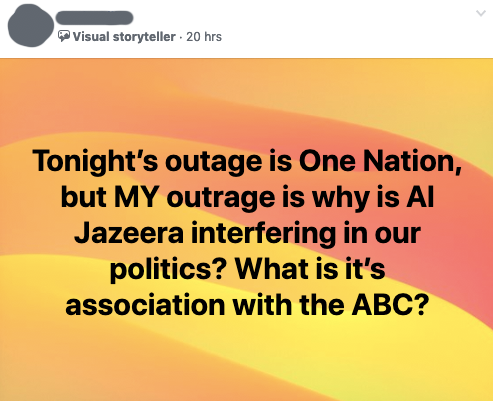 Footage shows both men meeting with NRA officials and soliciting strategic advice from the controversial gun rights group, as well as discussing the possible donation of millions of dollars.

On Tuesday evening, both Ashby and Dickson fronted media, saying they were actually just really drunk (read: “on the sauce“) when the discussions took place. Dickson went so far as to say he trusted the undercover Al Jazeera reporter because he wore an Akubra.

Silent until Wednesday afternoon, reportedly due to a swollen tick bite on her face, party leader Pauline Hanson tweeted out a short statement calling the story a “hit piece” and accusing the Qatari government-funded media organisation of “targeting Australian political parties”.

It’s this comment that has been the party’s stance on the Al Jazeera exposé since it was first published.

I was shocked & disgusted with the Al Jazeera hit piece. A Qatari government organisation should not be targeting Australian political parties. This has been referred to ASIO. After the full hit piece has been released I’ll make a full statement & take all appropriate action. -PH

One Nation’s initial response to the Al Jazeera story was swift: basically, they called the cops.

The matter was referred to both the AFP and ASIO by the party, while Ashby spent the day calling the report the workings of a “state-owned propaganda arm of the Qatari government.”

What a time #auspol pic.twitter.com/5wSl5yooPT

Online, the closed Facebook groups and collected Facebook pages that make up One Nation’s digital support have largely agreed with and spread that reasoning.

Many of the party’s supporters are set on the allegation there were secondary motives to Al Jazeera’s report, while others have touted the millions of dollars China has apparently been pouring into Australia’s other political parties.

Doug, a One Nation supporter from Alice Springs, told PEDESTRIAN.TV the Al Jazeera report would not affect his support of the party, as the only thing Ashby and Dickson were guilty of was being caught in the act.

“All parties take donations,” he said. “All of them from questionable sources.”

“I’m interested in who has done it and what the motives are.”

Doug was echoed by fellow One Nation supporter Norman, who questioned the timing of the report so close to a federal election, telling PEDESTRIAN.TV it was all “a storm in a teacup.”

“We know they all do it,” he said, explaining he believed the report was just deflecting from real issues. “It’s down to you to look at their policies and make your decision from there.”

Those that do question One Nation’s authenticity are quickly shouted down and told that they either do not fully understand the story or should wait until all of the footage Al Jazeera collected has been released – an appeal that has also been made by Ashby. 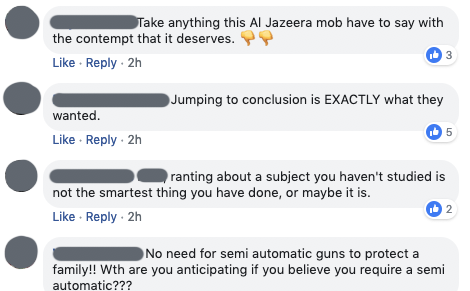 Even conservative radio shock jock Ray Hadley was flamed out, called a “grub” and “has-been” after someone in the group said he called for the sacking of Ashby and Dickson.

Former One Nation senator turned cheerleader Malcolm Roberts stoked the flames further, doubling down on the party’s “Al Jazeera is propaganda” line with a Facebook post that was shared hundreds of times and filled with comments.

On the whole, Facebook groups – particularly political ones – operate as political echo chambers. The key defences of “everyone doing it”, “Al Jazeera being a foreign entity”, and “not seeing all the footage” pop up throughout comment sections and posts.

These are, of course, ideas that are not unique to the supporter base. Mark Latham – the former Labor leader turned newly elected NSW One Nation leader – appeared on Sky News on Tuesday night to defend his partymates and say there was an “entrenched bias” against One Nation.

“This poisons our democracy,” he said.

“There’s enough distrust in politics without going down the path of systematic entrapment.”

Latham did tell 2GB Radio the meeting wasn’t something he would have done and said claims of drunkenness from Ashby and Dickson were “no excuse.”

Australian Prime Minister Scott Morrison has condemned One Nation, both as a party and for their meetings with the NRA, but has stopped short of saying how he will preference the party in the federal election.