I don’t really know how AFL works but I reckon we should just give Nic Naitanui the damn premiership after his efforts tonight in delivering the absolute sickest burn to  Reilly O’Brien.

In an absolute power move, Nic Nat gave the Crows player a new phone – referencing *that* awkward Twitter interaction earlier in the week.

Earlier this week, O’Brien made headlines after he accidentally tweeted his private game notes describing Nic as “lazy an unfit.” 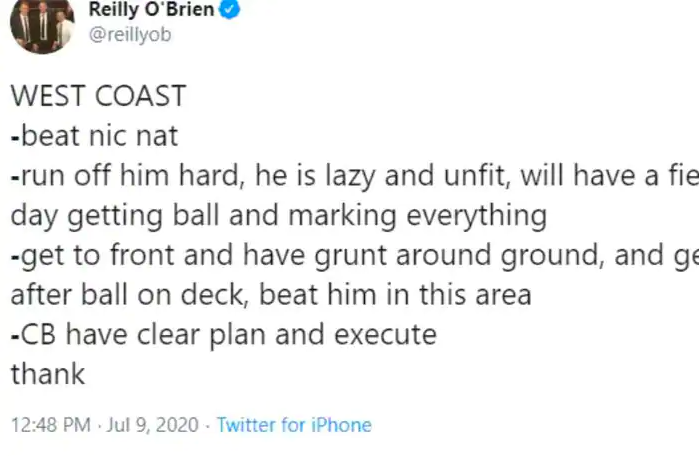 After a stellar game proving that he’s far from lazy and unfit, Naitanui made headlines for his post-match humour.

In what I can only assume was Nat’s way of burying the hatchet and proving that he’s capable of having a joke, he handed the Crows ruckman a brand new Samsung phone.

“Telstra crew got a hold of it, they gave me a brand new Samsung,” Naitanui told Fox Footy after the match.

“It’s a better phone than I’ve got, think it cost $1500. I’m scared people are going to keep talking smack to get a new phone. He’s one of the nice guys, he didn’t mean any malice.”

Nat, if you’re reading this, I’m not going to talk smack but please feel free to slide into my DMs and give me a free phone too!

“He’s one of the nice guys, there was no malice. We got @Telstra to send up a brand new phone, so that’s what I handed over to him.”

Ultimately, Naitanui proved that he’s a legend both on and off the field, with West Coast winning the game by 33 points.

We simply must commend his banter game.

“It makes the footy exciting, we’ve got respect for each other.”