There’s been a significant volume of hullabaloo over the past week about our shiny new deputy prime minister and his illustrious history of batshit insane remarks about everyone from the LGBT community to women athletes. As a direct result, there’s also been a lot of debate about just how much leeway we should give people for their beliefs from over two decades ago.

Here’s our take: nada. Michael McCormack’s columns in the Daily Advertiser should be his cross to bear in perpetuity.

The short version, in case you live under a rock, is this: new Nationals leader and deputy prime minister McCormack penned a number of incredibly incendiary columns for the Daily Advertiser, the local paper in Riverina, back in the 1990s while he was editor. Even in the grand pantheon of homophobic screeds, McCormack’s is pretty fucking bad:

A week never goes by anymore that homosexuals and their sordid behaviour don’t become further entrenched in society. Unfortunately gays are here and, if the disease their unnatural act helped spread doesn’t wipe out humanity, they’re here to stay.

On Monday hundreds of thousands of homosexuals marched through Washington in a demonstration intended to show their demands for equal rights and an end to discrimination should no longer be ignored or denied.

How can these people call for rights when they’re responsible for the greatest medical dilemma known to man – Acquired Immune Deficiency Syndrome.

Even for the early nineties, that’s some heinous stuff – the kind of invective you rarely see outside of the domain of fundamentalist hate preachers in the United States.

Much of the defence coming from conservatives argue that he should be given a pass on this because people change. Over at the Daily Telegraph, Caroline Marcus argues that “it’s not fair to judge him now on the views he held 25 years ago” despite the fact they were “indisputably reprehensible.”

“Of course, it’s reasonable politicians should expect their past to come back to haunt them,” she writes. “But it’s not fair to crucify a man for comments he made 25 years ago for which he has repeatedly apologised.”

One thing that rarely seems to come up here is a proper analysis of power and how it works, and the kind of people to whom we should give power. Of course people change, and people who offer genuine contrition for awful things they’ve said and believed in the past should be welcomed back into the fold if the relevant communities think its appropriate. But most people who renounce their shitty past aren’t becoming the literal deputy prime minister of Australia.

That’s the key difference here. McCormack was thrust into the deputy prime ministership thanks to Barnaby Joyce’s root rattery and the internal machinations of the Nationals. Australians – and especially queer Australians – absolutely have the right to say “get fucked” when someone who was thrust onto the throne by elite power games has a history of horrific (and, ultimately, unrepresentative) beliefs.

This isn’t your homophobic mate from high school who has come good over the past couple of years and is a better bloke now. This is by any objective measure one of the most powerful people in the country. He, like practically any elected politician, hasn’t earned a scintilla of sympathy when he’s made to eat shit over stuff he at one point thought was fit to print.

The bottom line is this: we’ve all probably said, done and believed things we regret. That’s part of being human. But we’re not being handed the keys to the castle, are we?

It’s wonderful that he has changed his tune, now believes LGBT people are deserving of respect, and voted in line with the result of the same-sex marriage postal vote. But if the price he has to pay for his cushy salary and access to the levers of power is having people constantly remind him about his shithouse takes of yore, then that’s fine by me.

(Having read hundreds of words of opinion about this, you can now look at this Clickhole article, which summarises the issue far more succinctly.) 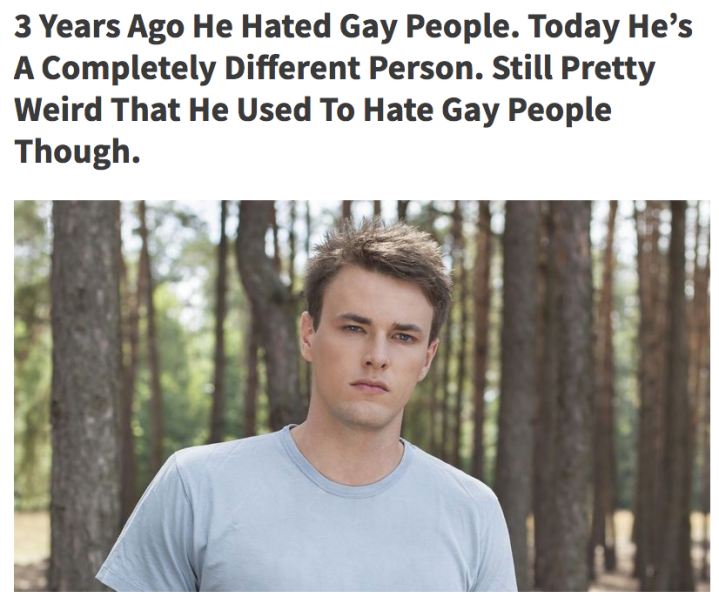