It’s called into question – again – a deeply homophobic newspaper column he wrote in 1993, where he blamed gay people for the AIDS crisis.

When he was editor of Wagga Wagga‘s Daily Advertiser, he penned a column from the editor’s desk titled ‘Sordid homosexuality – it’s becoming more entrenched.’

“A week never goes by anymore that homosexuals and their sordid behaviour don’t become further entrenched in society.

“Unfortunately gays are here and, if the disease their unnatural act helped spread doesn’t wipe out humanity, they’re here to stay.

“On Monday hundreds of thousands of homosexuals marched through Washington in a demonstration intended to show their demands for equal rights and an end to discrimination should no longer be ignored or denied.

“How can these people call for rights when they’re responsible for the greatest medical dilemma known to man – Acquired Immune Deficiency Syndrome?

“It claims thousands upon thousands of innocent people’s lives every year.

“On the very night of the homosexuals’ march that pompous critic Stuart Littlemore on Media Watch on the Australian Broadcasting Corporation had the gall to criticise various newspapers editors across Australia for “gay bashing”.

“He ridiculed them for showing some moral backbone and condemning homosexuality.

“It’s just as well some newspapers are speaking up and acting as watchdogs on moral issues. If it was left up to the likes of Littlemore, heaven knows some of the all-embracing attitudes society would be told it was OK to accept.” 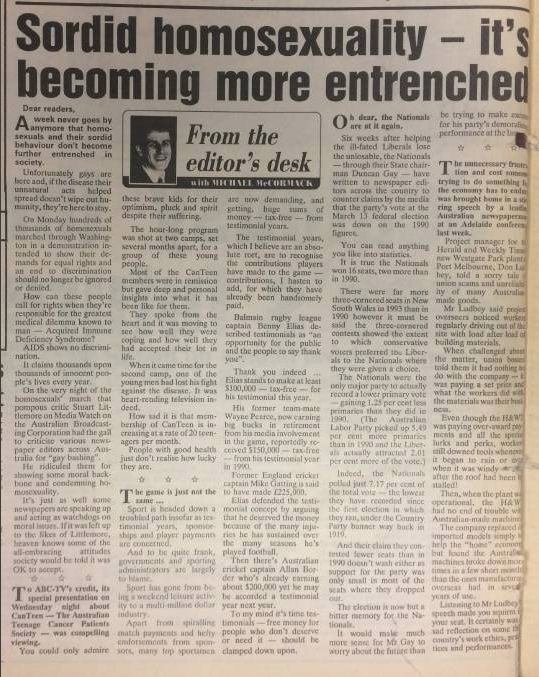 McCormack has apologised multiple times for that column throughout his career – including during the postal survey last year – but now LGBT advocates are rightly raising concerns.

“The apologies Mr McCormack made in the past are welcome but given the hatefulness of what he said, and the high office he may step in to, he needs to walk the talk,” said advocate and just.equal spokesperson Rodney Croome to the AAP, reported by News Corp.

“He needs to get behind initiatives that will reduce the unacceptably high levels of LGBTI isolation, prejudice and suicide that still exist in some parts of rural Australia.

“He needs to heal the wounds caused by the kind of prejudices he publicly expressed in the past.”

Christine Forster, Sydney City councillor and Tony Abbott’s sister, also told the AAP that McCormack’s column was “abhorrent”, and that as a public figure, he has to “expect to be subjected to that kind of scrutiny”.

However, she also acknowledged that it was written a long time ago, and that he “did the right thing” by not opposing same-sex marriage last year.

It was also last year that he reiterated his apology, issuing a statement saying that he’s not just learnt “to tolerate but accept all people, regardless of their sexual orientation, or any other trait of feature which makes each of us different and unique.”

Online, however, people are far less forgiving, pointing out that such deeply entrenched homophobic beliefs cannot simply be erased.

This weekend we celebrate #MardiGras40. In Canberra, they reward this pic.twitter.com/qC6s5l4qg1

compare the pair
– deputy heads of government
– hate gay people
– Lego hair
– look like morticians who love the work a bit too much
– attempts to smile bring up a 404 error message pic.twitter.com/TghJeuAOM3

Congrats to Michael McCormack, new deputy PM, who wrote this in 1993 when I was eleven. pic.twitter.com/mlhi80W73k

McCormack was 3 years older than I am now when he made those comments, and the editor of a newspaper. They contributed to a toxic, discriminatory culture for decades. Why does he get to bury them now? https://t.co/cCKOLb5XJj