A Melbourne Airbnb host has been banned from the platform after allegedly refusing to rent an apartment to a 19-year-old woman on racist grounds, if you weren’t already positive racism is alive and well in 2020.

The Airbnb host, identified only by the name ‘Helen‘, rejected Sadia Mohamed, 19, and her sister on the basis of their skin colour.

In screenshots shared to Twitter, Helen told Mohamed: “If you are black, please forgive us for not receiving you”. She then asked Mohamed to seek a refund through the app.

“I was booking an Airbnb for my sister and I gave her half of the money. Then she replied 2 days later and said if I was black she couldn’t offer the house to me anymore, which is so disgusting,” Sadia told PEDESTRIAN.TV.

“We then messaged her back and explained she can’t say that and think she can get away with that. She then started to talk about our upbringing and how we don’t know how to act.

“She told us that it was her building that made that rule. My money hasn’t been returned back to me yet but I did apply for a refund.”

Helen claims she was speaking on behalf of a listing for Everhome Melbourne Village. Both she and the listing have since been removed from the app by Airbnb, with the actions being labelled “unacceptable.”

In screenshots of their conversation posted to Twitter, Helen claimed she wasn’t “discriminating against anyone”, and appeared to take issue with being called racist for her *check notes* racist policy.

“Hi just wanted to book this for two nights for my sister and I’s getaway,” wrote Sadia.

“Thank you so much! If you are black, please forgive us for not receiving you!” wrote Helen.

“I do not appreciate this at all! This is pure RACISM,” wrote Sadia.

“For someone to be hosting on a major platform such as this, such discrimination is not acceptable.” 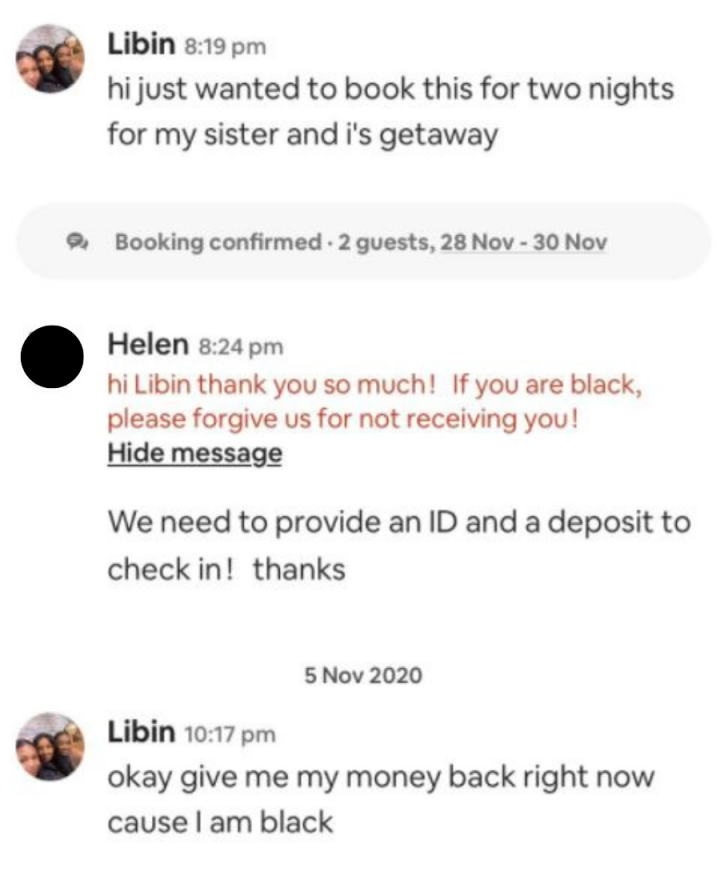 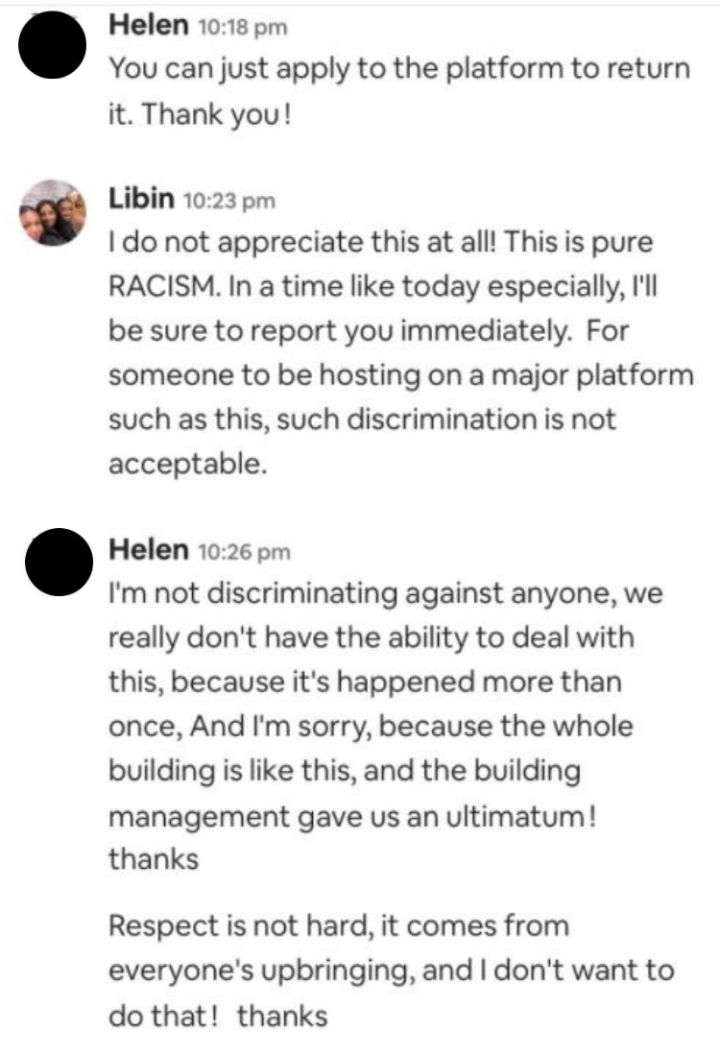 In her private messages to Sadia, Helen claimed that the racist exclusion was at the request of “building management” who gave her an “ultimatum” and asked for Sadia to respect her wishes in excluding her from the listing.

“I’m not discriminating against anyone, we really don’t have the ability to deal with this,” Helen wrote.

“Respect is not hard, it comes from everyone’s upbringing, and I don’t want to do that!”

Airbnb has sent out an apology to Sadia and her sister for the treatment, and have removed Helen and her listing from the app.

“They said they don’t condone this kind of behaviour and it is disgusting and that they will try and help me find another one,” said Sadia.

“Airbnb’s mission is to create a world where everyone can belong anywhere. This is something we care deeply about and are absolutely committed to,” Derek Nolan, Airbnb’s Head of Public Policy in Australia, told P.TV in a statement.

“Discrimination is unacceptable and has no place in our community. We have removed a host and the listing in question and will continue to investigate the matter.

“We enforce a strict non-discrimination policy and under our Open Doors initiative, if a guest feels they have been discriminated against, we will provide personalised support to ensure they find a place to stay.”