For non-Indigenous Australians, January 26 has in recent years been celebrated as ‘Australia Day’, for Indigenous Australians, it’s Invasion Day. The date, which marks the arrival of the First Fleet, has become a day of mourning for what those tall ships from England brought with them—death, suffering, and the beginning of what’s now over two centuries of injustice and dispossession to First Nations people.

Being a good ally to Indigenous Australians is about more than talking the talk; you need to walk the walk. Putting in time, money, and solidarity at a local Invasion Day protest on January 26 is a good way to start.

Here’s a quick history lesson, because God knows we weren’t taught this in school.

Thousands of people mark January 26 as a day to mourn those who have passed, and hold protests and demonstrations to fight for Indigenous rights. Just about every major capital city holds rallies and gatherings to call for action on things such as transparency around Indigenous deaths in custody, the inclusion of First Nations people in the Australian constitution, and changing the date of Australia Day from January 26.

So here is a list of gatherings, protests, demonstrations, rallies, and marches on this Sunday, January 26, for you to get along to and stand in solidarity with First Nations people across the mainland and our surrounding islands.

Meet at 11am at Hyde Park South, corner of Elizabeth and Liverpool Streets, marching through to Yabun at Victoria Park.

Yabun Festival is on at Victoria Park, Camperdown from 10am to 7pm.

The full official Yabun 2020 line-up! We’ll be selling shirts with the design on the front from the Gadigal info tent at the festival. You can also download and print an A3 poster from our website (link in bio) Feel free to slap one up at your place of workplace or anywhere else you think might get some ????. If you do it, snap a photo and tag us, we’ll put you in the draw to win a free shirt. Only a couple weeks to go… #resistinvasion #celebratesurvival #continueculture #yabun design by @nungalacreative

Meet at 11am at Parliament House, Spring Street. 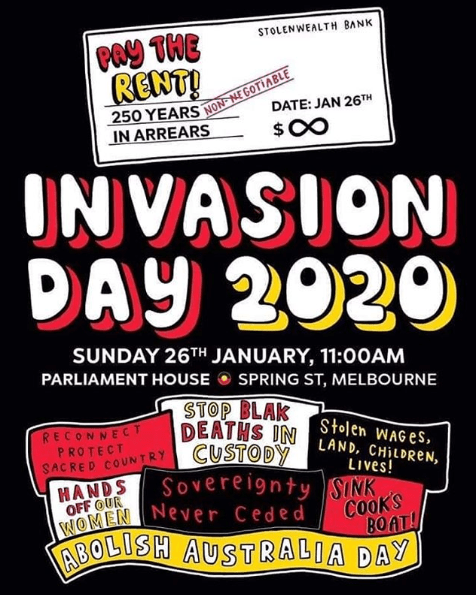 Share The Spirit festival kicks off at 12pm at Treasury Gardens, running until 7pm.

Survival Day 2020 is on at the Tandanya National Aboriginal Cultural Institute from 1-6pm. Head down to 253 Grenfewll Street and the adjacent park in Adelaide to join in on the family-friendly celebrations. More information over here.

26 January is “Survival Day”, an important time when the community gathers to celebrate the resilience of Aboriginal and Torres Strait Islander peoples. The day serves to acknowledge and reinforce the present and the future of our cultures. Survival Day embodies the reality that Indigenous cultures are strong, with much to be positive about despite the negative effects of colonisation. #Kaurna #tandanya #thingstodoinadelaide  #blakndeadly #indigenous #sovereigntyneverceded #firstnations #Anangu #Koori #Murri #Noongar #yolgnu #Koorie #Goori #Palawa #TSI #deadly #blackpeople #iseedeadlypeople #survivalday #changethedate #stiffgins #augustmgmt #culture #alwayswasalwayswillbe

An Invasion Day rally is currently planned for Forest Place, on Wellington Street in Boorloo (Perth), from 12pm – but there are currently some issues with double-booking. The rally may potentially be moved to Yagan Square by the State Library. Keep yourself updated over on the event page.

Meet at 10am at Queens Garden, march to Musgrave Park.

Invasion Day 2020 marks 250 years of colonial destruction of First Nations people and our lands and waters. The past 250 years of colonial destruction has created the many issues that we are currently facing. Invasion Day is an event where First Nations people mourn, survive and continue to resist against the colonial terrorism organisation that is Australia and defend sovereignty. This Years Brisbane Invasion Day Rally and March will be starting at Queens Gardens next to the casino. This years new location will suit the size of the growing crowds. If you attended Invasion Day in Brisbane last year please add some of your photo's and videos. RSVP via Facebook Event Hosted by Warriors of the Aboriginal Resistance – WAR and Brisbane Aboriginal-Sovereign Embassy #blakndeadly #indigenous #sovereigntyneverceded #firstnations #Nungas #Anangu #Koori #Murri #Noongar #yolgnu #Koorie #Goori #Palawa #TSI #deadly #blackpeople #iseedeadlypeople #abolishaustraliaday #changethedate #dayofmourning #Turrbal #Jagera #Mianjin #Meanjin #brisbaneaboriginalsovereignembassy #warriorsoftheaboriginalresistance

Where to attend: Ngunnawal Country / Canberra

Meet at Veterans Park in the city at 11am for an 11.30am start across the Commonwealth Avenue bridge, the Survival Day march led by the United Ngunnawal Youth Council will finish at Parliament House Lawns at 12.30pm. Protesters are encouraged to bring banners, signs, and plenty of water.

Where to attend: Larrakia Country / Darwin

JANUARY 26: ALWAYS WAS, ALWAYS WILL BE

January 26: Always Was, Always Will Be is on at Civic Park in Darwin from 11am, with a Welcome To Country, key speakers, free BBQ, and art workshops happening until 2:30pm.

Where to attend: muwinina Country / Hobart

This year’s Change The Date rally kicks off from the Tasmanian Aboriginal Centre (TAC) at 198 Elizabeth St, Hobart at 11am, and arrives at Parliament Lawns at 11.45am.