In a supreme case of irony, the writer who outed a Melbourne graphic designer for impersonating women to gain access to sexually explicit images from a closed Facebook page before posting them direct to a lads’ group has started copping a multitude of death threats.

Brandon Cook called out Lindor Jonuzi, 19, after he bragged about infiltrating a bunch of female-only FB groups like Melbourne Soul Sisters – in which women generally shoot the breeze and occasionally post nudes or partial-nudes of themselves for positive affirmation from fellow members – “through fake female accounts” and expressed that he was hell keen to “post quality content to roast sluts”.

THEY ARE ACTUAL WORDS HE USED ‘SCUSE WHILE WE VOMIT IN OUR MOUTHS.

In a public FB message to Jonuzi’s employer – global dance music talent agency, Lucky Ent – Cook exposed him as someone “in the business of impersonating women on Facebook, using those fake accounts to acquire naked photos of women in private groups and circles.”

Dear Lucky Ent.It would appear that one of your designers, Lindor Jonuzi, is in the business of impersonating women on…

Understandably, a LOT of hate was directed at Jonuzi for the gross invasion of privacy, which included sharing a nude selfie of an underage girl named Kamila.

Lucky Ent confirmed it’d “terminated” his contract and he subsequently apologised to the women he had “grossly offended” in a lengthy FB post.

“I have grossly offended many through my online actions. This has hurt and offended many women. I understand these behaviours can easily turn a person who was once loved by everyone into someone whom women and anyone for that matter don’t feel safe being around or with,” he wrote.

Jonuzi blamed a “lapse of judgment” and said he posted the naked images “in the heat of disgusting series of events within the Melbourne Lads group.” 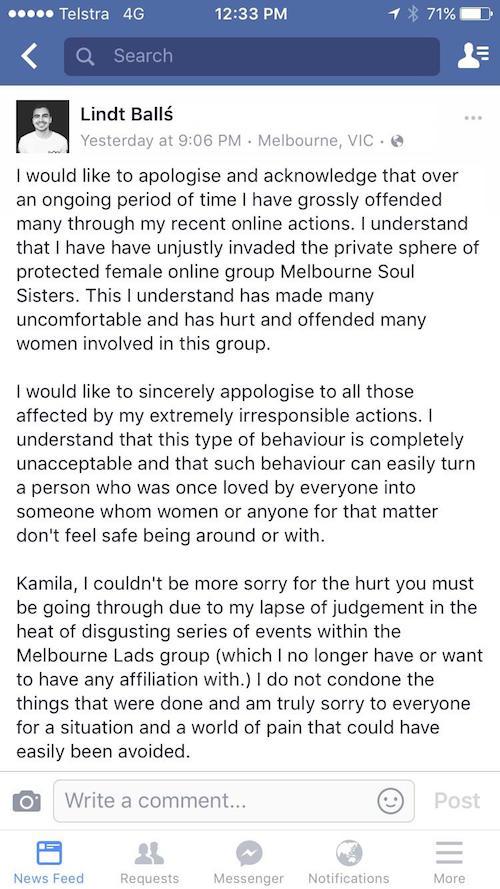 The story was picked up by everyone from The Age to the Daily Mail, with Cook even appearing on last night’s episode of ‘The Project’ to talk about the whole mess.

Cook, on the other hand, has been on the receiving end of a barrage of hate from anti-feminists outraged that he would DARE “ruin Jonuzi’s life” by calling him out for such behaviour. 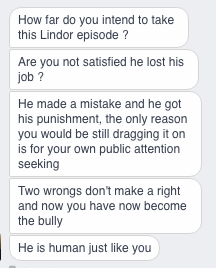 Not only that, but various fuck bois, who we can only assume are members of these types of Melbourne lads’ groups, are tearing shreds off him for violating the ‘bro code’ / invading their personal space by sharing the group info. He’s even copped death threats.

Huh… an invasion of personal space… kinda of like the distribution of nude photos without someone’s permission, no?

Speaking to PEDESTRIAN.TV, Cook said he was blown away – if not a little freaked out – at the hate being directed at him.

“As a writer, I’ve received hateful messages in the past, and the best thing to do is laugh about it, but I was out at a restaurant after ‘The Project’ and I was genuinely freaked out about the possibility of someone attacking me… one of the comments I saw was ‘Someone should blow this guys head off’.

“The takeaway message is that guys don’t like you taking things from their private space and airing it – the irony, huh. Not a single woman has messaged me saying I’ve done the wrong thing.”

He added: “No one likes to be made an example of, but I think a lot of the anger is totally misdirected. I just happened to be the guy who contacted his employer, but Lindor is the one who did the wrong thing.”

Cook has been reposting all the hate to his public FB page, outing the most pathetic trolls’ comments.

To which we say: GOOD.