Given that they paid then-16-year-old columnist Caleb Bond to express his opinions on everything from conservatism to higher education to class warfare to Islam to council amalgamation to electoral politics to marriage equality, you might think News Corp would be open to teens who are engaged in politics having a platform to talk about the things they care about. You would be shocked — shocked — to learn that this does not extend to 16-year-old Greta Thunberg, who has managed to break the brain of just about every commentator on the News payroll. After Thunberg’s address at the UN yesterday, the usual cast of frenzied opinionmongers crawled out of the swamp to have a very public conniption about a teen who doesn’t want the planet to die.

Miranda Devine (usually known for her balanced, well-thought out takes) came out guns blazing with a column calling for someone to be “arrested for child abuse” for letting Thunberg speak out on climate change:

It is grotesque that a child, already emotionally vulnerable due to her condition, has been so indoctrinated by adults.

Her belief that the world is going to end in 2030 is not even supported by the UN’s own IPCC report released last year.

But she does believe it with all her heart. She has taken literally the cynical scaremongering of climate activists who deliberately are using children as human shields in their mission to destroy capitalism.

(Incidentally, that IPCC report does, in fact, say we have until 2030 to dramatically curb the use of fossil fuels in order to avert a climate catastrophe — but, hey, why actually listen to what Thunberg is saying when you can dismiss out of hand a dumber version of her message that you concocted in your weird little brain.)

In The Australian, big fuckhead Chris Kenny dismissed Greta Thunberg as “hysterical,” describing her as “a Swedish vegan, climate campaigner, who is diagnosed with Asperger’s syndrome, anxiety disorders and obsessive compulsive disorder” — a description that seems like it would be maybe three words long if you kept only the relevant stuff.

Maintaining the same undercurrent of 50s sexism, Kenny wrote her off for being too emotional and denied she had any agency in feeling the way she did:

Now we all know about the emotional rollercoaster rides that teenagers go through, which is why we tend to encourage and nurture them without taking their obsessions too seriously.

But this girl seems overwrought, and instead of caring for her, there seems to be a movement taking advantage from her obviously confected, unwarranted and overblown angst.

Honestly, if the climate issue is as bad as the adult alarmists and political activists say, they don’t need to do this. Surely most sensible people around the world are turned off by this embarrassing side show.

Tim Blair took a similar tack to Kenny with the short piece he sharted out (“Jackboot Greta Gets it All Wrong”), calling “teen climate queen” Greta Thunberg’s address one of the most “absurd and melodramatic” speeches ever heard at the UN.

Blair, an insightful genius of the highest calibre, decided the best counterpoint to Thunberg’s assertion that we are destroying children’s futures is that she got to go sailing:

“This is all wrong. I shouldn’t be up here,” Thunberg began. Unfortunately, these were Thunberg’s only accurate lines from her entire appearance.

“You have stolen my dreams, and my childhood, with your empty words,” the 16-year-old continued.

Given she’s now become a global celebrity who gets to sail around the world and address the UN, Greta’s stolen dreams must’ve been pretty lofty.

On one hand, the planet might not be viable for sustaining its human population by the time Thunberg is Blair’s age, but on the other hand, she got to go on a boat and be abused by a series of unhinged columnists. Pretty cool!

Convicted racist and habitual climate change denier Andrew Bolt appeared to empathise with Thunberg although, on closer inspection, he was just being a patronising dickhole. Putting out some forward sizzle for his TV show last night, bolt promised to “name some of the reckless adults who helped to scare this disturbed girl senseless”:

I hope the people who built her into the child messiah of global warming are now ashamed of themselves. See her distress? Hear her absurd fears?

Never giving up a chance to be a dipshit on television, Elizabethan mall goth Daisy Cousens took her affected Transatlantic accent on Bolt’s show opine on how the teen brain isn’t smart enough to fully understand climate change, adding that they are being “terrified by adults who should know better”.

That girl has had an absolute nightmare of a time with her mental and neurological ills, the last thing she needs is to be the centre of this climate change movement.

I reckon maybe the actual last thing she (and everyone else on this planet) needs is continued inaction on climate change.

One of the weirdest responses was from The Australian’s environment editor Graham Lloyd, who for reasons unknown decided that Thunberg’s quite straightforward speech needed some sort of translation? Very odd: 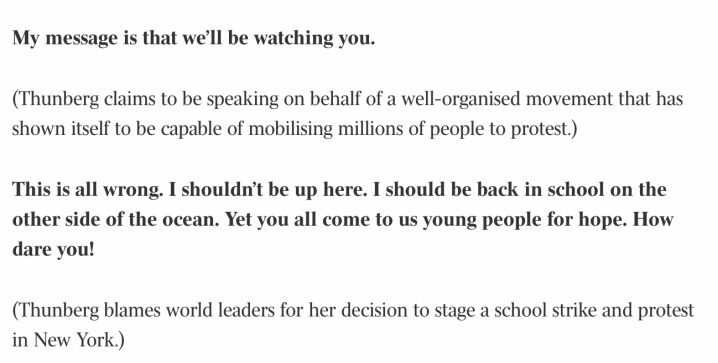 Look, if these are the people that are pissed off at what you’re doing, you’re probably on the right track.