Looking To Buy A Fresh UTI? According To Its Website, Chemist Warehouse Has You Covered

According to a Chemist Warehouse website mix-up, you can now apparently buy a fresh Urinary Tract Infection straight from the store. Now that’s the kind of convenience I’ve been waiting for. Really helps skip the usual lengthy process.

The funny little mistake was first pointed out by Reddit user (now bear with me here) u/poo-in-your-bum-bum, who posted the image online under the caption “hard to pass up this discount at CWH!” According to, uhhh, poo-in-your-bum-bum, the pic was sent to them from a family member, who noticed the mishap and shared it around.

Hear that folks, if you fancy picking up your UTIs in person, then Chemist Warehouse is all stocked up. Shelves absolutely brimming with UTIs. You could say stock is overflowing. Alright, I’ll stop, I’m sorry. 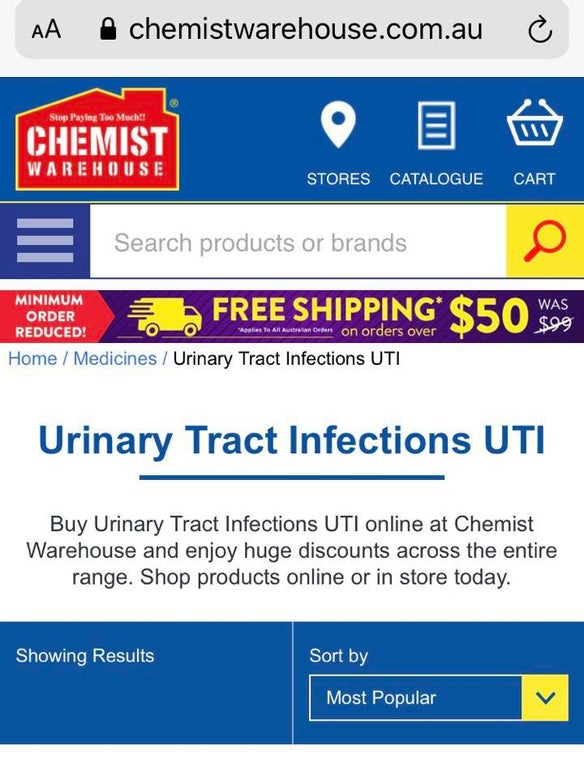 “There’s my Christmas shopping done!” wrote one Redditor in response to the post, which debuted on r/Australia.

“Speaking from experience, over-the-counter meds will treat the symptoms, but likely won’t treat the infection itself,” wrote another, who offered their handy UTI tips, just in case someone wanted to buy themselves a UTI.

Meanwhile, another Redditor decided to give an explanation as to what the hell is going on at Chemist Warehouse, and why its website is showing this weird message.

“Sometimes when data meets the road, it’s not quite right,” user u/torn-ainbow wrote.

“Some web dev used a product category to generate the text there, but the product categories include wordings describing the problem rather than the solution. “UTI treatments” would work a lot better.

“Of course, the dev may be innocent because the data might have looked fine when they built it, and poorly worded categories were added afterwards.”

So there we have it, maybe Chemist Warehouse isn’t selling UTIs after all, and its just a problem with the web devs. It’s a real shame because I had a bit of leftover Christmas shopping that I needed to do, and that would have been the perfect gift for a few certain people I know.