Update: 7 News’ reporter Sean Berry has confirmed that the panel will also feature federal Labor senator Jenny Mcallister and NSW Labor MP Chris Minns. The original promo package has been deleted as it was the “incorrect version”.

No not photoshopped – but an incorrect version sent out. We have two current labor guns on our panel. Senator Jeny McAllister and Chris Minns. Watch this space – I’ll send out the correct one soon.

Tired of paying Pauline Hanson to show up on its morning show and then years later getting upset when she shows up on said morning show, Channel 7 announced an interesting election night panel on Thursday morning in a now-deleted promo package. 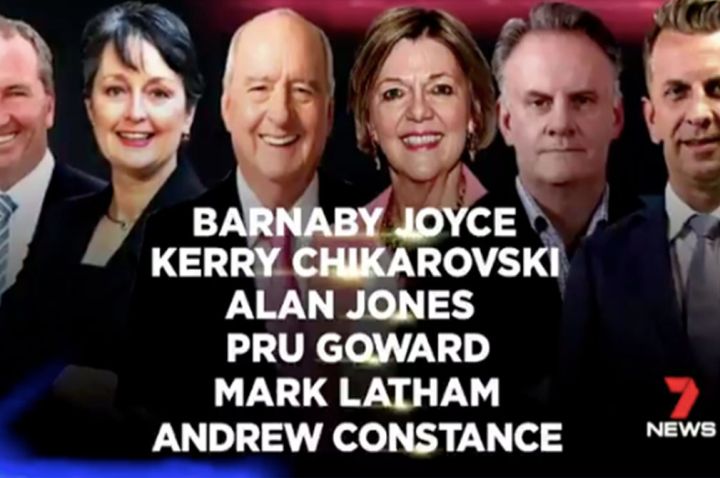 If that panel seems a little skewed to you, that might be because it is. There wasn’t anyone from Labor. There was no one from the Greens.  Instead, Channel 7  seemed to decide upon a bizarro right-wing Justice League to analyse the election.

Reporters from Channel 7 have come out since the original promo was aired to say it was a mistake, and that actually two Labor politicians would be on the panel. It’s all good, it’s happened to the best of us, I too have produced full video packages for one of the biggest news nights of the year before forgetting to include two of the guests.

In a week where the Australian media should be going through some sort of self-analysis based on its routine and lackadaisical approach to platforming xenophobic voices, the panel, old or new, isn’t exactly a winner.

Sure, Latham is a candidate – he’s the NSW One Nation leader and he’ll probably win – but it was only last week that he spouted his desire to bring on forced DNA testing for anyone claiming Aboriginal ancestry, something that’s pretty hard to defend because, generally, eugenics is pretty hard to defend. He’s also privy to a huge amount of media coverage anyway.

And sure, Seven might tout Latham’s past history as Labor leader when questioned about the balance of its panel, but the man has strayed pretty far from the guy who gripped John Howard’s hand a little too hard 14 years ago. For the love of god, he still uses the exact same Twitter account that he has previously denied was him after it was linked to a slew of misogynistic tweets.

Just picture it: Mark Latham sitting at home, tweeting from an account as “Mitch Carter, legend, of Monks Lane” and now imagine Mark Latham using that exact same account to champion himself as he runs for parliament. I mean, don’t even imagine it because that’s exactly what happened.

Meanwhile Alan Jones is going to be there too, graciously taking time from his schedule of branding Malcolm Turnbull a traitor and donating $10,000 to One Nation NSW.

The rest of the panel is made up of your standard Liberal talking heads, and that’s, like whatever. I just wish everyone could do better and try a little bit harder to create balance. You can have Mark Latham on your panel, just offer up someone as a foil, too.

A spokesperson for Greens NSW told PEDESTRIAN.TV that the party had been in discussions with multiple networks in an attempt to get MPs on panels and had sent an email to all networks just yesterday. Greens MPs will be represented on election night coverage from ABC News and 9 News.

All in all, folks, I’m pretty tired.