Trying its best to make the print media industry relevant, the Daily Telegraph today launched a front page criticising Bill Shorten for a story he told on ‘Q&A’ about his mother, running with the headline “MOTHER OF INVENTION.“ 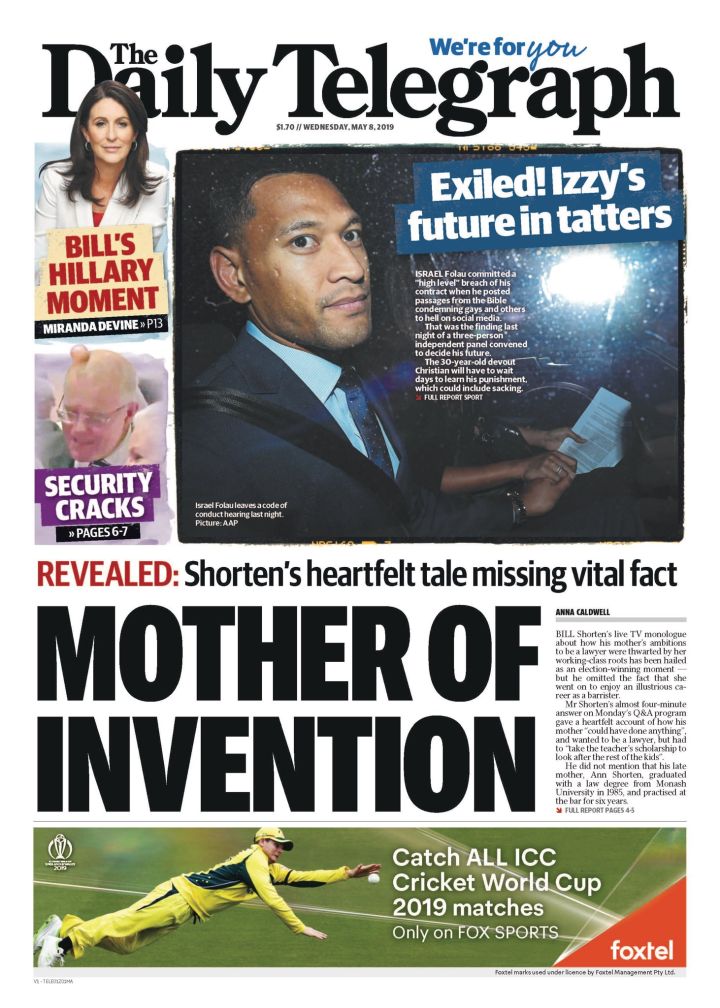 On Monday, Shorten told the ABC live audience about his mother’s career as a teacher, one she chose despite wanting to become a lawyer in order to look after her younger siblings.

Shorten’s mother, Ann, who died in 2014, took a teaching scholarship instead of studying law but did return to university in her late ’50s – at the same time as her two sons – to get her law degree. She won awards and qualified as a barrister, practicing law for six years.

It’s this note about her later life studies that has the Daily Telegraph’s state political reporter Anna Caldwell in a tailspin.

Caldwell argues that Shorten’s failure to mention his mother’s law career is true sacrilege, saying that while the Labor leader “did not lie” his omission in his story makes him seem like a “slippery salesman” that “plays straight into the Liberals‘ attack line.“

That’s interesting, because no Liberal politicians had actually come for Bill Shorten over his comments about his mother – you could argue that The Daily Telegraph and Anna Caldwell are doing the attacking instead. Fascinating journalism!

The DT also gave column inches to paid troll Tim Blair, who ran with the headline “SOB-STORY BILL SELLS MOTHER SHORT“. This is, of course, all very normal and these are totally OK things to expect of one of the most widely disseminated newspapers in the country.

Shorten responded to the Telegraph’s attack late on Tuesday evening.

“In a new low, the Daily Telegraph has decided to use my mum’s life as a political attack on me, and on her memory. They think they know more about my Mum than I do,” he wrote on social media.

“She loved being a teacher and she was very good at it. She later became a teacher of teachers. She worked at Monash University for over three decades, but she always wanted to be in the law.”

Other Labor politicians also hit back at the report, calling it scurrilous and a disgrace.

Shorten has spent parts of his election campaign refuting and hitting back at News Corp, the large media organisation that chews up a big part of the country’s mediascape. In January, he rejected a dinner invitation from News Corp owner Rupert Murdoch. Meeting with the 88-year-old during an election campaign is common: Julia Gillard, Kevin Rudd, and Tony Abbott all met with him, probably in an effort to encourage positive coverage. That’s politics, baby.