What a time, hey? And what a sentence. Truly indicative of the world we now find ourselves in.

In response to that absolute wild time on Twitter dot com, user Matt English – a bloke from Toronto with about 2.6k followers – whipped up a glorious gag in the ol’ Photoshop.

This isn’t even the first time McDonald’s has done this pic.twitter.com/ZuKEMz1Erz

Good gag. Quality gag. But that’s not what the folks over at Fortune Magazine saw. They accidentally referred to this gag as a very real, legit thing that happened.

It said: “The incident was an eerie echo of an episode in 1973, when a McDonald’s employee sent a abusive telegram (“RETIRE B***H”) to Richard Nixon under the name of then-CEO Ray Kroc, an avid Nixon supporter.”

Like, Fortune didn’t just mention the tweet. It actively researched the implications behind it, and although added to the story (I, for one, didn’t know the CEO of Maccas in the 70s was a big Nixon supporter), it failed to see the very obvious joke. One small step for journalism, one giant leap backwards also for journalism, etc.

The story now contains the mother of all corrections. 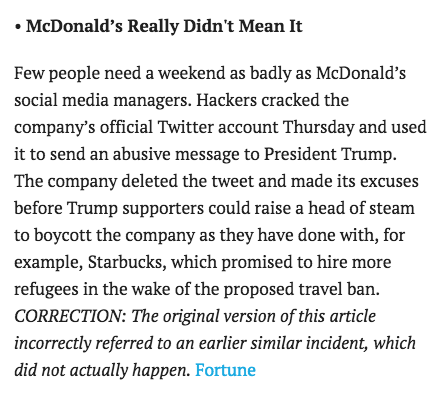 A few people are taking the absolute wrong stance on this fuck-up:

You can blame ‘old’ media for not being social media-savvy enough yet. Or stop doing unhelpful faked tweets for sweet, sweet RTs. Your call. https://t.co/4t0NTyPuP7

But at the end of the day, there’s a big, big difference between the proliferation of fake news across social media, and normal people who make jokes online that are a) funny and b) very obviously jokes.

calling me a parody account is extremely rude but I’m over it pic.twitter.com/9QRVzSguCU