“I’ve been touring for 27 years, so to have that time off, although it sucks for our careers, I’ve enjoyed being at home with my family to be totally honest,” Foo Fighters drummer Taylor Hawkins tells me from his casa in the States.

The band have just released their tenth album, titled Medicine At Midnight, and it’s unlike anything you’ve ever heard from them before. 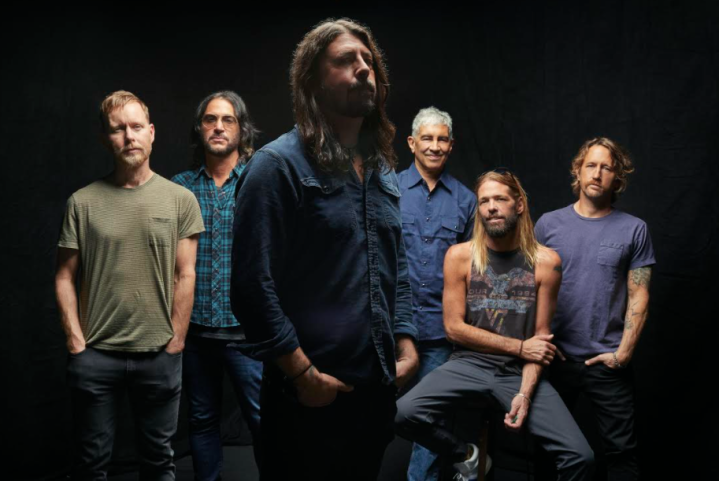 Lead dude Dave Grohl recently likened the album to David Bowie’s Let’s Dance, which is definitely a bold move for the iconique rock band, but Taylor says they strive to keep us on our toes. Mission accomplished, I feel.

“It’s really important for Dave every time we make a record to come up with something that makes him feel challenged or fresh and we always wanted to make a weird record but we only ever get halfway there and it always ends up being another Foo Fighters record with a couple of weird songs, but I think this is the weirdest record we’ve ever made,” he said.

“I mean, the first time you heard ‘Shame Shame’, you must’ve thought, ‘Is this the Foo Fighters? Could’ve been The Beastie Boys?’ I think it’s important for Dave, the songwriter, to constantly be finding  new ways of doing things.”

He says that the album is “split down the middle,” with half of it featuring “an almost groovy, dance feel” and a “disco vibe”, while the other half is “more traditional Foo Fighters, big choruses, anthem-like songs. Hard rock songs.”

They’ve been absolutely bursting to put this one out into the world for some time now, having recorded it long before the pandemic, then finishing the mixing and mastering process this time last year.

But due to obvi reasons, they had to hold off on releasing it until a year later, which hasn’t made things any less batshit, in terms of promo.

At this point we have a yarn about what it’s like to release an album during a pandemic and let’s just say it’s been ~unprecedented~, as has everything else over the past 12 months.

“You’re just kind of limited with how to market [the album] and get behind it,” he says. “Normally, you put out a record and go on tour for a few years, but that’s not gonna be the case this time. Hopefully by the end of summer we’ll be able to do a few live shows, but we’ll see how this thing goes.”

He adds that “you just have to think outside the box and come up with new ways to get the word out, whether that’s online concerts or funny little videos.”

I’ll give him this much, he’s brutally honest with me by admitting that “it’s a terrible time to release a record,” but that said, he reckons that won’t impact the album’s success as “Foo Fighters fans who listen to the whole record will be happy to have a new Foo Fighters record. And to the ones that just like the hits, they’ll be like, ‘Eh, whatever.'”

But through all the pitfalls of releasing new tunes during the pandemic comes a big fat plus: they’re giving us some sweet, sweet music to enjoy while we’re hunkered down.

“If people need stuff to bring a little bit of light and joy to their lives right now, ‘cos let’s face it, a lot of people are really struggling out there, especially with work and all that stuff,” he says. “And even struggling from just being inside and not being able to go out and interact like human beings do. So hopefully the record will give some light and joy to those folks.”

Despite having been a vital member of the Foo Fighters since 1997 and watching the band take the fuck off, he says it still blows his fkn mind that they’re still killing it after all these years.

“I could never have even imagined the band lasting as long as it has, or being as successful as it is,” he says. “One can always hope and work towards that goal of being around still and all that but at the end of the day, no I never saw it lasting this long.”

He continues, “It’s pretty crazy, for my age bracket, it’s one of those things where you just didn’t think it would last that long.

“For the first four or five records, we just didn’t think past that record. We just thought ‘Oh this could be the last one.’ And maybe we’ll just continue to make records ’til we can’t move our hands or sing anymore.”

In addition to his incredible drumming skills, Taylor is perhaps best known for his epic, flowing locks. His hair is so glorious, in fact, that it has its own Twitter page with quite the following.

“That’s not me, that’s our tour manager, Gus Brandt. He just thinks my hair is so interesting. It’s kind of ridiculous, isn’t it?” he says.

“I don’t really do social media myself. I really don’t. I don’t even know how any of them work, so I have to have other people doing stuff like that. My tour manager just started taking photos of my tour randomly and he decided to set up a page. It’s pretty ridiculous. It’s so silly.”

Silly, but oh so entertaining.

Here’s me in 1991 most likely listening to @janesaddiction and inhaling from a jazz cigarette. pic.twitter.com/JLeWdAQJzA

After charting the epic past of the band, I got him to (sort of) answer the salient question: how many more years does the band have left in it?

“I hate to even speculate because if I say forever, it will be over next year,” he says. “It’s better just to say ‘I don’t know’ and we’ll see how we go.”

And see, we will.

The band’s tenth album Midnight Medicine is out now.