We all bang on about having it way harder than our parents did when it comes to wages and housing prices. So, let’s see if the money is where our mouths are, hey? We’re going to suss out what a difference a generation makes. Before we zoom right in on one specific mother-daughter duo, let’s get the big picture.

68% of you reckon you’re not in a better financial sitch than your parents were at your age. 58% of you said the main difference between your money situation is that they owned a damn house at your age, while 14% said the biggest contrast was uni was free back in their day. But 25% also said a big difference is they earn way more than their parents did.

When it comes to the best money advice that parents passed down, the most common responses people hit us with were around not spending above your means, not using a credit card and put a little bit of extra money towards the big things like mortgages, super or savings accounts.

Research shows that there is indeed a growing wealth gap between younger and older Australians, with a risk that young Aussies today may be the first recorded generation worse off than the one before them. Yikes. While household wealth has grown across all age groups over the last 30 years, it grew fastest in households aged over 55. Wealth for younger Aussies hasn’t shifted much in the past decade.

Let’s dig into one specific example for all the juicy personal comparisons.

Laura is currently 25 and a casual teacher. Her mum, Maria, is now in her 50s. She casts her mind back to 1993 to see how her money sitch back then stacks up against her daughter’s now. While their situations are world’s apart in some ways, they’re also similar in others. 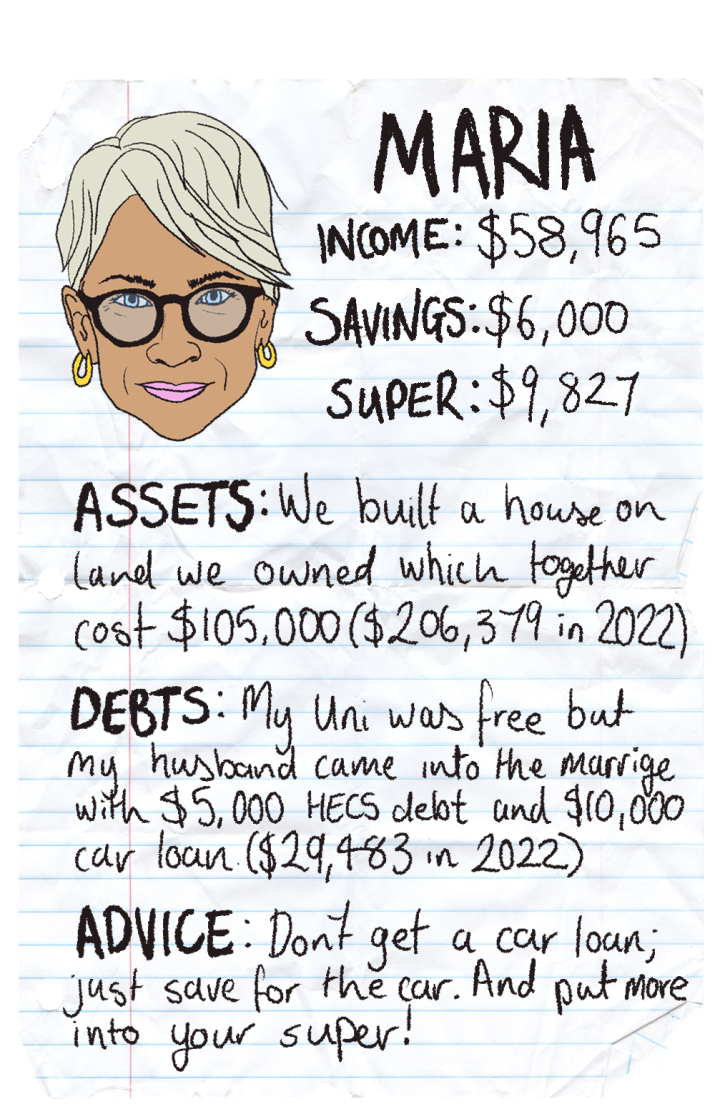 How much did you have in your savings?

It was all going towards my wedding and honeymoon. We probably had $6,000 saved.

Did you have any assets?

How much was in your super?

Did you have any debts?

No, I don’t think I had any credit cards or anything. When I got married, my debt was alright but Chris had a $10,000 car loan. So, we were about to get married and I was inheriting his debt and going to help pay it off.

What money lessons did you learn and want to pass on to Laura?

Not to get a loan for a car. I had a loan which was $10,000 that I would have paid off by the time I was 25. But in hindsight, I would have saved up for a car. I didn’t actually realise I could pay it off quicker. I had no idea. So, I just let that loan go over so many years, like five years or something.

And super, definitely put in more, to start with even just $20 a paycheck. That was my thing. Because I never did that.

And oh, dumb things like I went to a chiropractor three times a week for about nearly a year when I was in my first year out of nursing because I had a bad back. It was just such a rip-off and stupid and I was just young and believed them. It was really bad because it cost me a lot of money. I wasted heaps of money. 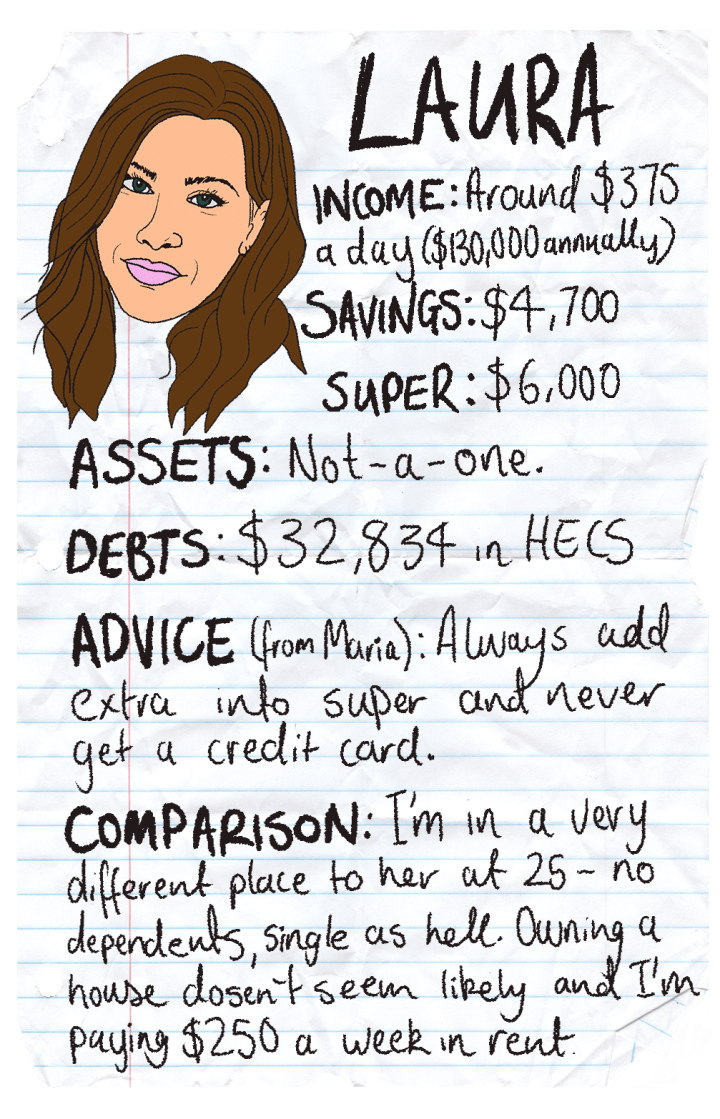 What is your income?

I’m a casual teacher so I get like $373 per day. That changes depending on how many shifts I get that week (and the tax gets taken out). So, about $2500 per fortnight if I work every day. There’s a teacher shortage at the moment which means that casuals are getting slammed. I’m basically working full time on a casual rate.

How much is in your savings right now?

I have to make sure I’ve got savings because over school holidays, I don’t get paid. All up in my bank at the moment I’ve got $4700. But a lot of that has to be saved for the school holidays and things coming up.

Do you have any assets?

How much is in your super?

I just checked my super balance and I realised that in one I’ve got only one cent. But the other one has close to $6000, which I don’t think is a lot, but I don’t know much.

Do you have any debts?

What financial advice did Maria give you?

Mum always told me to add extra to my super and I have never followed that but I know I should. She always said don’t get a credit card – and I haven’t, which has saved me because I can see the danger that could happen.

How do you think your financial stitch compares to Maria’s?

It’s a little bit nuts that she was able to get a deposit for so cheap. I’m renting at the moment. It’s $250 a week with a roommate, which is more than I would have liked to pay, but it’s all I could. I’ll probably be renting for a long time. Maybe I’ll own property later on in life if I’m married or have someone to save with, but at the moment it doesn’t seem likely.

I’m just at a very different place in my life than she was – no dependents, single as hell. I think I’m paid very well as a teacher but I feel like I know less about my money than she did at the time. I’m kind of just hoping I’m doing right.

I suppose the one certainty is we’re all going to fuck up something along the way. Maybe you’ll make the same mistakes as your parents, or maybe you’ll overcorrect what you saw them do. Whatever it is, try to stay ahead of them by tracking all your finances with an app like Money by Afterpay.

The more you know early on, the earlier you can rectify your errors!