A new film adaptation of Roald Dahl‘s The Witches is coming our way with Anne Hathaway cast as the sadistic queen bee of the coven, the Grand High Witch.

Variety reveals that Hathaway was holding the offer for both the Robert Zemeckis / Warner Bros. flick and the Sesame Street film and factoring in the scheduling for both movies held up the process of making the deal. But it looks like her people have worked their magic (hehe) and she’ll be starring in both.

As with the 1973 novel, the movie tells the story of a 7-year-old boy who has a run-in with real-life witches of the scary, creepy, kid-torturing variety.

An insider told the publication that unlike the 1990 version of the flick starring Anjelica Huston, this time ’round they’ll be sticking to the book for this one and following the original storyline more closely. 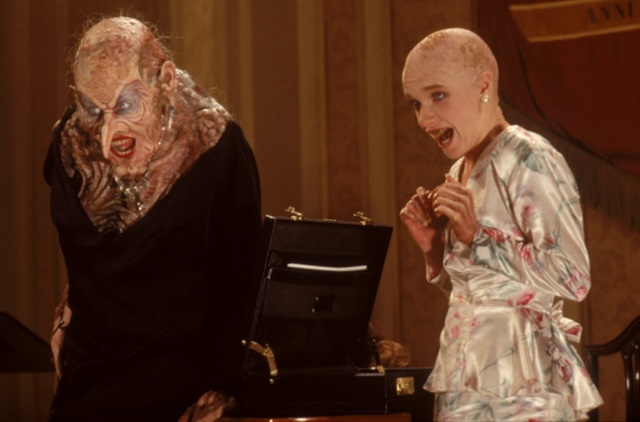 Zemeckis is also set to write the script as well as produce with his partner Jack Rapke through their banner ImageMovers, along with Alfonso Cuaron and Guillermo del Toro.

The flick will reportedly change the story’s setting to the Gothic South and have distinct sociological overtones.

Grandmamma loves to tell about witches. Real witches are the most dangerous of all living creatures on earth. There’s nothing they hate so much as children, and they work all kinds of terrifying spells to get rid of them. Her grandson listens closely to Grandmamma’s stories—but nothing can prepare him for the day he comes face-to-face with The Grand High Witch herself!

In case you’ve blocked out any memory of the original flick after being scared to the shithouse as a kid, cop the trailer below: