The British Government – the actual government – would really like you (and Netflix) to know that The Crown is fiction. Wow!

Oliver Dowden, secretary of state for culture, media, and sport, told The Mail on Sunday that while The Crown is extremely well-made, Netflix should make it absolutely clear that it’s just a work of fiction.

“It’s a beautifully produced work of fiction, so as with other TV productions, Netflix should be very clear at the beginning it is just that,” he told the newspaper, via Deadline.

“Without this, I fear a generation of viewers who did not live through these events may mistake fiction for fact,” Dowden said, adding that he will be writing to Netflix this week as well.

For what it’s worth, The Crown is tagged under ‘Political TV Shows’, ‘British TV Shows’, and ‘TV Dramas’ on Netflix.

Anywho, Dowden’s words come after our very own ABC fact-checked The Crown‘s Australian episode, which included an interview with then-Prime Minister Bob Hawke on Four Corners.

Aussie actor Richard Roxburgh starred as Hawke, playing him as an avid supporter of the Australian republic movement.

Roxburgh’s Hawke even described Queen Elizabeth II (Olivia Colman) as an “unelected non-Australian, who lives on the other side of the world, and for all good intentions, is a different breed.”

“You wouldn’t put a pig in charge of a herd of prime beef cut even it did look good in a twin set and pearls.”

The ABC absolutely ripped into that.

Four Corners even went through TV guides from the time to fact-check the date The Crown thought the interview took place, which turned out to be incorrect. 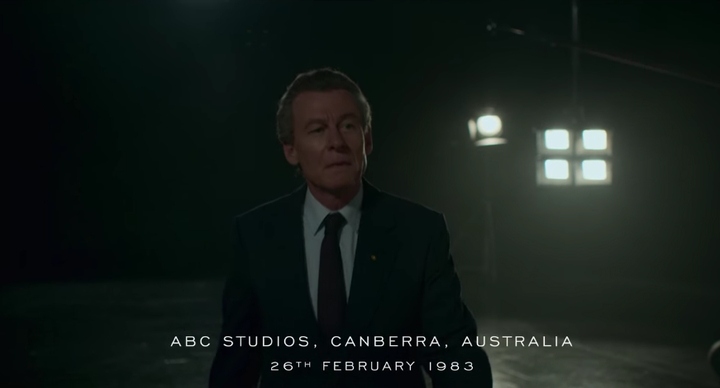 “Firstly, the 1983 Bob Hawke interview you recreated in season 4 was in fact from February 12, not February 26,” Four Corners wrote across its social media pages.

“Secondly, the Hawke interview was in Melbourne, not in our Canberra studios as you say in the show (although we’re impressed with your knowledge of our nation’s capital).”

“And while we’ve enjoyed your creative license, Hawke did not call the Queen a pig on our show and say, ‘You wouldn’t put a pig in charge of a herd of prime beef cattle, even it it does look good in a twin set and pearls.’”

I, for one, am shocked a drama series embellished the truth for the, uh, drama.

The Crown‘s fourth season is set in the 1980s, and follows the doomed marriage of Princess Diana and Prince Charles. It also follows Margaret Thatcher‘s (Gillian Anderson) 11-year reign as prime minister and her relationship with Queen Elizabeth II.

You can find all current seasons of The Crown (fiction, drama series) on Netflix now.