CONTENT WARNING: This article discusses sexual assault. If you would like to speak to someone about the issues raised in this article, please call 1800 RESPECT on 1800 737 732.

Yesterday, a Los Angeles-based model exposed the predatory behaviour of celebrity photographer Marcus Hyde by sharing screenshots of DMs he had sent her where he demands nude pics in exchange for a photoshoot.

As her story made international news, other models have come forward to Instagram account @Diet_Prada with similar sickening stories about Victoria’s Secret photographer, Timur Emek.

Model Haley Bowman took to her Instagram story to reveal that he once abused his power against her when she was 19.

She recounts Emek snapping some photos of her at a festival, then when she asked how she could have access to them, he said he “wasn’t sure what would be published, but that he could take more pics later on, after the festival.”

Coincidentally, they were staying in the same building.

He invited her to his private apartment and she texted her mate to let her know where she was just in case.

“He took about three photos of me before pulling down my shirt,” she recalls. “I nervously pull it back up. He then pulled the other strap down and snapped a bunch of photos while I was exposed.”

“Now thinking of an exit strategy, I start fideting.”

Well, here goes nothing. Since posting on my story, I’ve received several messages outlining similar nightmarish situations with this gross motherf*cker. Swipe to the 10th slide to read just one of them. Also: PLEASE SHARE THIS. SEND IT TO ANYONE WHO FOLLOWS HIM. I’m obviously not posting this on my feed because I think it’s going to help my career (quite the opposite), but because it needs to be exposed, simple as that. @timur you’ve had your fun and it’s over. . . . Thank you @diet_prada for using your platform and giving me a voice, you’re incredible ✨

She continues, “All of a sudden, he grabs my hand and puts it on his junk – he was fully erect, btw.”

Bowman says she then “pulled away and he pulls his pants down all the way. He grabs my hand again to put it on his junk, I pull away, citing a boyfriend.”

“He grabs me again. This goes on for what felt like years.”

After recounting her story, she then writes: “People like this don’t assault their ‘real’ clients. They assault people who they think can’t take them down, who don’t have a voice in the industry.”

“It may have been 5 years, but I have one now, and I refuse to watch others like him fall while he carries on working, untouched.”

She concludes, “Just IMAGING what he does with all the photos where you might not be covering a certain spot…”

Bowman later shared a screenshot of a DM that was sent to her from a model who recounted a similar story with Emek: 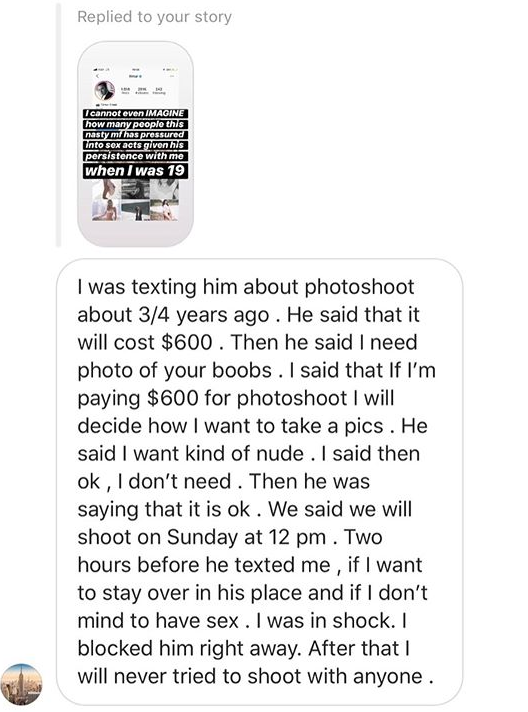 Canadian model Julia Francina also shared a screenshot exchange with Emek to Diet Prada from when she attempted to tee up a photoshoot.

He also offered to “help” her gain clout in the industry in exchange for “some fun”.

When Francina asked him to clarify what he meant by this, he wrote: “I am a man… think about it :-)”.

Turkish model Deniz Tekin also DM’d the Insta page, telling them that Emek once lied to her about having approved a topless photoshoot with her agency which never happened as he was already on their photography blacklist for his sketchy behaviour.

See the screenshots that both women sent in to Diet Prada below:

@Timur Emek, you may as well delete your account now lol. The New York-based Turkish photographer who has shot for @victoriassecret , is the latest to join the ranks of sleazy, clout-abusing celeb/supermodel male photographers who feel entitled to women's bodies. Along with the forced crotch-grabbing account from @byhaleybowman , Emek also offered "help" in the industry to @lizamarieju in exchange for "some fun". His response when asked to clarify? "I am a man… think about it :-)". ????????????. The photographer also went as far as lying to Turkish model @deniiztekiin in June 2017, telling her that her agency at the time had already approved a topless shoot, which of course didn't actually happen as he had already been on their agency blacklist of photographers. It's a relief to know that there are agencies out there that refuse to be complicit and hopefully more will step it up, but for every model with an agency, there are dozens of girls who are navigating independent modeling work on their own. The stories on the rest of the slides are unfortunately all too familiar. #TimesUp for these shitty men. • #model #instagrammodel #timuremek #photographer #model #supermodel #celebrity #predator #creep #victoriassecret #runway #vsfashionshow #modelingagency #alessandraambrosio #candaceswanepoel #vsangel #romeestrijd #clout #lame #womensrights #power #liar #dietprada

Emek, who has a blue tick on Instagram and boasts 201k followers, has since changed his account to private.