So, Jennifer Lawrence went on the Ellen show to discuss the Red Sparrow premiere which ICYMI, she was obvs ‘hammered’ at because Jen needs a strong drink to get through press releases. Really, she said it herself.

Very drunk Jen is apparently a completely new person – her alter ego – Gail, and no that’s not Gale from the Hunger Games. Although as Jen revealed, Gail is quite masculine.

It’s kinda hard to explain so here’s what Jen herself had to say:

“Every time I’m drunk I turn into this – I think she’s some kind of [literally don’t know what she’s trying to say here and neither does Ellen by the look on her face] I don’t always turn into this masculine alter ego that jumps into shark-ridden waters just to make my friends laugh. It’s not every time but I think it might be rum.”

The main point is – Gail is bloody wild. One time while conch diving, the driver of the boat held up a conch and pulled a worm out of it. Gail/Jen proceeded to grab the warm, eat it and then do the same thing with the rest of the conches they found. THEN, the driver showed them this area in the sea where all the fisherman gut fish so there are tons of sharks around and Gail/Jen literally dived into the shark-infested water.

Anyway, she fully insists she’s not that big of a drinker when Ellen whips out pics from the premiere and they will make you GIGGLE. Look, Jen’s a beautiful woman but the pics are so bad she even literally runs away from it.

Here’s a snap from the interview and yes, that is Jen re-enacting it. 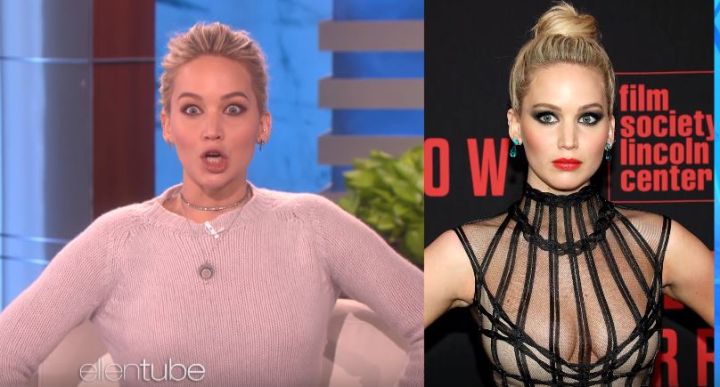 Before the premiere, Jen was on Andy Cohen’s radio show where she had a lot of wine, and then she went on The Late Show With Stephen Colbert who had also heard about Gail and so gave Jen some shots of rum and well another alter-ego was born. Jen’s not sure of the name yet but it ends with an ‘e’. She thinks it might be Veronica-e.

In Jen’s defence she did try and sober up with water and coffee but it just didn’t work and the premiere ended up being a whole lotta, “Don’t look drunk”. Let’s be real though, we’ve all be there.

But honestly, the best part of all of this has to be the discussion of drunk Jen at Ellen’s birthday party earlier this year ‘cos somewhere toward the end of the night Jennifer Lawrence and Jennifer Aniston had their arms wrapped around each other saying, “No, I love you more!” Ah, alcohol.

Please enjoy the full video below: