Welp, this is probably the most unassailably cute thing you’re gonna see all day: Sesame Street is turning 50 this year (50! Ha ha ha) and in recognition of one of the more culturally significant TV shows in the history of the medium, New York City officials honoured the show by naming a Manhattan street after them.

As in, there is now an actual, very real, no fooling Sesame Street. On the map. Forever. How bloody cool.

NYC city leaders officially renamed W 63rd and Broadway, a stone’s throw from Central Park, in honour of the iconic and enduring kid’s series in a formal ceremony overnight.

Flanked by NYC Mayor Bill de Blasio, Sesame Street sent Big Bird, Grover, and a host of others to accept the honour, with Big Bird even throwing on his best and fanciest tie for the occasion.

Now anyone can visit Sesame Street in New York City!@SesameStreet brings joy and respect to this city and beyond. We're so grateful that they call New York City home. ❤️ pic.twitter.com/6kwpdpEfQV

It may be slightly cloudy in New York City today, but it was sunny over on Sesame Street as we joined Big Bird and the whole crew to officially co-name West 63rd Street and Broadway. pic.twitter.com/Fm0etuviLu

Absolutely delighted that a block of W. 63rd Street was officially co-named @sesamestreet this morning! @NYCMayor de Blasio and I were also thrilled to celebrate Sesame Street's 50th anniversary! Sesame Street has brought joy & learning to countless children of every background. pic.twitter.com/1Tj7uo6rIO

At the renaming of West 63rd and Broadway “Sesame Street,” the city’s official Big Bird — and the mayor who’s often called that — appear within feet of each other pic.twitter.com/rbzcOLR7Jf

It’s official. We can now all get to Sesame St. @NBCNewYork pic.twitter.com/DGNjlnfp0b

How sweet and cool is that!

The Sesame Street gang didn’t limit their time in New York to just the ceremony either; Grover and Elmo took some time out of their busy schedule to do a little sightseeing, which included a trip to the top of the Empire State Building and one of the cutest photos of all time.

.@Elmo and @Grover are waaaaay up at the top of the @EmpireStateBldg looking for Sesame Street! Join us today as we rename 63rd Street and Broadway “Sesame Street” in honor of our 50th anniversary! https://t.co/JChs5OAwHs pic.twitter.com/I5PpIrPVHp

If you happen to be swinging through New York anytime soon and want to add it to your list of things to see, it’s right here near the south-western end of Central Park. 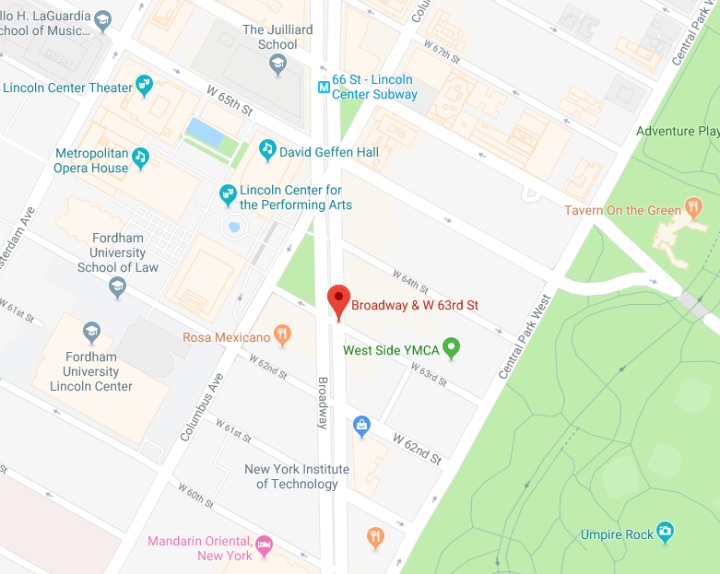 How’s that for location? Right near Julliard and Geffen Hall, spitting distance from Tavern On The Green, and right across the road from a dang Duane Reed.

It’s a tick in every box.