Kendall Jenner is set to cough up a large chunk of the cash she was paid by Billy McFarland to promote the binfire that was Fyre Festival back in ’17.

In a recently-settled lawsuit, Jenner agreed to pay back $90kUSD from the $275kUSK she was given for one social media post promoting the gig-that-never-was.

“So hyped to announce my G.O.O.D Music Family as the first headliners for @fyrefestival,” Jenner had written, in the now-deleted ‘gram post. “Use my promo code KJONFYRE for the next 24 hours to get on the list for the artists and talents afterparty on Fyre Cay.” 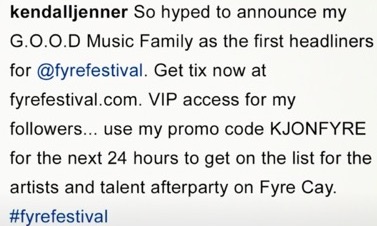 The documents discuss Kendall’s mentioning of the GOOD Music team, which Kanye West is the founder of, claiming that the phrasing of the post “intentionally led certain members of the public and ticket purchasers to believe” ‘Ye would be in attendance.

McFarland is currently serving a 6-year prison sentence for the clusterfuck that was Fyre Festival.