Without a doubt, and do not EVER @ me on this, Dawson’s Creek‘s Pacey and Joey were the all-time best couple to grace TV screens in the 00’s. And yes, it is the 00’s – are you actually going to come for me, the Ultimate Dawson’s Creek Fan, on this? The unlikely pair hooked up for the first time in Season 3, which aired in 2000. Dawson’s Creek trivia night, come at me.

Anyway, all of us Dawson’s sad-cases got very excited this morning with the reveal of the cast reunion Entertainment Weekly shoot. 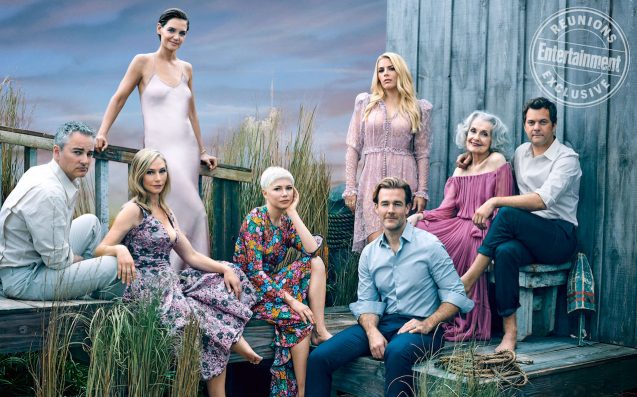 But you know what is even more exciting? This level of touchy-feely between Katie Holmes and Joshua Jackson.

I thought I was over my high school obsession with #DawsonsCreek … then I saw this GIF of Pacey & Joey and my heart exploded.pic.twitter.com/IXVdeZORza

I have A LOT of Pacey ♥️ Joey feels seeing Josh lean in softly against Katie’s shoulder… Like a lot, a lot. ???? #DawsonsCreek #DawsonsCreekReunion https://t.co/5VDHSit38L

Fans are even picking up that their poses are mirroring their iconic ones from the 00’s.

Not to mention, they shared a damn hat.

The hat is Pacey and Joey's love and they are STILL WEARING IT! #DawsonsCreek #PaceysCreek pic.twitter.com/OM2GhpAidA

I feel like since I didn't get a Joey/Pacey cover, I'm going to imagine Katie stole Josh's hat and that's that #DawsonsCreek pic.twitter.com/XI0uEw4IEn

I know, I KNOW. Katie’s all loved-up with Jamie Foxx. I don’t even care, these two (yes, they did actually date IRL once guys so this isn’t far-fetched) are genuinely meant to be.

In the meantime, catch me deep inside Season 3/4.