Reality star Jessica Brody has apologised for sharing mixed messages on January 26 regarding her thoughts on Invasion Day.

After telling fans that she would never celebrate Invasion Day, the Bachelor In Paradise star shared a bunch of pics from an Australia Day themed event which she attended alongside other Bachie stars like Jackson Garlick.

As shared by the So Dramatic! podcast, after being called out by a fan in her DMs, Jessica Brody rudely responded, “No worries, I won’t promote equality again x.”

Jessica Brody later came to her senses and decided that apologising for her actions and promising to do better in future was a more favourable way to go than abandoning the fight for equality.

“I attended an ‘Australia Day’ themed event yesterday and saw it as nothing but spending time with friends after a year of isolation,” she wrote on Instagram.

“I understand what I did was tone-deaf and inappropriate as I’ve always tried to be a voice against systemic racism.”

She concluded, “Honestly, I feel shit but all I can do is try and learn and grow from this.” 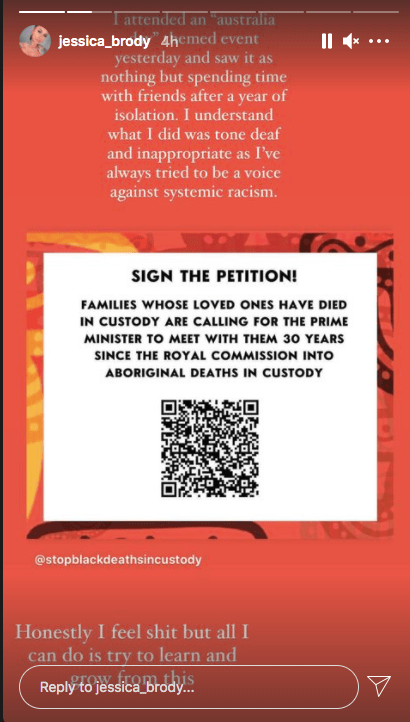 In a subsequent set of IG Stories, Jessica Brody denied claims that she’s being “performative” and stated that she’s been attending equality rallies for the past decade “before it was trending.”

She said she’s “trying to be a better person and advocate and use her platform for a good purpose.”

Jessica Brody appeared on the most recent season of Bachelor In Paradise as well as in Matt Agnew’s season of The Bachelor in 2019.

It comes after P.E Nation founder Pip Edwards was called out on Instagram for her contradictory and “tone-deaf” posts yesterday.