The London photocall for new Russian spy thriller Red Sparrow is raising eyebrows for the fact that while the four men are bundled up in expensive coats and sensible shoes, Jennifer Lawrence is somehow forced into a fundamentally weather-inappropriate dress.

Of course, she looks incredible. That’s not the point.

#JenniferLawrence arrived in a velvet #VersacePreFall18 gown with gold Medusa buttons and a high front split at the ‘Red Sparrow’ photocall in London. #VersaceCelebritieshttps://t.co/3RxPsl4NwR pic.twitter.com/cF0Cr0qqy4

But here’s director Francis Lawrence (no relation), Matthias Schoenaerts, Joel Edgerton and Jeremy Irons in long pants, snug jumpers, and what I’m dubbing power coats. Edgerton appears to be wearing two of them. 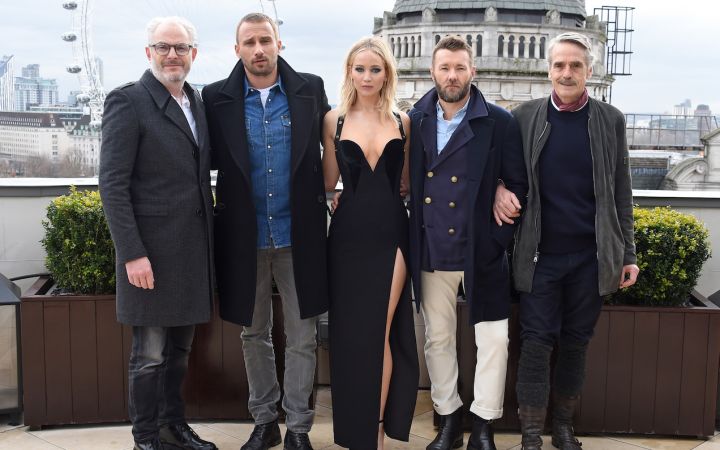 “This is such a quietly depressing (and revealing) image,” said writer Helen Lewis on Twitter. “Not least because I’ve been outside today and it’s bloody FREEZING. True equality means either Jennifer Lawrence getting a coat, or Jeremy Irons having to pose for a photocall in assless chaps.”

This is such a quietly depressing (and revealing) image. Not least because I've been outside today and it's bloody FREEZING. pic.twitter.com/BRnmgKJ5wY

“Yup,” agreed Zelda Williams (daughter of the late Robin Williams). “And the sheer number of men I know who come to press junkets freshly rolled out of bed when their female counterparts have been up since 4am going thru hair and makeup. The expectations women are expected to fill physically in order to be considered ‘hardworking’ are ten fold.”

Yup. And the sheer number of men I know who come to press junkets freshly rolled out of bed when their female counterparts have been up since 4am going thru hair & makeup. The expectations women are expected to fill physically in order to be considered ‘hardworking’ are ten fold. https://t.co/lORhixC9t7

She added: “There are usually handlers right out of shot to take purse and bag for photos. Photos you’re expected to take to promote the movie. And if you promote poorly, you get hired less. ‘Forcing’ isn’t the convo. Ridiculous expectation is.”

Look at the state of this picture. Equality means you get to wear a fucking coat https://t.co/OKPJYiTcGp

Lady Bird director Greta Gerwig also spoke of this exact same thing a few days ago, whereby “this exact thing” is the unequal expectations made on men and women when promoting a film.

“You know the phrase, ‘Gingers Rogers had to do everything Fred Astaire did, but backwards and in heels?'” she told Adam Buxton on his podcast. “That’s literally what women have to do when they do all of this stuff. So in the process of releasing a movie is and how that works is – they’re doing all the press that the men are doing, and they’re in heels, and they’re all gussied up, and they are, then scrutinised for how they look or don’t look, and it feels like this crazy gauntlet that they have to walk.”

“Not that there’s anything wrong with dressing up and looking nice,” she added. “It’s super fun to dress up and look nice, it just feels like when there’s an overtone that your self worth is being evaluated on the basis of how you look, that seems like the wrong direction to go in. if it’s a celebration and it’s fun and you feel great, then great. But if it’s something where you feel anxious that a bunch of people are going to say she looks like trash, she’s gained weight, you’re like ugh, god. Yeah, we’re stressed.”

“These things will seem very odd in the future, I think,” said Buxton.

“I do! They will seem odd,” agreed Gerwig. “I think a lot of this will seem odd. I hope it starts seeing odd pretty quickly.”

At least Lawrence was allowed a coat to and from the photocall.

She herself has spoken in the past about the consequences of agency, saying that she was branded “difficult” for standing up against a director who “said something fucked up to me”.

“I was called difficult and a nightmare,” she said in The Hollywood Reporter‘s roundtable with Emma Stone, Mary J. Blige, Jessica Chastain, Allison Janney and Saoirse Ronan, talking about the culture of abuse in Hollywood.

“I think a lot of people aren’t coming forward because they’re afraid they’re not going to work again. You need to be able to say, ;This is wrong’ and have somebody do something about it instead of saying, ‘Oh, it’s wrong? Well, you’re fired.'”