Aussie actress Samara Weaving has accidentally found herself as the face of pro-Trump propaganda, after a pic of her bloodied face was shared by the Twitter account Conservative Nation as an example of supposed violence against Trump supporters.

Here’s what happened to female Trump supporter when she met ‘peaceful’ and ‘tolerant’ liberals. pic.twitter.com/H1sUJDwQqa

But uhhhh. Yeah. That’s not real blood, and nor is she a Trump supporter. That photo is actually of Weaving in character from the Ash Vs Evil Dead TV Series, in which she plays Heather. It was shared by her make-up artist Hannah Wilson, and later published by the Daily Mail back in January.

Did… did you just Google ‘bloodied face’?

This shit is going viral. A conservative meme Facebook page – one of the worst Facebook pages a Facebook page could be – leapt on the photo, adding their own watermarks and fat meme font and twisted logic. 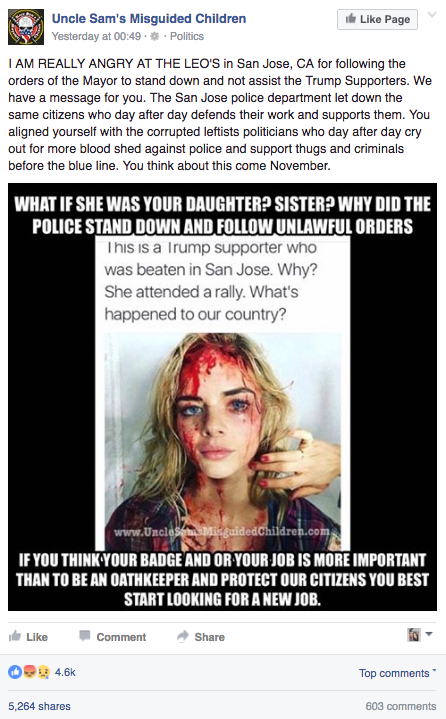 Samara is, as one could expect, not too happy about it.

“I’m not American. I can’t vote in your country. This is so stupid,” she tweeted.

I’m not American. I can’t vote in your country. This is so stupid. LOLCANO @Cons_Nation get rid of this please! https://t.co/he1LPHSoqg

I really hate this. https://t.co/VYhbOYKOWd

Obviously, she’s asking everyone to stop propagating this bullshit, but at the time of writing, neither Conservative Nation nor Uncle Sam’s Misguided Children (*shudder) have removed their factually inaccurate posts.