People announced its annual list of the sexiest men alive this week, and David Harbour, aka Jim Hopper from Stranger Things, was pretty stoked to be one of them.

Honestly, I’ve been all in on this beefy, bearded daddy since his days a closeted cowboy in Brokeback Mountain, so I’m thrilled that the rest of the world has finally caught up. 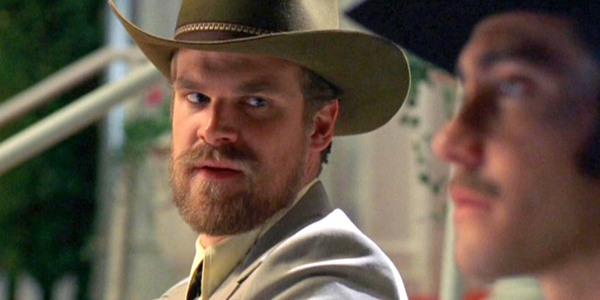 The actor recently stopped by The Late Show With Stephen Colbert to discuss what it’s like being the “king of dad bod” and one of the sexiest men alive, and quite an amusing time was had.

READ MORE
David Harbour & Lily Allen Were Papped Smooching In NYC, Crushing Up To Two Of Your Dreams

“I’m very excited,” said Harbour when the host showed him the issue, saying he was given the honour “when I had a full mustache and a 40-inch waist, so thank you, America.”

They then discussed the placement of the various other men in the issue.

“I’ll take it,” the actor replied. You can check out his full interview below.

He is currently filming a role in Marvel‘s Black Widow, and it’s unclear at this point whether he’ll return for another go-round on the Netflix show, but we wouldn’t be completely surprised.