Big Brother star Skye Wheatley has broken her silence after getting into an altercation with MAFS star Cyrell Paule at an influencer dinner.

In now-deleted Instagram Stories, Wheatley said she never meant to offend the MAFS star by asking if her relationship with Love Island alum Eden Dally is fake.

“There was no malicious intent involved,” she said.

Wheatley refuted claims made by Paule that she’s a “bully” and insisted that she’s “so against bullying.”

“I’m so open and honest as I put my life on here so if anyone asked something about Lachy and I, I’d just answer it.”

She subsequently deleted the IG Stories.

The event was thrown by parenting brand The Care Club Store and held at Palazzo Versace on the Gold Coast.

An unknown person sitting next to Cyrell at dinner secretly recorded a conversation. In the convo, Wheatley discussed the rumour that Cyrell and ex-Love Island star Eden Dally are in a fake relationship.

“I saw an article of someone saying that you guys were in a fake relationship for clout,” Skye said to Cyrell in the video.

“You were getting really upset about it,” Skye added. “But if you know the truth, babe, who cares? I was just gonna ask you because I wanted to know who said that!”

Cyrell responded by going in on plastic surgery.

“So I’m gonna ask you, are your lips real?” Cyrell asked Skye. “No, that’s an inappropriate question, so I wasn’t going to ask that.”

As Skye started laughing, Cyrell said: “Don’t be a smart ass, bitch. I will put you in your place. Eat your food or I’ll shove your face in it. Shut up.”

Cyrell shared the video to her Instagram to expose Skye’s comments.

Have a watch below via So Dramatic!:

She later dropped a series of IG Stories in which she explained what happened.

“One thing I hate most is fake bitches…” she began.

She went on to describe her evening as a night “back in high school surrounded by mean bitches that don’t know what is appropriate and what is not.

“For three years I have had to explain, approve and confirm my relationship with my partner. And tonight of all nights, I experienced nothing but female bitching and bullying from @skye.wheatley, questioning whether or not my relationship of three years WAS to this day genuine!!!” 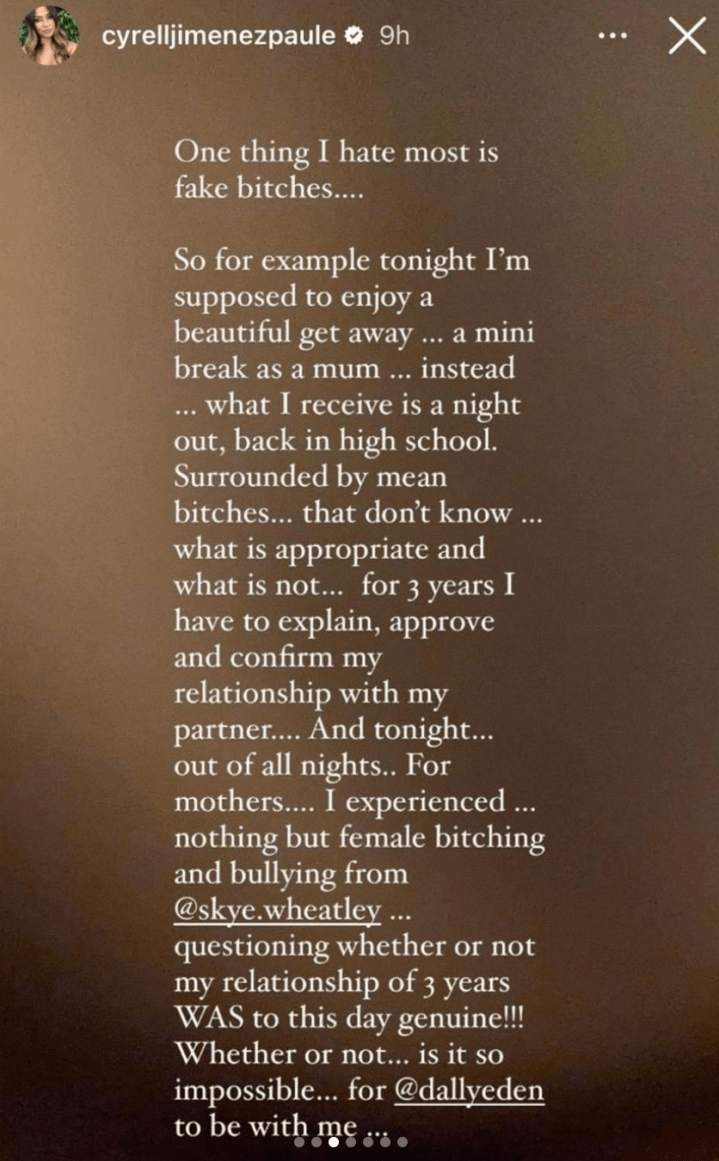 She then shared the above video and wrote: “Since a picture paints a thousand words, here’s a video of me having to explain to simple-minded, uneducated, two-faced, no common-sensed individuals. 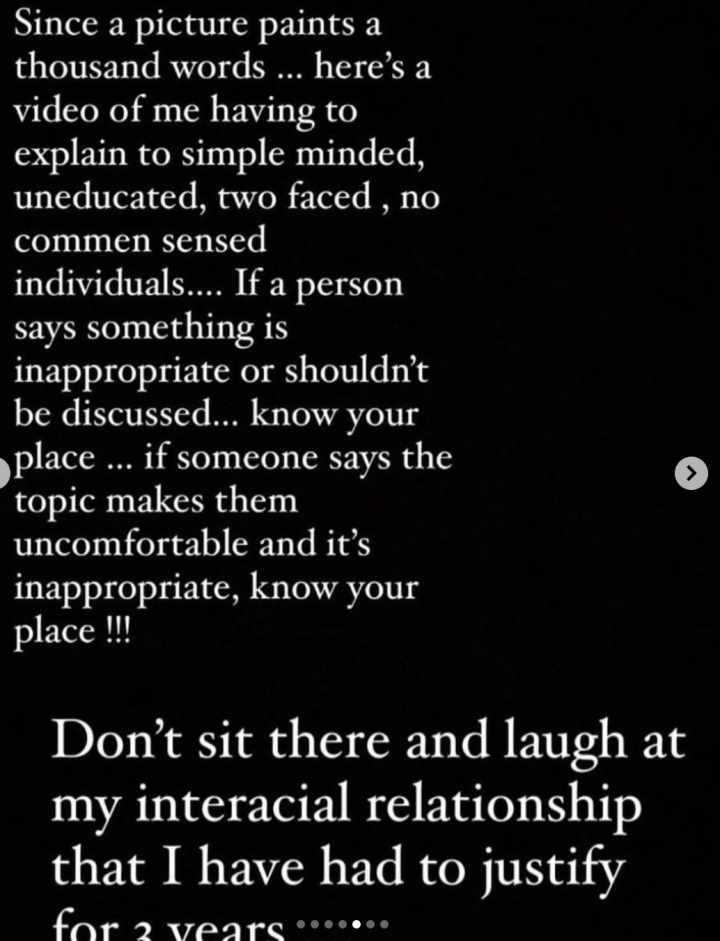 She added, “Don’t sit there and laugh at my interracial relationship that I have had to justify for three years.”

In a subsequent Instagram Story, she wrote: “For a female to see me first at the elevators and ask, ‘Oh my God, are you still with Eden’? and ‘You guys had a baby together, right?’

“But apparently not knowing my name but happened to read in tabloids that my relationship is fake and asking this at a dinner party for other mums to hear, you sure fucking know a lot about me.” 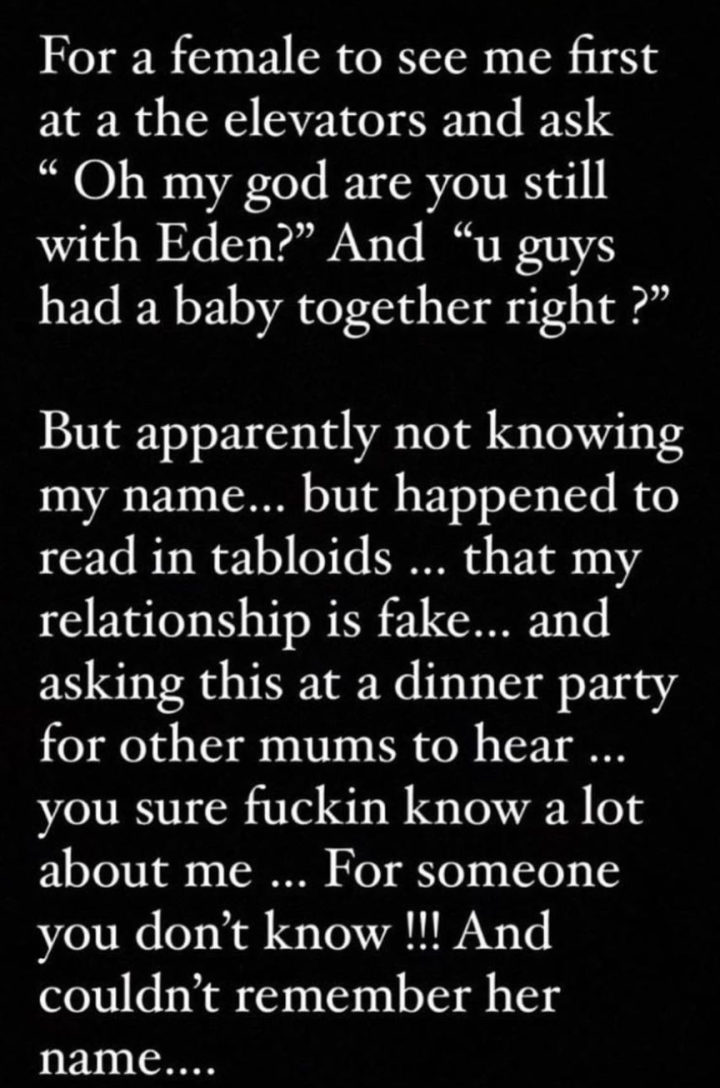 She concluded, “What people need to learn is that even though your intentions may be to just hurt me, maybe just to be a bitch to me, it affects my son.

“Your stupidity unfortunately falls back on my son and as a mother yourself, you should know when to draw the line when it affects your kids.”

She then addressed Skye directly.

“To Skye: I pity you because for a person to claim to have it all, your actions tonight proved just how little you have. Goodbye.”

She signed off from herself, Eden and their son, Boston. 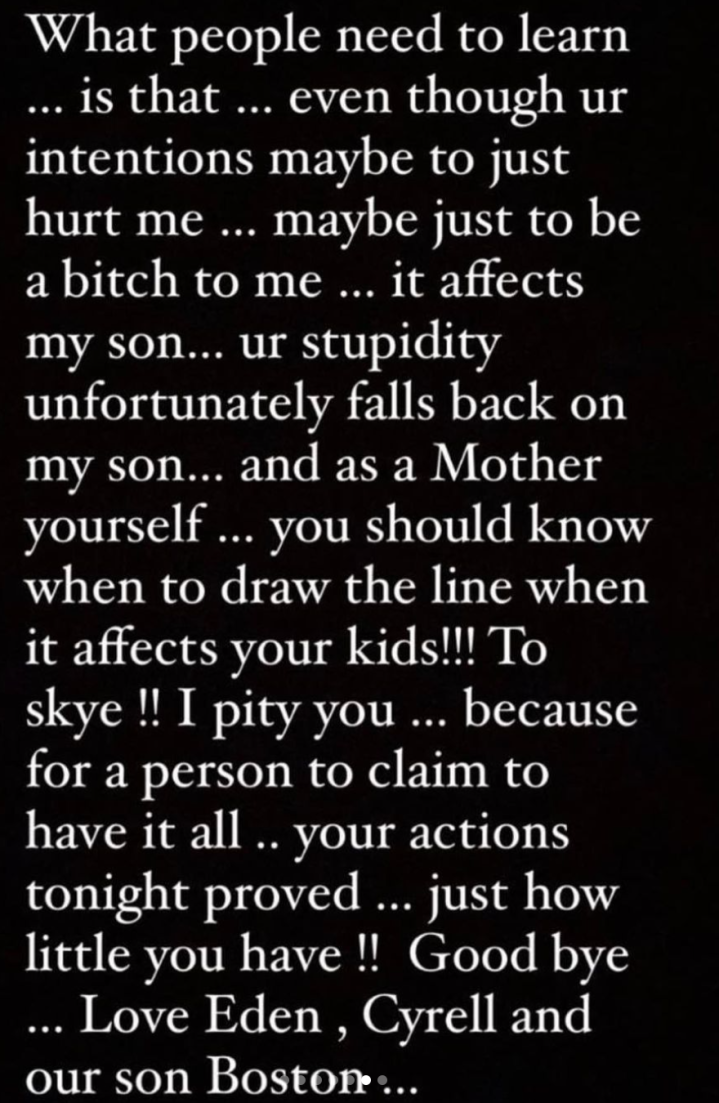 Cyrell has since deleted the aforementioned video and the subsequent IG Stories with the text from her Insta.