Like clockwork, Cyrell Paule has fired back at her Married At First Sight rivals, Jessika Power and Ines Basic, following their comments about her in the lead-up to the hotly anticipated MAFS reunion.

After flying in to Sydney to begin filming on MAFS: All-Stars, Jessika and Ines took a swipe at Cyrell while speaking to The Wash from their hotel (which, by the by, Ines allegedly scored by negotiating to get a sweeter hotel stay and higher pay packet).

An insider stoked the flames by telling The Daily Telegraph, “I don’t know how Channel 9 managed to get them all in the same room, Jessika and Cyrell hate each other’s guts. Expect drama.”

Now, Cyrell has responded to all the drama via an Instagram Story where she threatens to “slap some sense” into her haters.

Let’s get one thing straight… just because I’ve had a baby, doesn’t mean my morals or attitude has changed!!! If you want to come at me and disrespect me, I’ll slap some sense back into you. Bitch… I pushed a baby out my Hoo haa… don’t think I’ll hesitate in knocking ur ass back to last week. Best things bout reunions… ur not hiding behind Instagram anymore… say it to my face. 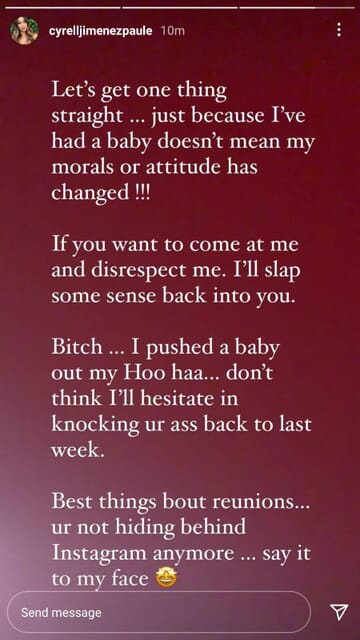 I mean… we could play dumb here and be all like ~that could be about anyone~, but the part where she references having a baby is surely pointed at Jessika’s statement about Cyrell being a mother and hoping that she “has matured a little bit.”

Filming for the MAFS reunion is officially underway, head here for pics of Cyrell and Jessika both arriving on set. Wonder how things are going, given recent events.

Not too well, by the looks, as controversial MAFS star Nasser Sultan has already yeeted himself from the reunion.

According to The Wash, Sultan quit halfway through the first episode after multiple clashes with different cast members, resulting in him storming off and going back to his hotel at 10.30pm.

“Nasser couldn’t handle the heat and just left. He told producers he only came for the headlines, money and ratings and didn’t need to listen to Cyrell swearing at him,” a MAFS source told the publication.

Head here to read what happened next. It sounds like an absolute shit fight.