Ever seen a celebrity couple and been like, ‘I’m not buying this for a bloody second?’ Well, one of our fave spicy Aussie Instagram pages, Celeb Spellcheck, has shared a sneaky cheat sheet on how to see if a famous romance is fake as fuck.

The IRL Gossip Girl did a spicy Q&A on Saturday night, which I bloody frothed as I was bored as fuck in bed and depressed because I couldn’t go to the pub. During the Q&A, she was asked if she knew of some “red flags / dead giveaways that a relationship is for PR?”

As you’ll see from the below screenshot, I snapped a pic of this one 29 seconds after it went live because I intended to read over it repeatedly as this is a topic that fucking FASCINATES me like no other. 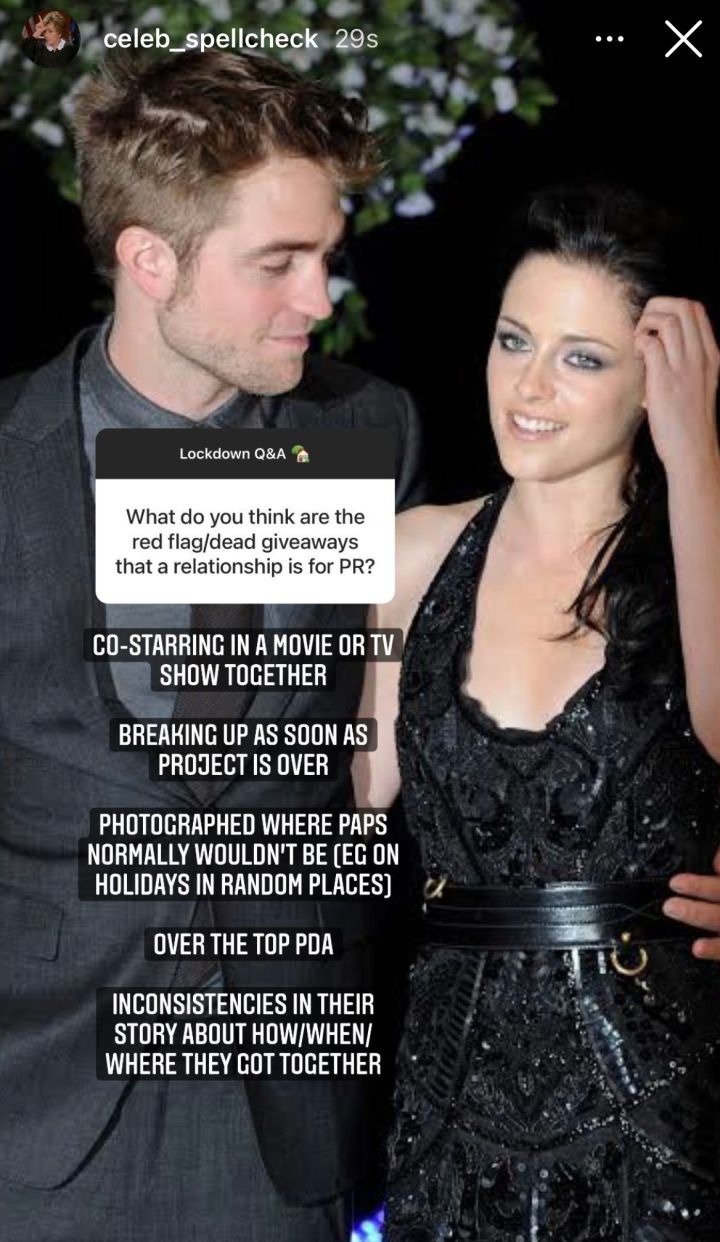 Here are the red flags that she listed:

Not to send you down a mad Reddit rabbit hole, but one of the major ~rumoured~ PR relationships of our generation is Taylor Swift and Harry Styles (how the FUCK did the paps get their hands on that pic of Taylor leaving Harry on a yacht while they were on vacay in the middle of nowhere?).

Also, can we talk about the fact that she used a pic of Robert Pattinson and Kristen Stewart as the pic here? SCREAMING.

Personally, I feel like that relationship was legit, it just blew the fuck up in a very public way.

Celeb Spellcheck isn’t the only spicy Aussie Instagram page that was on fire over the weekend as Aussie Influencer Opinions returned with a vengeance after a five month hiatus.

“I am here to support the positive and call out the bullshit,” the anonymous account admin told her followers, before sharing a series of IG Stories where she revealed that several influencers have been spreading dangerous information online.

She later revealed that her Instagram crusade against anti-vaxxer influencers copped her 5000 new followers.

“Huge response of support from last night’s posts,” she said. “Really has highlighted just how upset, frustrated and hurt people are feeling during these times.”

Head here for more on that whole shitshow.