Yesterday, Brooke Blurton shared a lengthy Instagram Story in which she explained why she and Darvid Garayeli decided to call it quits on their Bachie romance.

Brooke has now returned to her IG Stories to reveal that she’s been copping hate from a bunch of nasty IGers over her decision to end her relationship with Darvid.

Brooke shared a screenshot of some of the nasty comments she’s been copping on Insta and wrote, “If you don’t laugh, you’ll cry. I’m so glad none of these people are a part of my life or followers (I went and blocked them) because how can you just get away with being completely ignorant and hurtful to people / someone you have no idea about?????” 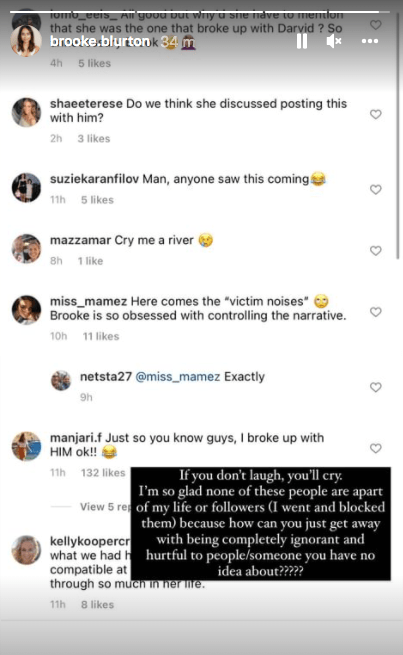 “Do we think she discussed posting this with him?” one nasty commenter wrote.

“Cry me a river,” wrote another one (how original).

“Here comes the ‘victim noises’. Brooke is so obsessed with controlling the narrative,” a third salty commenter wrote.

What’s even sadder is that most of the negative commentary appears to be coming from women who have taken this opportunity to tear Brooke down once again.

In her statement, Brooke revealed that it was her decision to end the relationship with Darvid as she has a lot of “healing” to do before she can be in one.

“I’ll be the first to say that it was my choice to end the relationship and I had been thinking about it for a bit towards the end. My reasons for that are completely valid to me,” she wrote.

“I had been unhappy for a bit and it wasn’t just solely because of the relationship. I have a lot of respect for Darvid and what he gave up for me to be IN the relationship but it seems that we both lost ourselves along the way.

“We had a very real love in a very unreal situation but we equally had A LOT of pressure on us too, which I felt I carried everyday.”