Less than an hour after we reported on the breakup announcement of Brooke Blurton and Darvid Garayeli from the latest season of The Bachelorette, there have been updates to this unfolding story which warranted a sequel.

To recap it super quickly – Darvid uploaded in an Insta story early this morning saying that he and Brooke had decided to part ways.

The Insta story featured lines such as “unfortunately Brooke and I have parted ways. Whilst we both genuinely thought we were each others person, things change and thats okay.”

READ MORE
A Welcome To Country, A Queer Kiss & A Special Rose: Bachelorette's Premiere Was Groundbreaking

However, it was notable at the time Darvid posted his story was that Brooke hadn’t written a similar announcement. Couples in the public eye will often coordinate their timing when they announce such news to their social media channels.

But at around 10am AEDT this morning, Brooke broke her silence with a six-paragraph insta story on her account. 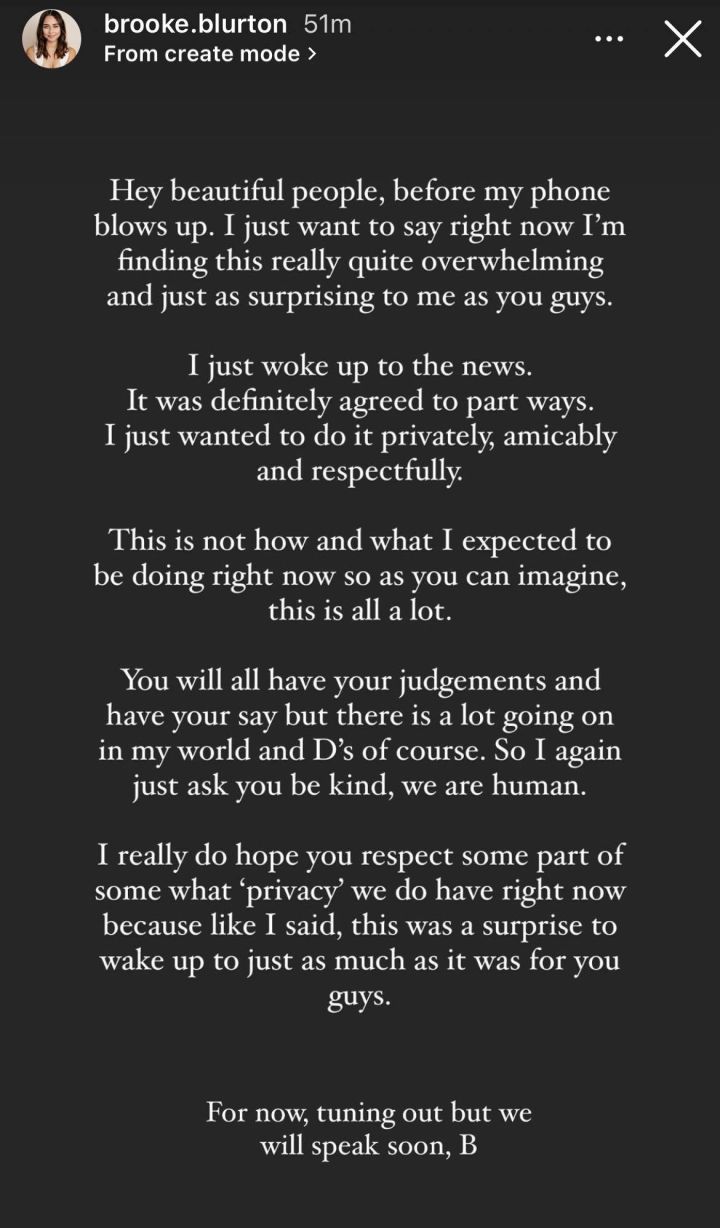 “Hey beautiful people, before my phone blows up. I just want to say right now I’m finding this really quite overwhelming and just as surprising to me as you guys.

“I just woke up to the news. It was definitely agreed to part ways. I just wanted to do it privately, amicably and respectfully.

“This is not how and what I expected to be doing right now so as you can imagine, this is all a lot.

“You will all have your judgements and have your say but there is a lot going on in my world and D’s of course. So I again just ask you be kind, we are human.

“I really do hope you respect some part of some what ‘privacy’ we do have right now because like I said, this was a surprise to wake up to just as much as it was for you guys.

“For now, tuning out but we will speak soon, B.”

At this stage, the waters definitely seem a little muddier than they were earlier this morning.

We will probably find out more in the coming days and weeks but in the meantime, we wish Brooke well and hope she can enjoy the wonders of chucking ya phone on airplane mode for extended periods of time.