So Australian Survivor really is Australian Survivor in a very literal sense this year. The upcoming Brains v Brawn season underwent a dramatic location shift from its usual tropical Fiji spot to a much more dusty-looking site in outback Queensland. But how exactly does that change the world’s greatest game of human chess, and will the harsh-looking surroundings translate to a more physically brutal season? The short answer to that is: “Heaps,” and “yes.”

This year’s series was filmed up in Cloncurry, Queensland; a town with a population of around 2,800 that lies around 120km east of Mount Isa.

To give you some idea of exactly how in the middle of nowhere that is, here’s where Cloncurry is on a map. 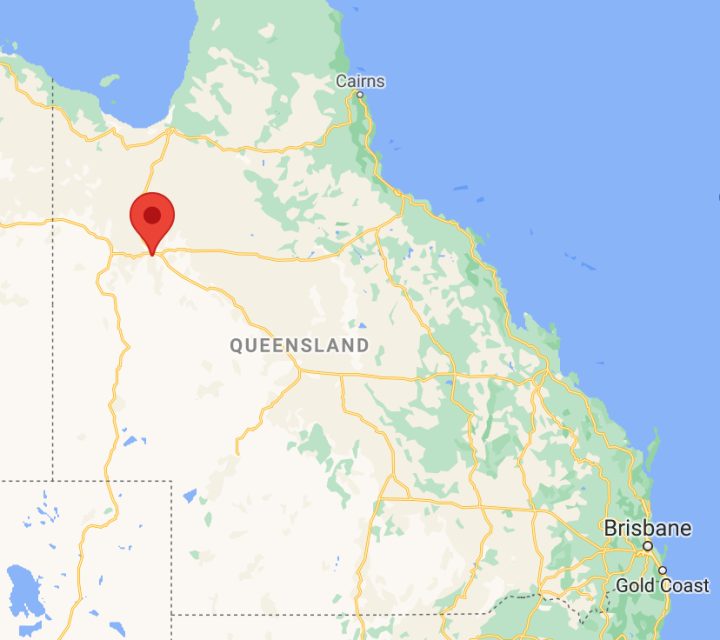 Getting there involves a fair hike. Two hours on a plane from Melbourne to Brisbane. Another two-and-a-half from Brisbane to Mount Isa. And then a tick under 90 minutes in a van from Isa to Cloncurry through the pitch black of night on winding rural highways. The drive itself may have taken less time, but we took it slow in a bid to avoid “stuff on the road.” Like the 700-odd kg cow that appeared out of the dark like something out of Resident Evil and forced us to reef on the brakes hard while it casually ambled across the highway.

But saying that the show was filmed “in Cloncurry” is something of a misnomer.

While production based itself out of the small town, filming took place around 40 minutes off the proverbial beaten track, through vast cattle stations of barren, cracked country; a vista occasionally broken up by craggy red monoliths that shoot skyward like piles of ham set solid by the burning sun.

To say that conditions are unforgiving is an understatement. The days are hot and unrelenting; the temperature consistently nudging the mid 30s. The day we visit set it’s 32 out. I’m told this means it’s “starting to cool off.”

In the world’s toughest game – can the Brains outwit their competition? #SurvivorAU Brains V Brawn starts 18 July on 10 and 10 play on demand pic.twitter.com/6RtuMsIYWr

It’s windy, and it’s dusty. The ubiquitous red dirt gets everywhere fast. Survivor does not make physical oil paintings out of its contestants, but even by those standards the cast as we see them looks beat to shit. And by the time we’ve laid eyes on them they’ve already been cleaned up for TV, so the story goes.

The nights are worse. Cold, still, single digit temperatures. No relief to be had there. It sucks.

When we arrive on set we’re on day 26. There’s still 24 days to go. They’re barely past the halfway mark and the cast that has made it that far looks absolutely ragged.

From a distance, we get to watch the cast participate in a reward challenge. What’ll likely wind up filling around 7 minutes of screen time in reality lasted well over half an hour. Without giving too much away, it involved a repetitive, physically demanding motion. A group of ragged people who had been outside at that point for a month hewing away in the burning sun. Brutal. Relentless. Fucked.

But the problem in running Survivor in these conditions as opposed to Fiji isn’t necessarily in the physical challenges, it’s in the idle resources.

Will Brawn be able to outplay the Brains in our toughest season yet #SurvivorAU Brains V Brawn starts 18 July on 10 and 10 play on demand pic.twitter.com/JxA15sSnEB

There’s no coconuts growing in outback Queensland. No papaya trees dotting the camp surrounds. There’s dust, there’s dirt, and there’s not much else. Gone are the fish and occasional wild chickens that Survivor in Fiji provides. Instead, the cast has wild camels and buffalo and snakes to contend with. The latter of which is gamely kept at bay by a mythical on-staff wrangler named Larry, who the crew refers to with the kind of reverence usually reserved for rock stars.

Even a body of water is a rare commodity this season. There’s no rising tide to jump into after a dusty Immunity Challenge, and there’s certainly no spear fishing to idly pass the time. I’m told by crew that some tribe members have managed to catch a yabbie or two in a river system that’s seen more fruitful days, and that they occasionally have access to the nearby Corella Dam for water-based challenges. ‘Course that also happens to be inhabited by freshwater crocodiles, so there’s that added degree of difficulty just for good measure.

This is no ordinary Survivor. This is as rough and as unforgiving as it gets. The few hours I spent on-set were relatively hard enough. Absolutely beyond stuffed if I know how anyone, in their right mind, will be able to manage 50 days out there.

But oh boy am I fired up to find out.

The author of this article travelled to Cloncurry as a guest of Network Ten.