If you didn’t break into a million tiny pieces like a fragile piece of china hitting the concrete during last night’s episode of The Bachelorette then you, my friend, are made of stone.

While Angie Kent was visibly upset when she gave Timm Hanley her verdict, she was even more upset watching the episode from the perspective of a viewer last night.

“Obviously I didn’t see [in person] him walk off and put his hands in his face and sit down and say, ‘This is why you don’t open up.’ That really hurt me, I didn’t know that happened,” she told me when I spoke to her and Carlin this morning.

“But the way he handled it is just Timm. He hates seeing me cry so he was there to protect me which was really beautiful.”

She added, “Timm is emotional in his own way, he speaks poetically and in riddles. He expresses himself through his body language more so than crying.” 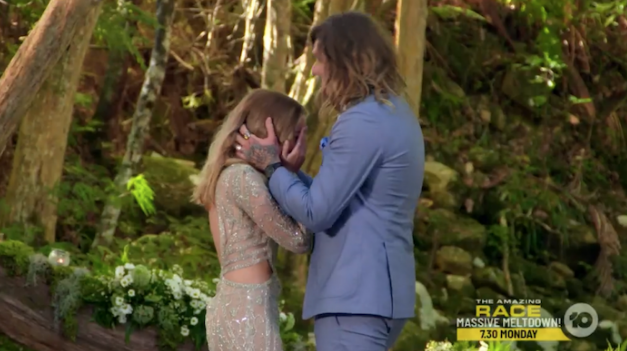 She also doubled down on calling Timm her soul mate, which she still totally stands by.

“In life, you have plenty of soul mates. Yvie’s one of my soul mates, I have three friends who are my complete soul mates, Timm, I felt like, was a soul mate of mine.

Even though he was insane, he kept me sane. He was my soul mate but Carlin has my heart. People have been a big wiggy about the term ‘soul mates’ but it comes in all forms. So I’m gonna stick to it, for sure.”

She also revealed that both she and Carlin have spoken to Timm since the finale wrapped and ya boi’s doing a-okay.

As the saying goes, all’s well that ends well.