Gemini queen Abbie Chatfield has called out her Bachelor In Paradise co-stars Cassandra Mamone and Mary Viturino for their mean girl behaviour after hidden footage showed them talking smack about her.

In the footage, Mary said: “Abbie is trying her hardest to get all the camera time.” Cassandra added, “She’s getting into the pool in her bikini. She’s not the most important person here.”

Abbie, who was the first person to leave Paradise, took to Instagram to call them out for “bullying” and “slut-shaming” her on the show.

“Here we have the bullying and the slut-shaming regarding me wearing a bikini in Paradise,” she said in a video response.

“Despite the fact that everyone else is wearing a bikini, but it’s an issue because it’s me.” 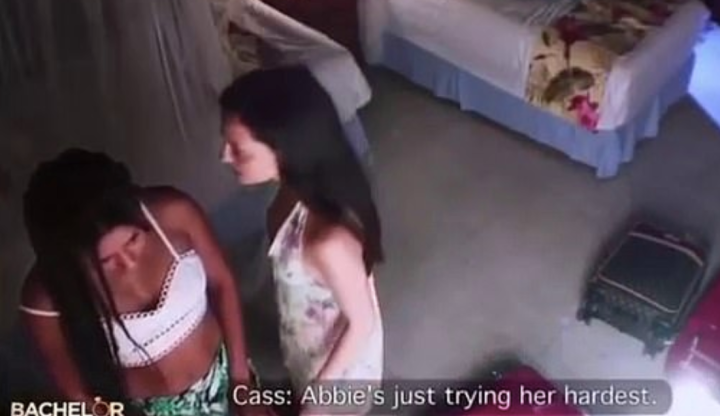 The gals in the lost footage. (Credit: Bachelor In Paradise)

Abbie pointed out that no one was saying she did anything “mean or rude”, and that it was simply wearing a swimsuit that set the girls off.

She went on to reveal that she received death threats from viewers during her time on Bachie.

“I got death threats, I got my heart broken and I had to deal with [bullying] in the mansion for three months,” she said tearfully.

Abbie admitted she felt “validated” that viewers could finally see what really happened behind the scenes of the show.

“I feel so validated you guys get to see what I said happened in the mansion,” she said.

Check out both the footage of the girls mouthing off, plus Abbie’s response below:

Abbie's response to the 'exclusive unaired clip' of Mary and Cass bitching about her that Channel 10 posted online today. What she says is valid. And also, In the nicest possible way, why would they even post this at all? She's been off the show almost a week now. There's new people in there and new storylines now. It's kinda like Ch10 are just stirring up people against her ???? #bachelorinparadiseau