I Went On Uber’s Rideshare Sub And, Yes, The Rumours Are True: Submarines Rule

Here’s a fun thing about Heron Island: It is a sand cay, not an island, and the birds after which it is named are, in fact, egrets, not herons. Believe it or not, as tremendously fun as that thing is, it is currently not the most fun thing about the egret-filled sand cay in the southern Great Barrier Reef known as Heron Island. Right now, it is where Uber and Tourism and Events Queensland are together operating scUber, the Uber service for getting into a goddamn submarine.

It works like this: You wake up in beautiful Gladstone, Queensland, you slam an enormous button in the Uber app that says ‘Yes please!’ (not quite), you climb into a sleek Tesla, you fork out 3,000 big ones, and you and a person that you clearly really, really like are picked up in a helicopter and flown to Heron Island. Once on the island, you get on a boat to be taken out to be a bigger boat, and from that boat you disembark onto — and I cannot stress this enough — a goddamn submarine.

There are lots of cool things about the scUber rides. There’s the money that’s being donated to the conservation group Citizens of the Great Barrier Reef — $100,000 plus the “equivalent value” of every scUber ride that is taken. There’s the fact that the submarine itself is constantly collecting data on every dive, to be made available for research purposes. There’s the fact that, yes, every helicopter flight ferrying scUber passengers to and from the launch point is being carbon offset. Great stuff, I think we can all agree, but the most important thing here is that I personally got to go on one.

Because I’m one of those smug bastards from the media that you hear so much about, I managed to skip two of the major portions of the scUber experience — I did not get a Tesla ride to the helicopter (I was already at the airport) and I did not pay $3000 (I do not have $3000) — but the rest of it was pretty much what anyone doing it the proper way would get.

Here’s the thing about being in a helicopter: It’s insanely fucking cool. I had always suspected that this was the case, but it was delightful to have it confirmed. You turn up, they weigh you, they weigh your bags, and then all of a sudden a lovely gentleman named Paul takes you up in a lovely red helicopter and you spend a good 30 minutes with your mouth very embarrassingly agape as you fly over coral reefs that are so beautiful from the air that you get the irrational urge to put the Mona Lisa through a paper shredder. I assume this experience is universal. 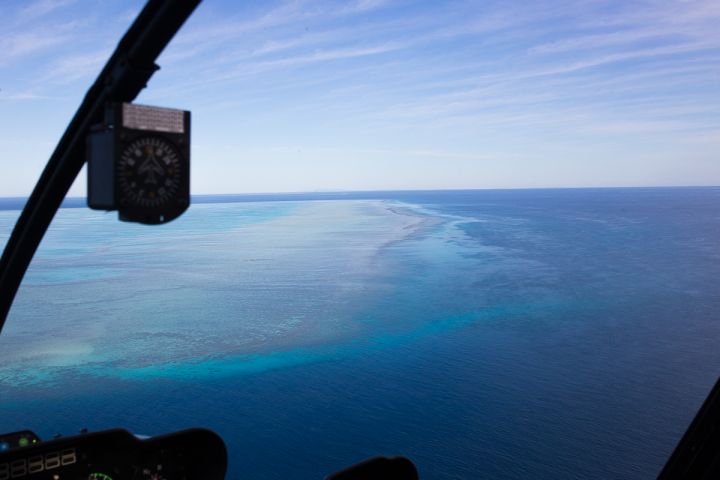 From the air, Heron Island doesn’t appear to be very big. This is because it is not. It is a bit less than a kilometre long and a bit under a third of a kilometre wide. This area is occupied by a resort, a research station, and a lot of birds. Like, a lot of birds. Almost certainly more birds than you are picturing. 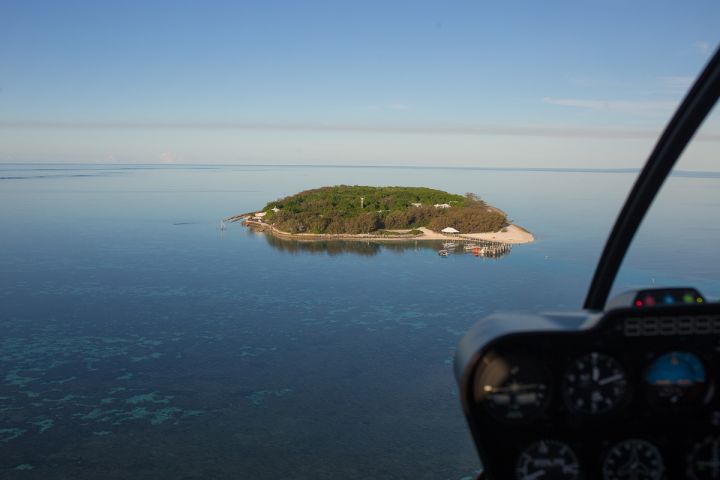 Pictured: Heron Island. Not pictured: A lot of birds.

Weather permitting, you will not be on the island for long before you are whisked off to the Pacific Conquest, a 30-metre ship that is currently acting as the home base for Aquatica Submarines, a Vancouver-based company who own and operate the scUber submarine.

Arriving on the Pacific Conquest, you are greeted by the crew, weighed (again), given a safety briefing, and, if you’re lucky, also given a free pair of promotional sunglasses for Aquatica Submarines. Standing around on deck before the dive, I had a chance to talk to some of the sub crew, including a submarine pilot roughly the same age as me who made me deeply depressed about my own life choices by comparison, and a submarine pilot-in-training and underwater photographer substantially younger than me, who made me proportionately even more depressed about my life choices. You may not have this exact same experience. 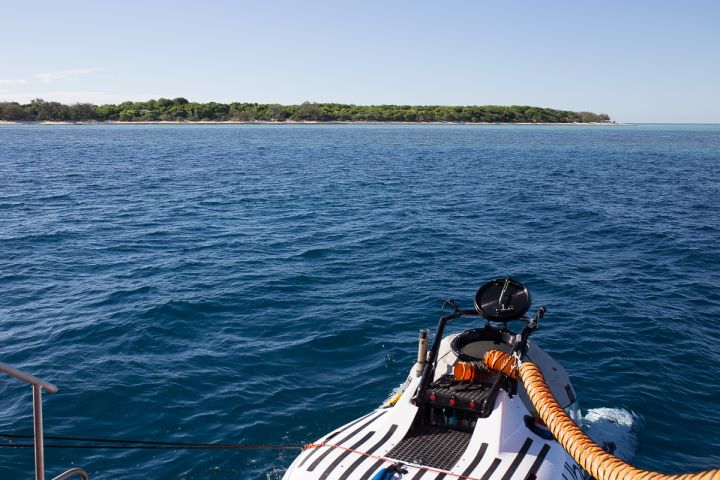 Pictured: I like to think the tube contains delicious Submarine Chow, for the submarine.

Before you know it, you are monkey-gripped onto the back of the waiting submarine and guided through a small opening on the top. The interior consists of two seats at each side of the sub, and a middle seat for the pilot who — no joke — controls the submarine (except for the ballast controls) from an off-brand PS4 controller. 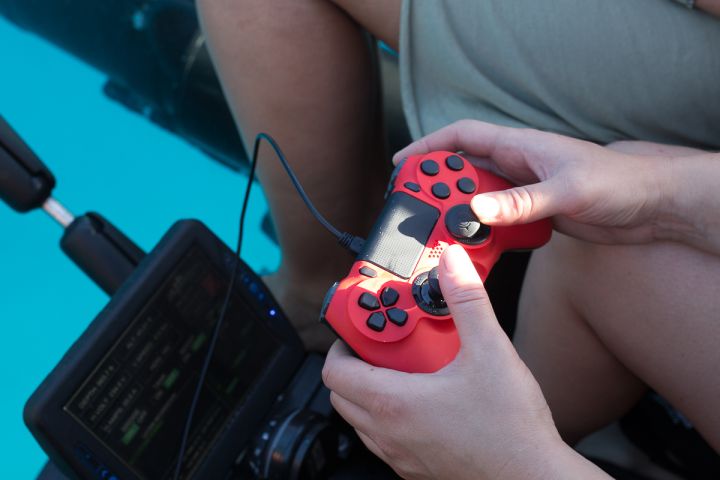 Pictured: I cropped my feet out of this, so uh, sorry / you’re welcome, depending on who you are.

The part of the submarine in which you sit is a clear acrylic dome which is, well, not necessarily the volume of personal space you would normally give to three people. You can maybe guess this from the image below, in which our knees are turned sharply inwards so we can sit comfortably and my hat is turned sharply backwards so that I could move my head. A coward would suggest that I could have just not worn a hat. 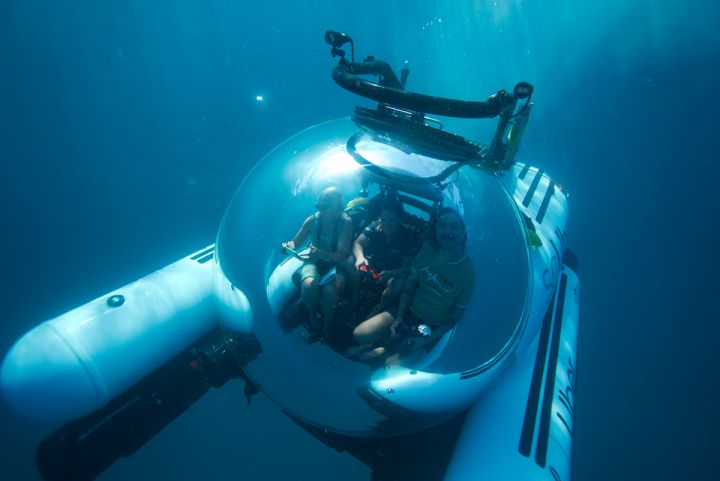 Photo: Note the other passenger, who is actually documenting stuff with a camera and notepad, like a proper journalist would.

The submarine is entirely electric and would be stunningly quiet if it weren’t for the fact that three people in a confined, insulated space make things very hot, very quick and, as a result, the AC in that bad boy is absolutely pumping. The noise does not detract too much from the experience though, because you are in a goddamn submarine.

Once the ship disappears from view and you are entirely submerged, everything immediately feels surreal. We’ve all of us been underwater before but it’s never particularly easy to be there. You’re either holding your breath or breathing through some sort of obstructive mechanical device — you never get a chance to just hang out and chat while you are zipping around underneath the waves. Perversely, being in a submarine makes you almost feel more a part of the natural world around you, because you are not struggling to survive in it.

The roughly 40 minutes we spent in the sub (real, bonafide scUber passengers will get an hour) was spent doing a leisurely waft past and over sections of coral reef and a colourful array of fish, while our pilot, Erika, talked about being a submarine pilot as if it wasn’t all that big of a deal and not, say, the coolest thing in the world. 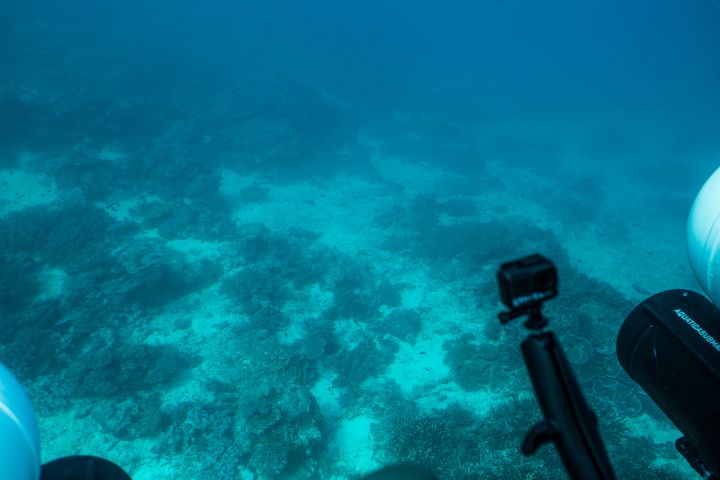 Pictured: Apparently you can just ‘get’ in a ‘submarine’ and ‘go’ ‘underwater’??? 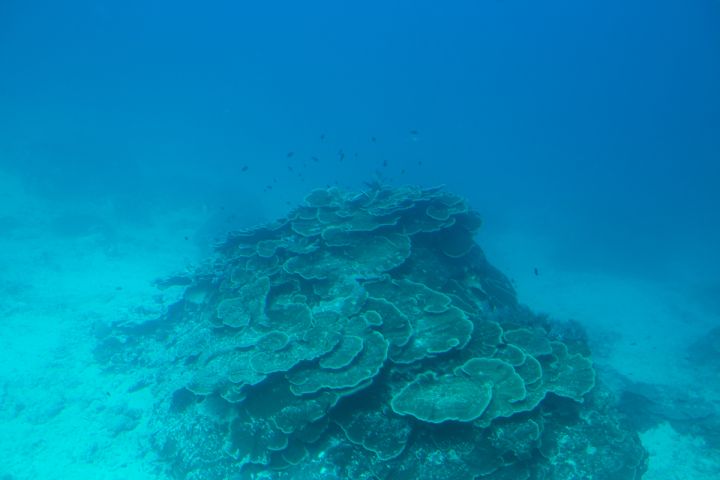 Pictured: Being underwater is dope.

Eventually, your time will be up, and you will return to the surface, popping a little bit up out of the water exactly like every single submarine in every movie does.

After that, it’s back to Heron Island, then back to the Paul* and his helicopter, then back to wherever you caught the initial Uber from, and then, presumably, back to your regular, submarine-less life.

All in all? Submarines are extremely cool, and I highly advocate going on one, if you are in a position where you can afford to.

The whole exercise is part of a larger push to demonstrate that — while threatened — the reef is indeed still there, still beautiful, and not beyond the point of saving, with tourism playing a large part in funding the research that could theoretically help us save it.

The scUber program will run until June 18th, moving up to Port Douglas on the 9th, where it will be available to Uber users located in Port Douglas, Cairns, and Palm Cove.