Photographers Pull Out Of Vivid Exhibition Over Accusations Of Government Censorship

Local and international photojournalists from prestigious agencies including Magnum and Contact have withdrawn their work in protest from a large-scale outdoor exhibition held as part of Sydney’s Vivid festival following the censorship of images submitted by 18 of the 35 photographers deemed “threatening to families” by event sponsor Destination NSW.

The ABC are reporting that South African photographer Jodi Beiber in particular has withdrawn her body of work after one image of bare-breasted women was removed in the hours prior to last night’s opening, an incident she’s describing as “a huge censorship.”

Vivid organisers, including creative director Ignatius Jones, have countered Beiber’s claims by insisting that certain images are inappropriate for screening in a public place “according to the laws and bylaws in New South Wales regarding what can be shown in a public precinct, a public park with fully unrestricted public access.”

Some of the images deemed “too distressing” which have been removed include photographs of dead children, the Granville train accident, the Cronulla riots and a photo essay of thirty images depicting the aftermath of bushfire ravaged landscapes; the latter a series by Semi-Permanent presenter and Oculi photojournalist Andrew Quilty. 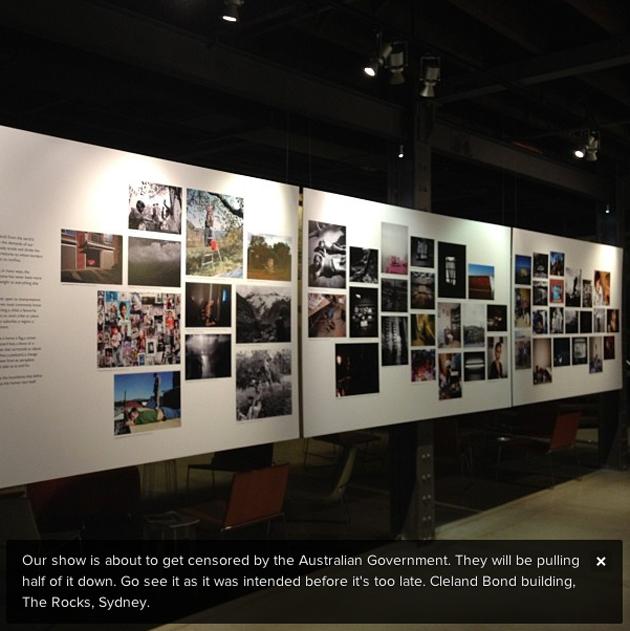 Reportage festival curator Stephen Dupont has labelled the move “embarrassing” in front of visiting international photographers – a sentiment also echoed by Quilty, who told the Sydney Morning Herald in regard to his landscape photographs, “[Destination NSW] is an organisation that is trying to sell their product, which is NSW. They have an idea on how they want it depicted [and are] denying the public one person’s interpretation of that.”

Destination NSW chief executive officer Sandra Chipchase maintains that “There is a time and a place [for those photographs]. We just don’t want violence, dead people or anything that could distress people. In that public domain area it’s about entertainment and engagement.”

Photo essays in their entirety are being shown at other indoor exhibits.

Meanwhile, pretty sure those are silhouetted naked ladies on the Opera House.