A Sydney model who picked up a Golden Staph infection from dirty makeup brushes is speaking out to raise awareness of hygiene practises in the makeup artistry industry.


Anthea Page, who has covered magazines from Harper’s Bazaar to Cosmopolitan Bride, contracted the highly contagious and potentially deadly infection after doing a show for Fashion Weekend at Sydney’s Moore Park last weekend.

She was put on strong antibiotics, narrowly avoided a trip to the hospital, and was forced to cancel or reschedule her bookings for the next month.

Now she’s speaking up about unhygienic practises in the industry, which she says are rife but almost never talked about.

“I believe in authenticity and although I was ashamed to share this with the world I felt the issue was so widespread that I had to at least say something,” she told PEDESTRIAN.TV.

“Every model has a story about pink eye, staph, school sores, etc, but if your face was your job would you want to publicise your issues and draw attention to the parts of you that are fucked? This happens ALL the time but the only other girl I’ve ever seen say anything about it is [Hungarian model and actress] Barbara Palvin.”

Anthea posted a photo of her infected eye to Instagram and Facebook, asking everyone – whether or not they’re in the industry – to look out for their own safety and demand more hygienic practises. 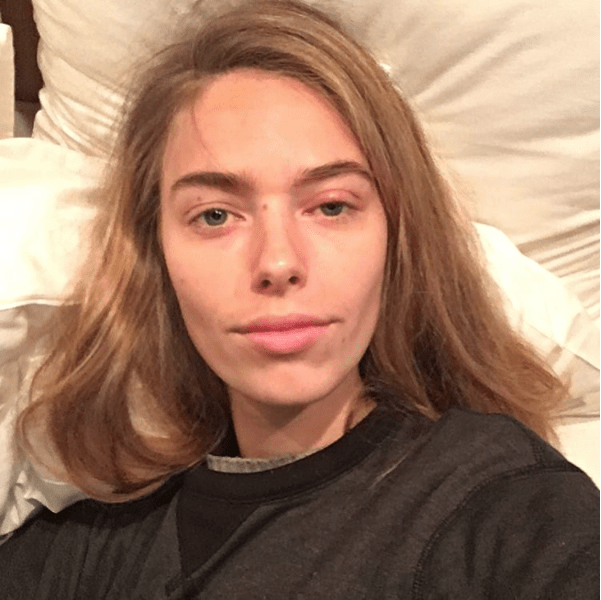 “If you are getting your makeup done or using any testers, check everything has been cleaned to your standard even if someone scoffs at your concerns,” she told her 87k followers.

“This is not my first time receiving an ailment from a dirty makeup brush and unfortunately in my line of work I doubt it will be the last but please be aware of this if you ever come close to a makeup kit so you can keep yourself safe and healthy.”

Golden Staph is a particularly nasty and fucked infection that occurs when the the Staphyloccus bacteria gets inside the body.

It can lead to anything from boils to blood poisoning, and in Anthea’s case, posed a very real threat of blindness (thankfully the danger has now passed).

After Anthea shared her post, dozens of people came forward both publicly and privately with their own horror stories.

“The most shocking to me was the young girl who had her makeup done for her 21st birthday party,” Anthea told P.TV. “She contracted a recurring staph infection that has changed the last 9 years for her (it appears all over her body). The emotional / physical damage has had such a profound impact on her that she has never had a partner since or told anyone about it until my post.”

Sandra Campitelli, CEO of the Hair & Beauty Industry Association (HBIA), told P.TV that while they recommend makeup artists follow their state’s health regulations, the industry can’t mandate it as such.

“Obviously the industry strongly recommends that artists follow the health regulations pertaining to their industry,” she said, but explained that artists can run into difficulties when working with multiple models.

“They’ll be doing one after the other, and so they may not necessarily be able to [clean rigorously between each one].”

Campitelli recommends artists use plenty of different brushes, but added that it was likely many don’t due to the cost.

She echoed Anthea’s suggestion in that people be prepared to ask artists how clean there equipment is, and not be afraid to do so.

She also warned that other models might have picked up the same infection as Anthea.

“And if that was the case, it should be investigated.”

A letter to makeup artists and those getting their makeup done… I’m not going to sit here pretending I don’t like modelling or isn’t awesome because it really is and I do almost always have fun on jobs. Models have it good most of the time, especially in Australia however there are health/hygiene risks involved for models and anyone using testers or getting their makeup done people can overlook. I have just been on a fashion show job for the past 4 days and unfortunately even though I had observed unhygienic practises and confronted the qualified artists (who I will not name) I still ended up taking home a nasty eye infection from fashion weekend. I do feel my safety concerns were dismissed as if it was part of my job to put up with these unhealthy conditions. My message is not intended to critique the women who I trusted with my eye and skin health but to raise awareness of importance of hygiene practises amongst artists. If you are getting your makeup done or using any testers, check everything has been cleaned to your standard even if someone scoffs at your concerns. This is not my first time receiving an ailment from a dirty makeup brush and unfortunately in my line of work I doubt it will be the last but please be aware of this if you ever come close to a makeup kit so you can keep yourself safe and healthy. ?? Ps – It been diagnosed as a staff infection by the doctor and I’m now on medication ???? #unretouched #nofilter #fuckingsick