The FIFA World Cup final is roaring towards us this weekend, and over in Moscow final preparations are well underway, including this morning’s announcement of the game’s referee: Néstor Pitana.

At the last World Cup in 2014, Pitana also handily managed high-profile matches, including the France vs Germany quarter final matchup.

He also happens to be a very Bigg Bboy™.

Pitana, a 43-year-old Argentinian, stands at 6’4″ tall and has guns for fucking days.

The lad often dwarfs most of the players for sheer size, squeezing his seemingly very impressive rig into the FIFA-ordained ref shirts throughout the tournament.

Referee Néstor Pitana is 6’ 4” and has some guns. Seems like the players aren’t as eager to get in the ref’s face when he’s bigger than them. Howard Webb was the same. Didn’t take any BS but let the players speak their mind, albeit at arm’s length. pic.twitter.com/ozOuqcmpWQ

Nestor Pitana of Argentina will take charge of Sunday's World Cup final.France take on Croatia in the showpiece final this weekend following their semi-final victories over Belgium and England. pic.twitter.com/VqL5UfhAAY

Look at the sheer heft of the boy. Hell’s bells.

Fans have praised Pitana continually for his no-nonsense approach to officiating games and for his ability to take no shit from players, which is relatively easy to do when you’re the size of a house and look like you’re a member of Rammstein.

Pitana becomes the second Argentinian to officiate a World Cup Final after Horatio Elozondo oversaw the 2006 final, and he certainly becomes the largest, heaving unit to control the globe’s biggest sporting event.

Here he is calling for the VAR looking like he’s about to haul down the big screen from the stands to watch the replay himself. 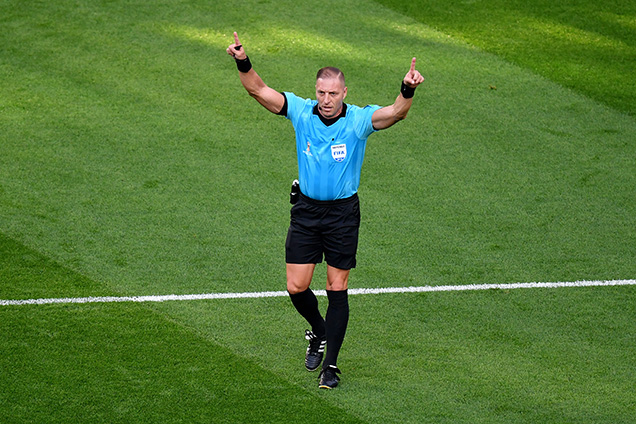 No matter who manages to emerge from the game Sunday night victorious – be it France or Croatia – one thing will remain true: We are all in absolute awe at the size of this lad.