The majority of athletes at the games are career professionals who have mastered the fine art of thumbing their nose at the Grim Reaper; the IOC rewarding this abhorrent behaviour by giving medals of precious metal to those who come closest to the great beyond without actually crossing over.

However, it is not medically advisable for me, an overweight 32-year-old man with rudimentary athletic abilities who has seen snow a grand total of four times in his life, to attempt any of the sports on offer in the Winter Olympics.

Some I may gamely struggle through, others I may fail at immediately. But no matter what, the end result for any attempt that I, a Pudding Man, make at a Winter Olympic sport remains the same: Death. Horrible, horrible death.

How quickly would it occur? It all depends on the sport. Observe this highly scientific ranking: 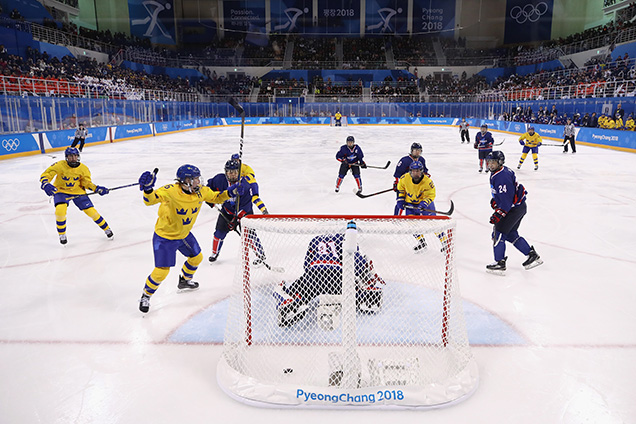 On paper, a brutal sport capable of cross-checking me off the mortal coil in record time. But in practice, no national hockey coach in their right mind would send me out onto the ice in such a team sport-environment. I would be wrapped in cotton wool and left on the bench, tasked with upholding team morale, safe from all danger except that of a rogue, flying puck. 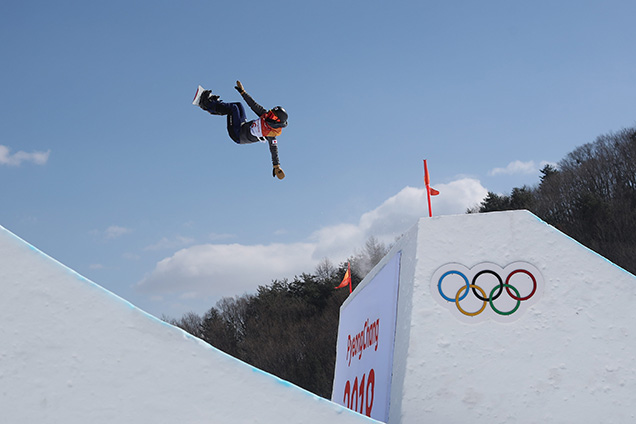 You, a dumb idiot, might perish quickly while attempting any of the myriad of snowboarding events after strapping the board to your feet. But me, a brain genius, knows that life can be sustained for practically indefinite periods of time by affixing the board to mine own ass and tobogganing past the Spectre of Death, flipping it off and making it furious at my clever deceit.

Swiftness of Death: Indeterminate, but likely due to ass frostbite. 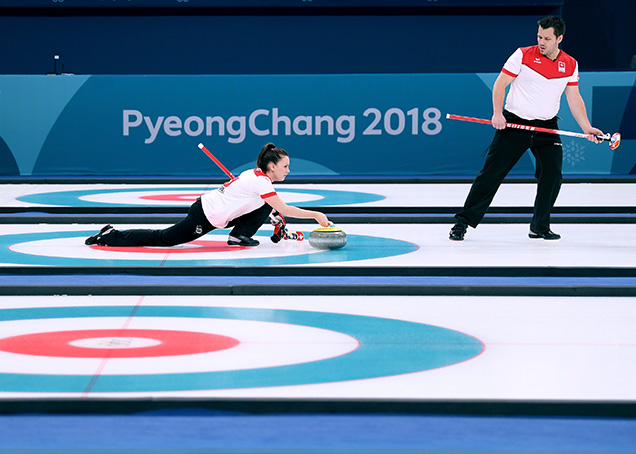 The most placid of Winter Olympic sports? On paper, perhaps. But piss off just one Swedish 50-year-old with some ill-timed trash talk and suddenly those 20kg stones become hurtling, ankle-high missiles capable of causing horrific injuries to the lower leg.

Swiftness of Death: Totally dependent on the Korean medical system. 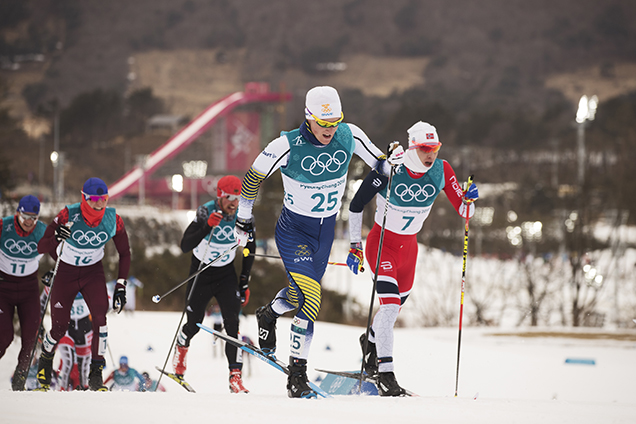 A baffling sport for morons that abandons all the recreational elements of skiing and retains only its elements of torture. A competition that only serves to answer the question “what’s that over there?” For me, a terribly slow and demise is sure to arrive either by frostbite or boredom, leaving a frozen corpse with an incredulous look like I’m Jack Nicholson at the end of The Shining.

Swiftness of Death: Too long to ever justify anyone watching it.

I don’t even know what the christ this is supposed to be, but given the presence of the word “Nordic” I can only assume Vikings are somehow involved.

Swiftness of Death: Three months, after the pillaging fleets land and all local resistance has succumbed to their mighty chests. 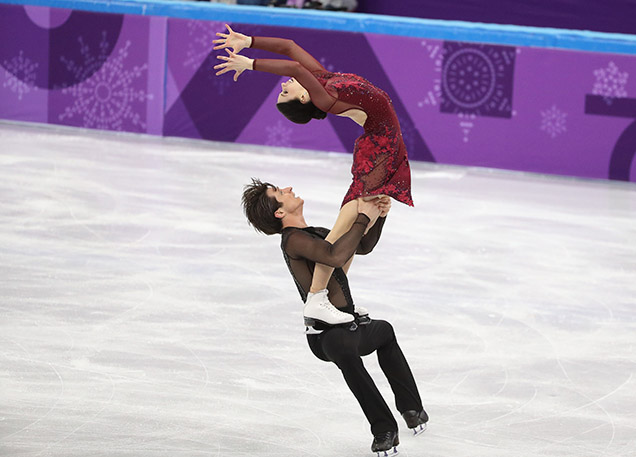 Forget the fact that allowing the cast of Disney On Ice to compete for Olympic Gold is baffling enough as is, the real death-danger in attempting this sport clearly comes from being bashed senseless by the deranged partner of a bitter rival, as is figure skating tradition.

Swiftness of Death: 119 minutes, same as the running time of I, Tonya. 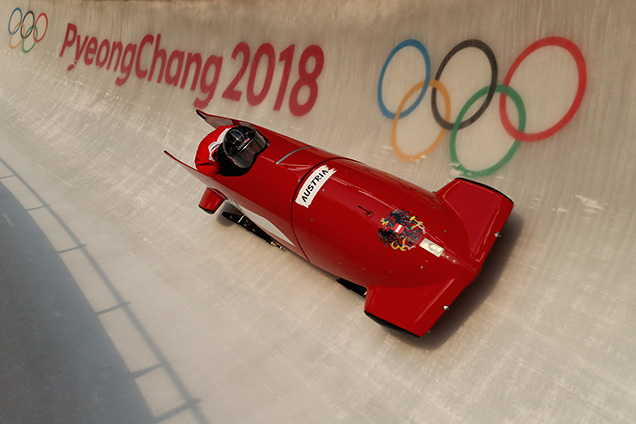 Provided I do not have to either steer or man the brakes, the Bobsled is theoretically one of the safer Winter Olympic sports for me to attempt. A menacing sport on paper that in reality famously failed to murder a team from Jamaica, the nation geographically furthest from snow on the planet.

Swiftness of Death: Somewhere around the Olympic record 4-man time set at the 1988 Calgary Games. 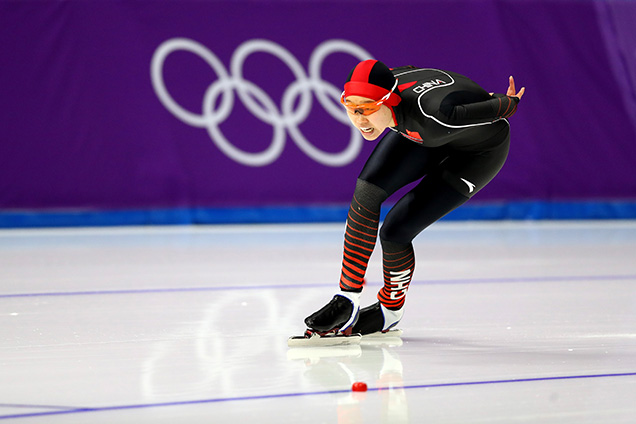 It’s good that a sport exists where actual humans race while wearing what are essentially knife shoes. It’s a great thing, actually. Completely normal. The long-form events are marginally less fraught than their short-track cousins, but the blades on the shoes are longer and that is a recipe for a terrible time unless you’re trying to julienne a vat of carrots like a dickhead.

Swiftness of Death: Quick and tasty. 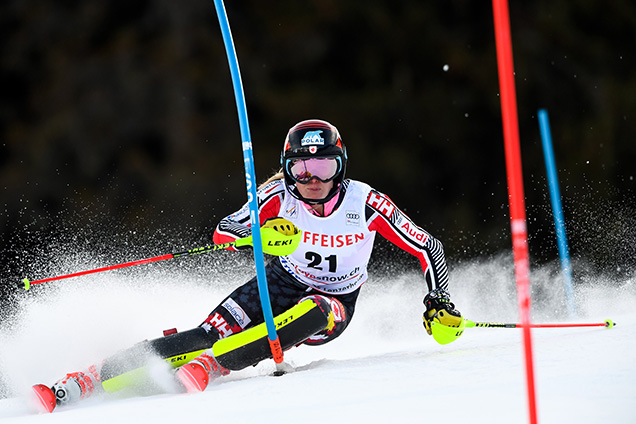 There’s the weird sports of the Winter Olympics, and then there’s slalom: An event in which human beings fling themselves down a steep hill in order to see who can endure a large amount of blunt-force trauma the fastest. While professionals have trained themselves to shatter their shins on these foolishly placed poles, I will no doubt take the majority directly to the face. 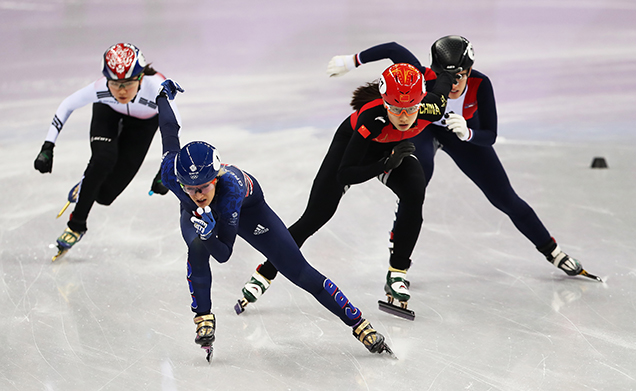 Steven Bradbury‘s miracle race and the event that combines the fundamental concept of long-track speed skating with the lawless confines of Battle Royale. In a sport where the winner is apparently the last one alive, I do not like my chances of survival.

Swiftness of Death: Enough time for the field to fully lap me, cutting me to ribbons in a flurry of blades like a common office shredder. 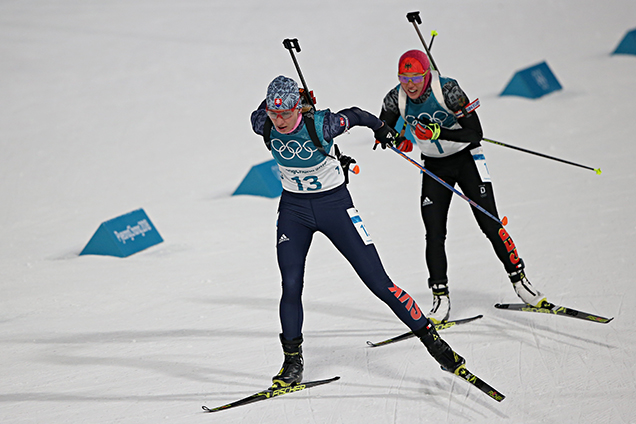 What if a marathon, but also guns? That there’s not a land version of long-distance running where athletes are allowed to wildly wield pistols seems both grossly unfair and a missed opportunity. Texas alone would have a participation rate through the roof.

Swiftness of Death: Two minutes, after looking at a trigger-happy Austrian nutcase “funny”. 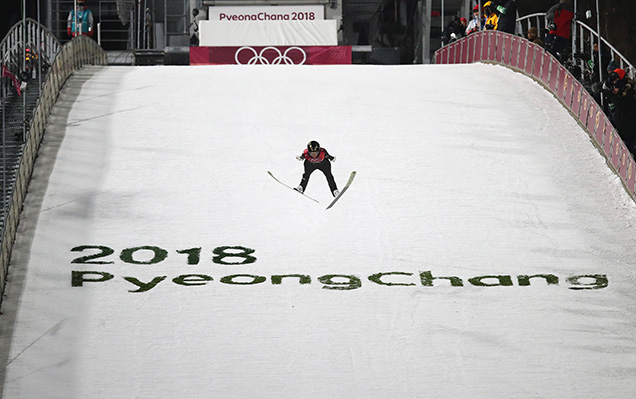 Whether its compacting myself into a cube upon landing or having the flesh stripped from bone after attaining terminal velocity, death is a guarantee for any spud like me stupid enough to give it a crack. But there’s no denying that the glorious and insanely long amount of time spent hoisted into mid-air would be soul-affirming. 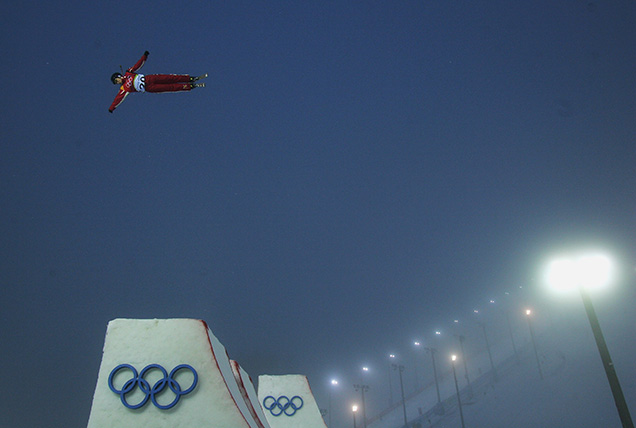 A more effective method of dumping human beings directly onto their scones from a great height, mankind is yet to invent. Truly, the Piledriver of sports.

Swiftness of Death: Wildly fast and with an unnecessary degree of difficulty. 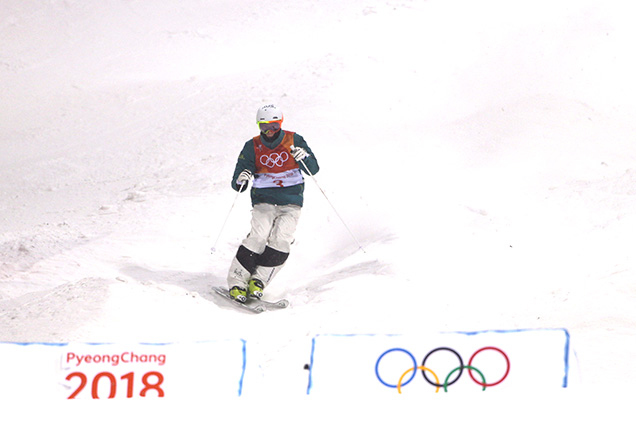 Forget the wild jumps here, I, a man who makes involuntary noises when standing up off the couch, would not last much beyond the start of this ACL-destroying shitstorm; utterly done in after the first mogul drives my own knee halfway through my own face.

Swiftness of Death: An Olympic Record. 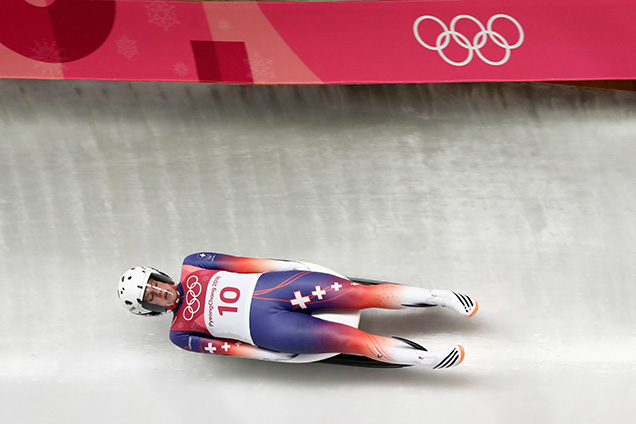 That this is considered a sport at all is insane to me, what the living fuck. Sure, we’ve all slid down some stairs on an esky lid before. But the luge is what happens when that insane kid who burned his hair off after chucking a deodorant can in a bonfire moves to Whistler and trades in bongs for nose beers. A human harvester.

Swiftness of Death: Less than it takes to get to the first chorus of The Goo Goo Dolls‘ 1998 hit ‘Slide‘. 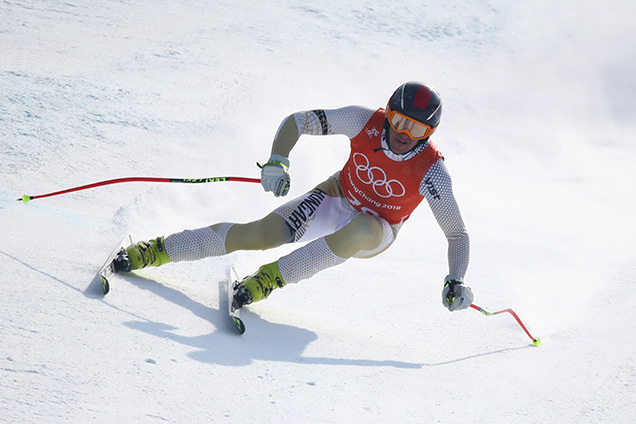 The human body was not meant to travel at 100km/h+ while wearing less spandex than a Melbourne City Wrestling show. A very efficient method of turning my fleshy remains into a human cannonball capable of punching a comical hole in a ski chalet at the bottom of the run while a throng of emotionless Swiss watch on. Should be illegal.

Swiftness of Death: About three shakes of those annoying alpine cowbells. 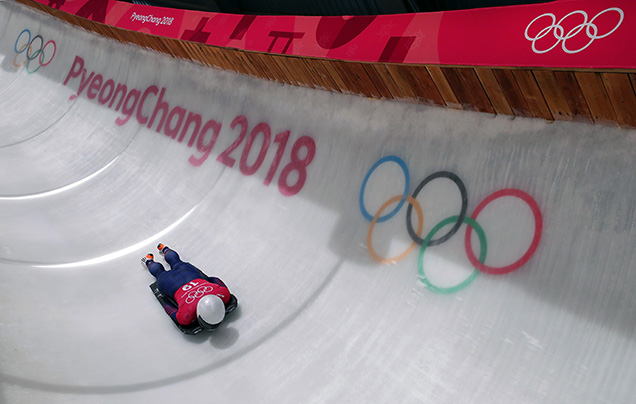 A sport named for what it turns you into. An idiot sport for the clinically insane and one that should be considered as an alternative to chemical execution. That luge kid who moved to Whistler and got heaps into nosé? This is his psycho mate who shelves meth.

Swiftness of Death: Literally the first corner. That’s it for me. Absolutely gone.