Please pour one out for Aussie tennis player John Millman who managed to experience one of the most unlucky injuries I can possibly imagine.

The injury occurred while Millman was playing in the Mexican Open against American Marcos Giron.

Millman swung his racquet behind him and somehow managed to rebound the ball right into his eye. As someone who can barely handle putting contacts in this looks so, so painful, I can’t even imagine.

My eyes are watering in empathy as I write this. John Millman ended up calling for a medical time-out and ultimately had to retire because he was hurt. He’s now out of the Mexican Open.

READ MORE
John Millman, Our Favourite Aussie Battler, Bows Out To Djokovic At US Open

Luckily, he seems to be doing okay health wise according to his Insta stories. We love to see a peace sign though that eye-patch bandaid is pretty fkn gnarly. 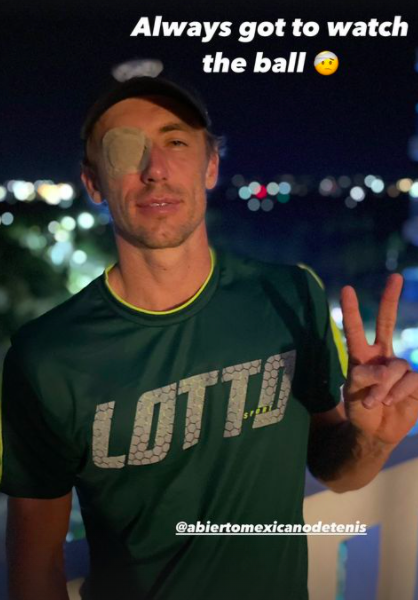 Sports journo Scott Reichel tweeted that it was “one of the weirdest injuries [he had] ever seen on a tennis court”.

I don’t watch tennis so I have no idea what sorts of hijinks they get up to on those big flat squares more commonly known as courts. But even I know this is a pretty wild, rogue injury.

Betrayed by the instrument you wield best … it’s both poetic and painful.

John Millman is a certified Aussie legend, having beaten Roger Federer at the US Open back in 2018.  Hopefully, his eye injury is minor enough that it won’t have lasting consequences.

I didn’t realise tennis was such a dangerous endeavour. In the words of RuPaul Charles “drag [and also tennis] is not a contact sport”.

But given both Ash Barty and Nick Kyrgios have had to pull out of major tournaments due to injuries, I’ve become convinced that tennis is scarier than rugby or footy.

Hard balls flying quickly at your face? Having to defend yourself with a bit of net on a stick? No thanks at all.