Just as he handles everything else thrown his way, Mick Fanning has confirmed the end of his marriage in the classiest way possible – with a tribute to his wife of 8 years.

Six weeks after the sudden death of his older brother, Peter, the Aussie surf legend took to Facebook to announce his split from designer wife Karissa Dalton, who he met through mutual friends back in ’04.

“I have nothing but love and respect for this woman. Karissa has stood by me since we first met in 2004. We have shared plenty of great times but more importantly she has helped me through some of the toughest moments in my life, especially this past year,” Mick wrote alongside a heaps cute pic of them.

“There has been some speculation about our marriage coming to an end over the past six months. We refuted those claims because we were both committed to working things out since we separated last February. After giving it our all though, late last year we made the tough mutual decision to move on separately.” 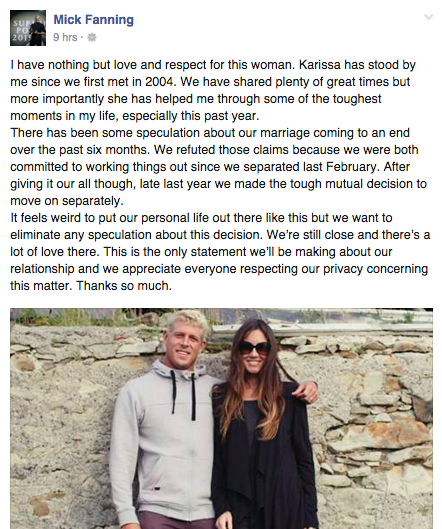