My friend Gabby (name has been changed, der) messaged our group chat this morning with bad news. Yet again, someone she had been on a few dates with that she tentatively thought might turn into something more had cancelled the whole thing because he “wasn’t ready for a relationship”.

“He said he wanted to be together and was intense about his feelings, but then BAM – today I get a “I just don’t think I’m ready” message,” she wrote, adding a screenshot of some of their previous conversation to prove to us that this wasn’t her being psychotic – the guy really was promising her the world. 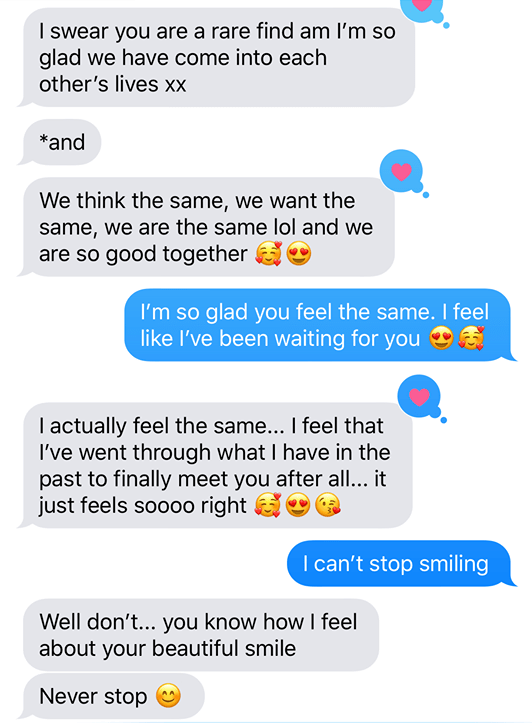 Say what you want about her responses – yes, Gabby falls hard and she’s saying some pretty major shit for someone who has been on a few dates with a guy. But she’s only giving as much as she’s getting – and what she’s getting here is a LOT of emotion, and every indication that the guy she’s been seeing is very, very invested.

Gabby didn’t have any other screenshots because she deleted their entire conversation in a rage (same tbh) but she recalled some of the other shit this guy had said to her.

“He’s just moved back from London and he was all “I feel I was directed back here to meet you”. He was all ‘everything has lead me to you/I can’t wait to see what the future holds’. He was telling me he wants us to get off dating apps and start building our future. Cos we are so the same and onto such a good thing together.”

“But then said it wasn’t that he didn’t mean everything he said and did,  but he is just in a weird sitcho and not ready when he thought he was. I was being o cautious because I’ve been burned before, but then he was always there and calling me and stuff, so I started to believe he was genuine.”

Anyone who has been dating in the last few years will know this type of story well. These days it feels like everyone you meet who has been single at any point since 2016 has a story of a guy or a girl who was all in, only to be all out in record time.

For weeks they’re overflowing with compliments, promises about the future and reassurance that their feelings are genuine. They’re calling you every day, even when you’re like “whoa, this is a lot”. They’re sending presents to your work… only to fade out or bin it all with no warning after a month or so.

The excuse is always the same – “I’m not ready”. They tell you they meant everything they said, but they’re just not in a place to start anything serious.

The issue here isn’t to do with commitment, it’s to do with leading someone on. Anyone who read the exchange above would say these are the texts of a guy who is KEEN AS HELL on this one person. They’re texts that say “I’m invested in you, in this, don’t think I’m not serious because I am very, very serious.”

I don’t know if it’s because the people who do this shit aren’t self-aware – they’re not in tune with their own feelings and run ahead on the highs of first dates, texting all these heightened feelings before realising it was all just excitement and deep down, they don’t want to commit to anything.

Or maybe it’s that they frighten themselves with their own feelings – making things so intense with the stuff they say, that they ultimately run away from the intensity they themselves created.

Maybe it’s people who aren’t perceptive of how their words might be taken by others – but then, who in their right mind wouldn’t see that “it just feels soooo right” would be taken by someone to mean “I’m really interested in you and am telling you I’m ready for a relationship”?

Whatever the reason people do this shit, here’s a message from me, Gabby, and every other person who’s been duped with your texts – if you’re not ready for a relationship, don’t text people you’re dating with messages like these. Just be normal! Just say you had a nice date! Say you think that person is great! You don’t need to say “I feel like everything has led me to you” OK?

Save that for when you’re actually ready for a relationship, beb.