The wedding cereomy of Kirsty Albion and Kelly Mackenzie (now Albion) took place on January 3rd – almost a week shy of January 9th aka the first *official* day same-sex couples could get married Down Under.

Mrs & Mrs Albion were given special permission to wed without giving a month’s notice to Births, Deaths and Marriages, in addition to other couples who wed in late 2016, because of extenuating circumstances. 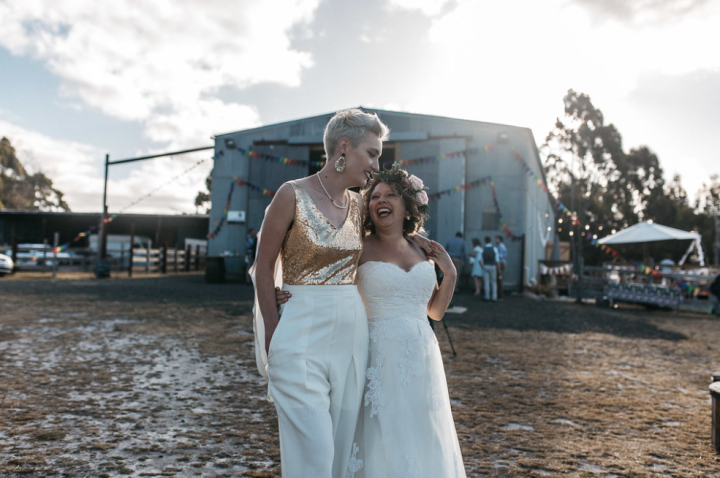 Along with the wedding having already been booked (at the chic-as-fuck Sandridge Estate in Tassie), they also had guests coming from overseas. Heartbreakingly, a bridesmaid and a best friend of Kirsty’s had a terminal pancreatic cancer diagnosis. She has since passed away.

Kirsty and Kelly were ‘uge campaigners during the SSM plebiscite debacle, and were engaged to be married (they both proposed at once, CUTE) well before the government announced their public vote plans on the human rights issue.

Their wedding date was already locked in for what would’ve been a “commitment ceremony”. Thank fucking god Australia collectively got their shit together (or 61.6% of those who voted, at least) to help make this special day for the Albions what it should’ve been all along.

“It was actually so incredibly special that it was legal,” Kelly told me.

“We were originally planning to go to New Zealand to do the paperwork there but half way through planning the wedding we were like, ‘Oh this could actually be a thing.’ On the day it felt so incredible to sign that certificate and be equal among our straight mates.“

Here’s the (very emotional) video footage which you absolutely have to watch:

The glitter on arrival.

“We did rehearsals in the lead up and friends from interstate taught themselves the dance from the videos posted,” wedding guest Kerri Buczynskyj explained. “It was incredible how many people got involved for Kirsty and Kelly.“

Kelly told P.TV it was the best day of her’s and Kirsty’s lives by far. This is why marriage equality is so dang important, mates. Congratulations you two. May love and fabulousness be forever in your favour.