The news that How To Lose A Guy In 10 Days is getting a 2019 reboot got me thinking – what would ruining a potential relationship with bad behaviour look like these days, in a world of dating apps and texting?

As someone who has been on/off single for the last few years, I’m well versed in the fear of fucking up dating etiquette. Whenever something that seems like it’s got potential goes to shit, I always blamed myself. I texted too much/double texted/whatever.

These days I’m more on the side of “fuck it, do you” because why change your personality for a date? No thanks. But some stuff *could* be getting in the way of you securing some IRL action, and you might not even know it. I’m not talking about who you are as a person, just some weird texting behaviour, you know?

I asked around the office and rounded up the stuff people noted as turn offs when texting a potential date. Then I let loose with this shit on some dudes I’d matched on dating apps. Don’t say I don’t put my head on the line for you guys.

I’m not really an emoji user myself, but I’ve seen the dating bios that seem to have one emoji per word. It IS a little odd when you overuse emojis – can it actually turn someone off, though? 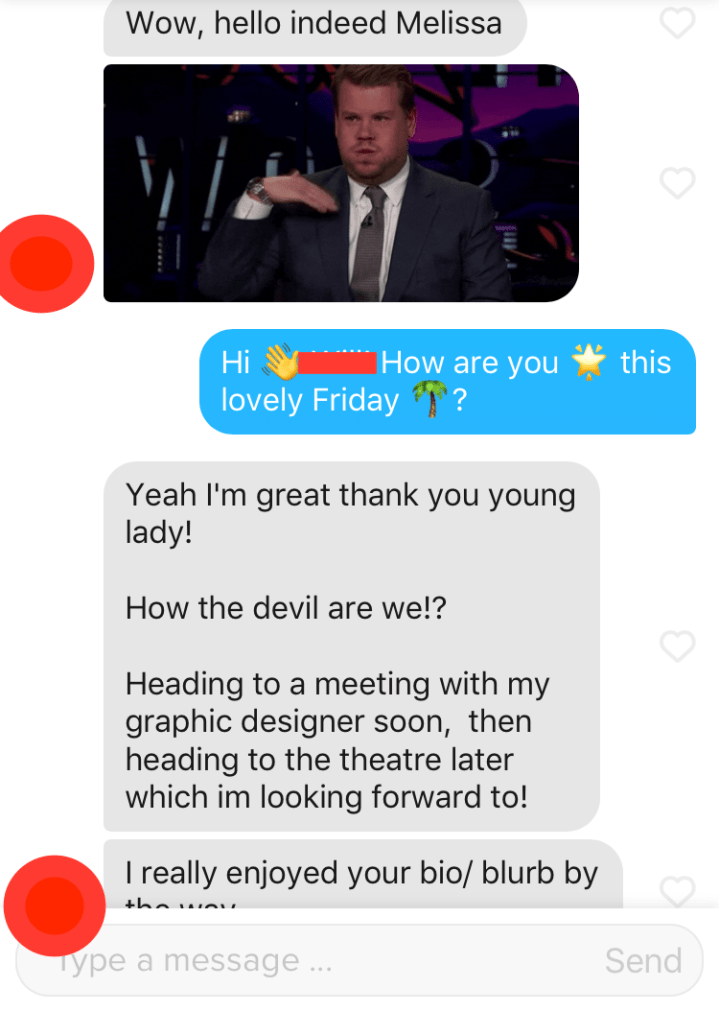 I gave it a go with a guy on one of my dating apps. When I say overuse of emojis, I mean A LOT of emojis. Not like, a nice smiley here or there.

My colleague Rachael was very specific about what turns her off dating-wise – inspirational quotes. Whether in your bio or mentioned in a convo, are inspo quotes in any capacity just wrong?

I tried it out with the same guy, while continuing with the heavy handed emoji use. Which, PS, were not proving to be a turn off. 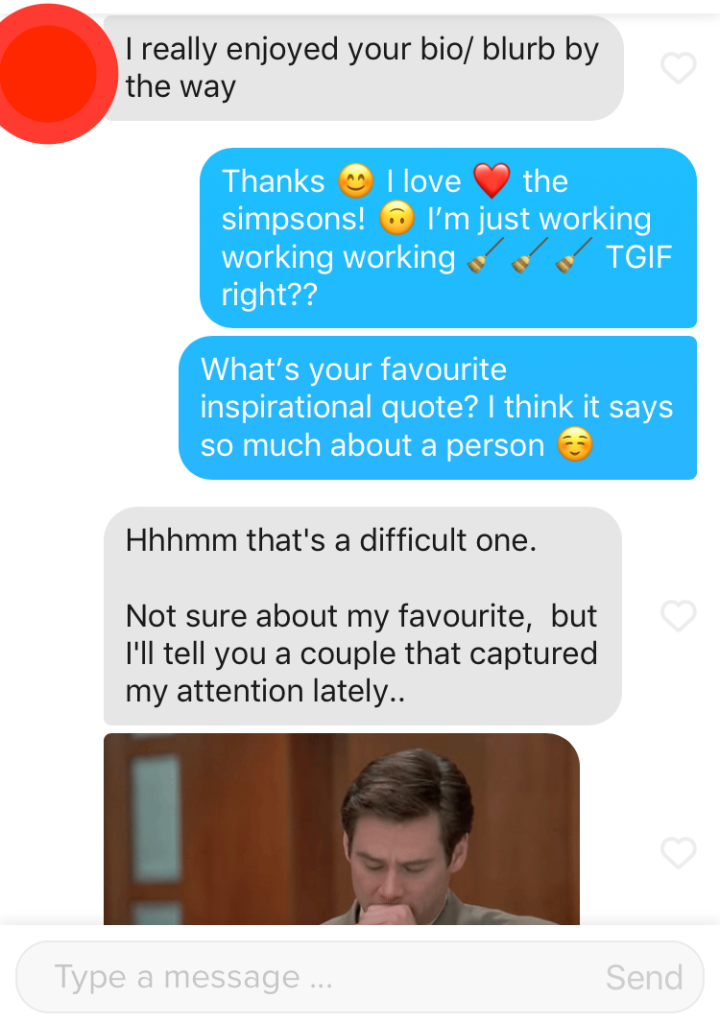 Clearly inspirational quotes were also not as turn-offy as I anticipated?

3. Talking About An Ex

This I do think is kinda a dealbreaker, because I’ve been on the receiving end of this kinda chat and it is awkward as fuck, guys. Don’t talk extensively about your ex, ever! In fact, ideally don’t bring them up at all until you’re at LEAST on a date face-to-face with your new potential guy/gal.

Here we go. PS: this is the same guy as the emojis and the inspo quotes. 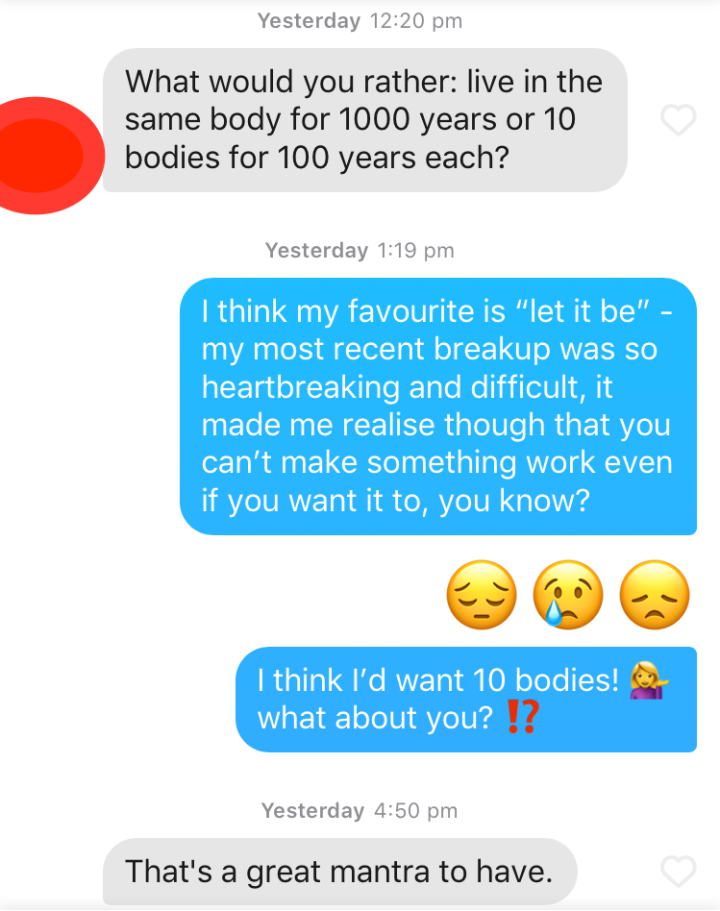 TBF that wasn’t as intense as it could have been – I wanted it to be realistic because no one’s out here being like “just crying over my ex rn, wbu?”

Anyway even THIS wasn’t pushing this dude away. Time to pull out the big guns.

Now, I AM a natural oversharer. But there’s oversharing in an endearing way – just being yourself and telling funny stories, and then there’s revealing deeply personal info. Like… this. 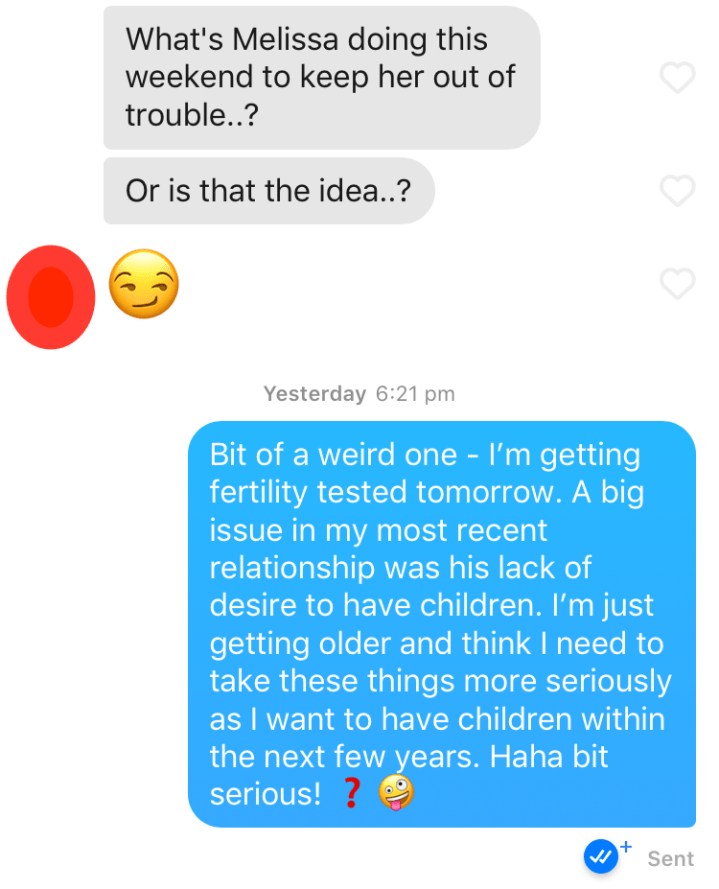 (I’m not getting fertility tested btw).

Anyway, that finally pushed this guy over the edge and I never got another response. Still! This proves you have a LOT of leeway for mildly unhinged behaviour on dating apps, don’t you think?

Now, many of us dabble in astrology shit but one thing you should maybe do in the early stages of dating chat is not… go HAM on it, ya know? I tried this with a different guy, to see how far you can go with astrology convo. 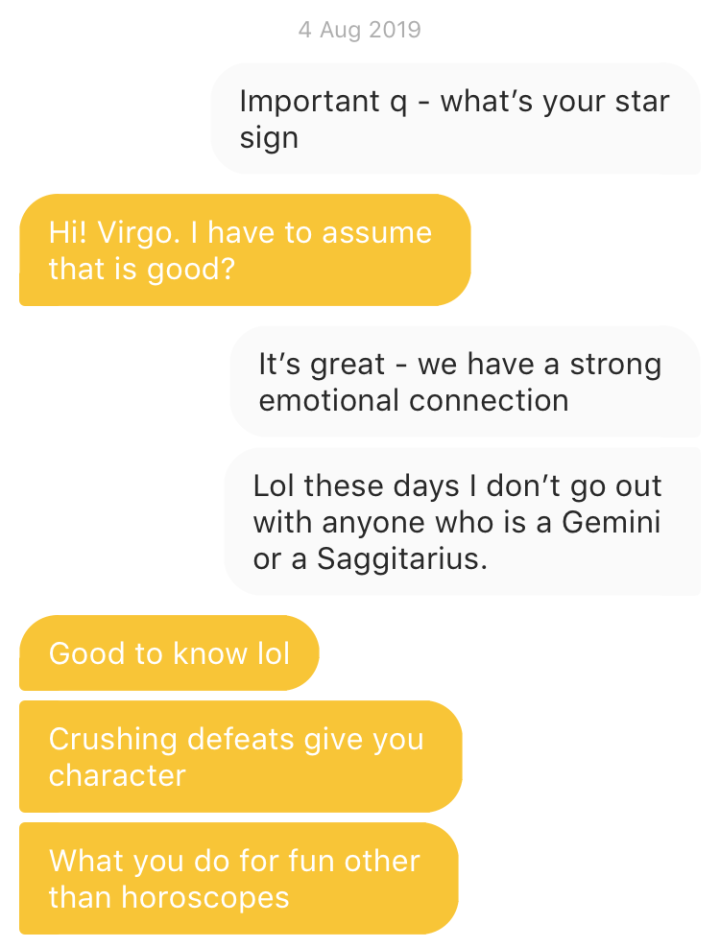 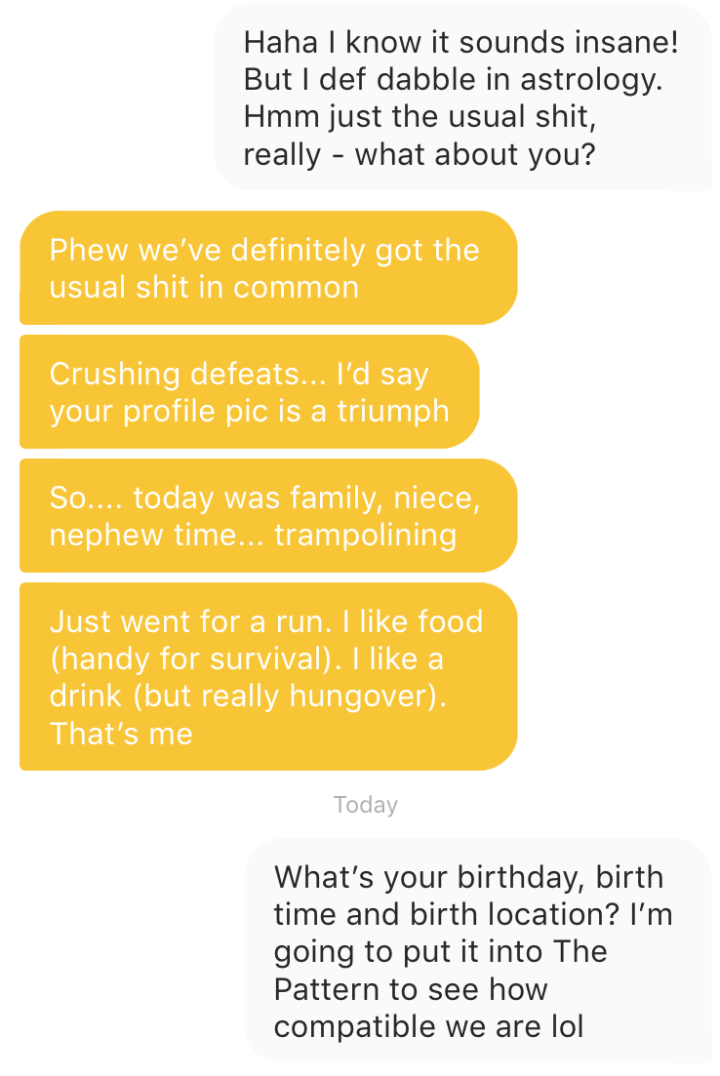 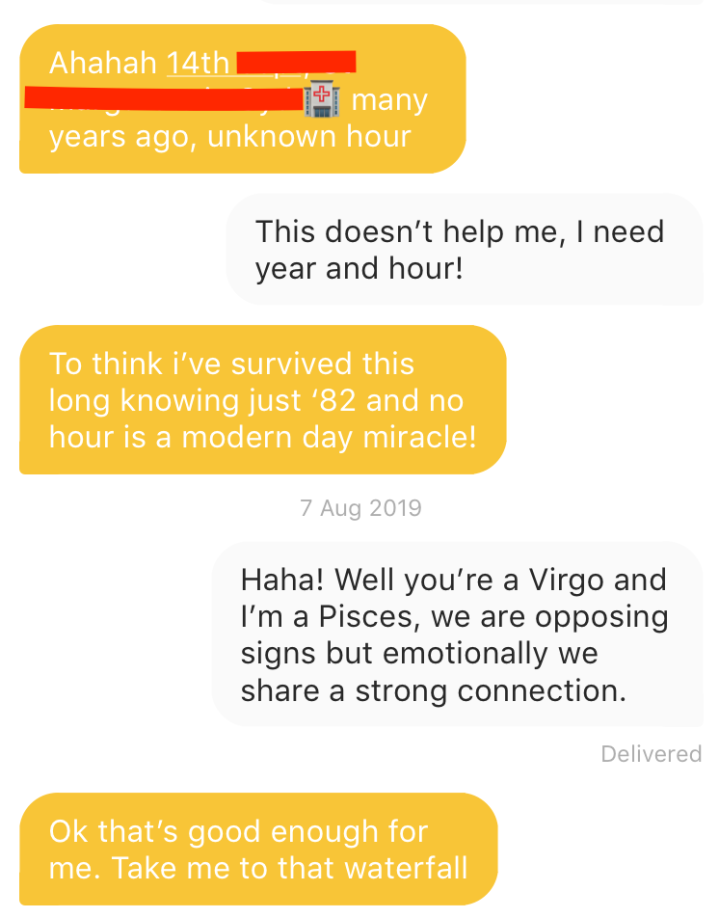 PS: the waterfall reference is to one of my photos.

Okay, so clearly star signs are not enough to turn people off? I tried it with a different guy to make sure.

This guy started out with a comment about my bio quote, which is (obviously) from The Simpsons. I segued extremely quickly into some astrology bullshit. 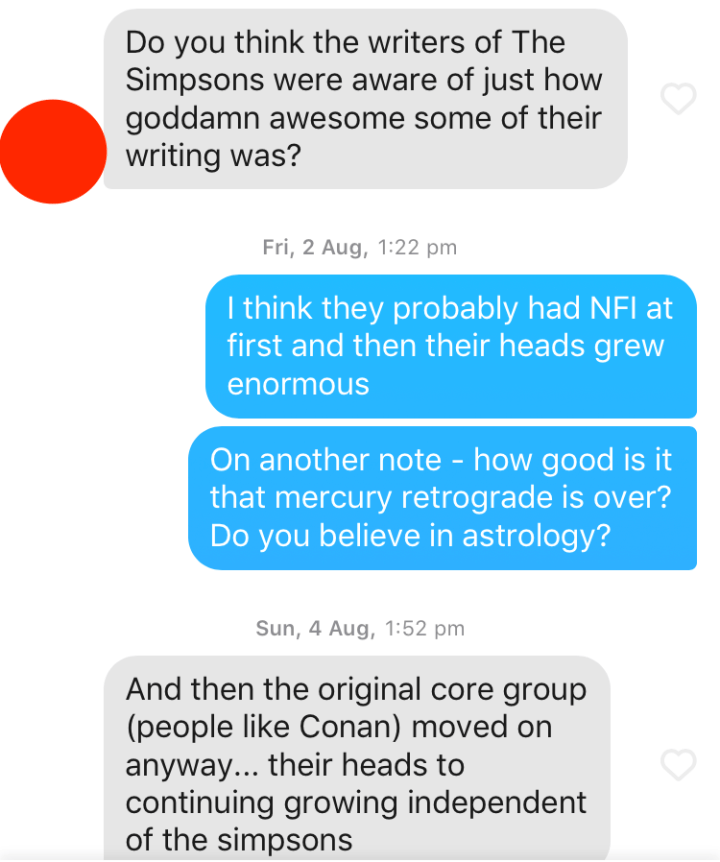 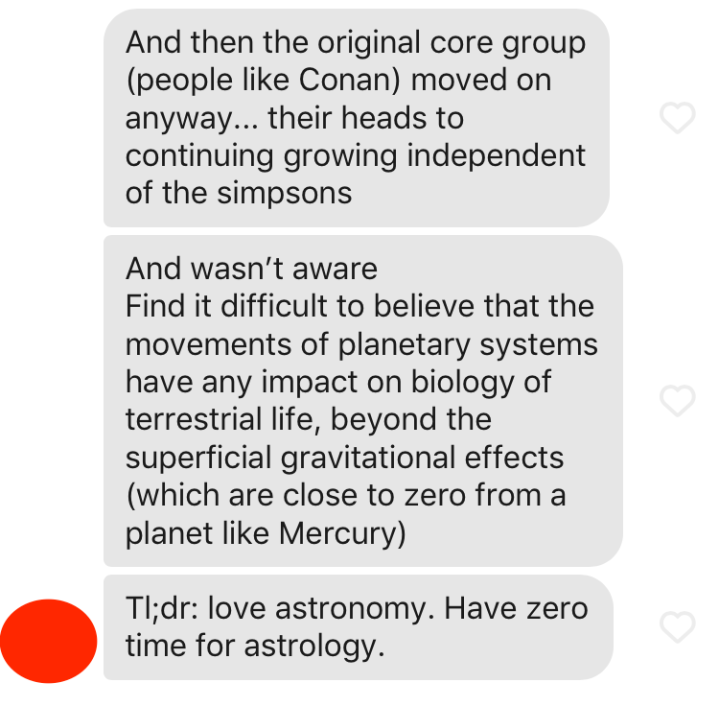 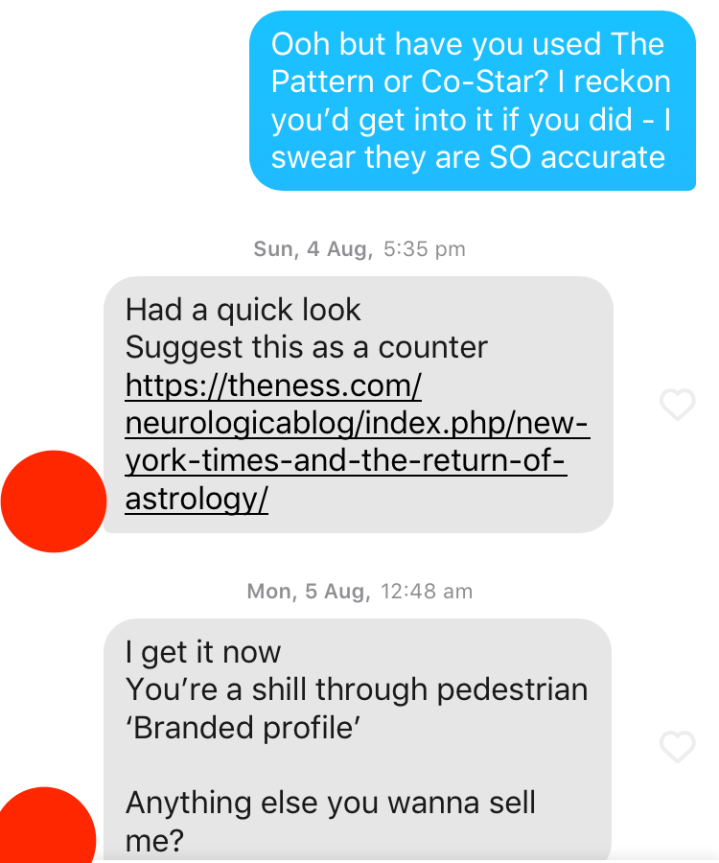 Ok, weird direction. PSA that Pedestrian doesn’t have “branded profiles” on dating apps, which is a) a wild concept and b) kind of genius, if someone did. Imagine just trying to sell Co-Star via matching with unsuspecting guys? GENIUS.

Anyway I KIIIIND of turned this guy off with my astrology bullshit? But in short I think astrology is not as off-putting as I thought. Who knew! Go forth and wax on about your moon rising in Cancer or whatever, you guys!

Look, it seems like you have to be QUITE next level with these texting traits to fully turn someone off messaging you. Seems like guys are a bit more receptive to astrology than I thought, and also just generally more down for different-but-interesting convos like… inspo quotes? I guess?

It’s clear to me that if you overshare to a really, really aggressive degree you’ll likely be left hanging, but honestly I had to push it with the fertility testing business. I can’t imagine any of you guys are writing that to people.

All of this was quite nice to see – maybe we’re not all out here binning people over the tiniest of texts, and have a lot of leeway for people’s weird quirks.

In short – maybe don’t ask people for their birth location and birth time within the first four messages, but overall be whoever the fuck you are in your soul, you know?

READ MORE
Did Your Break Up Destroy Your Heart Or Is Your Ego Just Having A Tanty?