High fash brand Chanel has been ripped to bits on social media this week after an influencer exposed its AUD$1140 advent calendar which contains crappy items like a fridge magnet and stickers.

Although Chanel has not publicly commented on the backlash, Gregoire Audidier, the international communication and client experience strategy director at Chanel Fragrance and Beauty, issued an email via The New York Times in which he slammed the influencer’s claims.

“The recent claim of a person being blocked by Chanel on TikTok is inaccurate. We have never blocked access to the Chanel TikTok page to anyone, because it is not an active account and no content has ever been published. We are committed to sharing our creations with our followers on all social networks we are active on. Our pages are open to everyone, and our followers are free to express their feelings and opinions, whether they are enthusiastic or critical.”

In the viral video, influencer Elise Harmon did a classic influencer unboxing where she unveiled all the goodies (or shall I say shitties) and revealed that the company had been doing customers dirty.

Her one and only compliment was that the box itself was shaped like a Chanel perfume bottle, which is a nice touch: 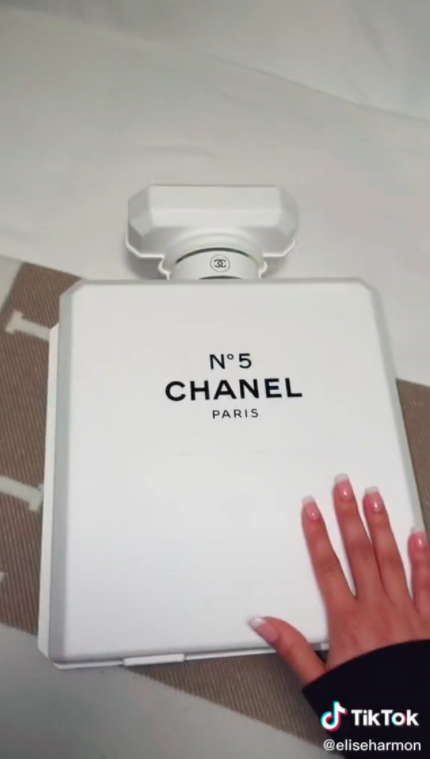 And that’s where the compliments end.

So get this: the Chanel website claims that each day of the calendar either “contains a full-size fragrance or makeup product, miniature, or other surprise marked with Gabrielle Chanel’s lucky number.”

But as seen in Elise’s viral video, aside from, like, a Chanel hand cream and a lipstick, the calendar mostly includes items that legit look like they were purchased from The Reject Shop by your mama for the annual advent calendar she’d make for you back in the day.

The items included stickers, a mirror, a fridge magnet, and other lame gifts stamped with the Chanel logo.

Worth the hype? Probably not but it is pretty

She said her intention in filming the video was to see if the festive gift was “worth the hype” and, well, it sure as shit ain’t!

To make matters worse, the video got picked up by Diet Prada who claimed that some of the items appeared to be old freebies that were once given as a gift with purchase.

After her video started to go viral, she claimed that the Chanel account blocked her, a claim which has now been refuted by the brand.

It had also been alleged that amid the backlash, Chanel deleted its TikTok page, which has also been refuted.