Posted on Remembrance Day in 2010, the image depicts a non-traditional female centaur, in which the horse half has simply been replaced by an additional pair of legs and (one can assume) a lengthened spine and ribcage. This itself prompts a lot of questions: Are there two sets of sexual organs? Two sets of intestines? Do the internal organs pass through the creature’s middle set of hip bones? How would this thing move with two sets of identical legs, unlike the horse on which it is modelled?

Any attempt to guess at where he got this image from would be pure speculation on my part. The image was not in the Google Image search results for either “hot centaur lady” or “titty centaur” (although I can tell you that a lot of other things were). The oldest version of this image that I could find through a reverse image search turned it up as the profile picture of someone on a weird Russian website that I could not figure out of the purpose of, albeit a version in which the centaur lady is wearing a jacket: 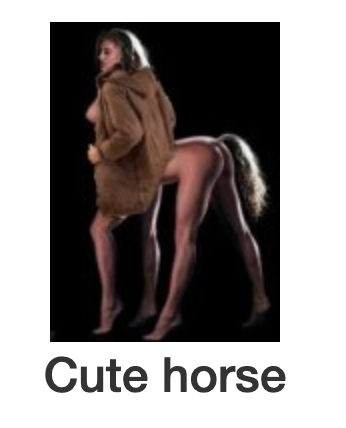 There are basically five reasons to do a Facebook post. The first is if your phone number has changed. The second is if you need a lift to or from the airport. The third is to keep the people in your life updated on major life events, which has some overlap with the fourth. The fourth is to brag. The fifth (and arguably most important) is to write seven or eight paragraphs of highly emotionally charged text when you have a bad customer service experience.

If the last one was indeed the reason, it sadly fell flat, with the image going uncommented upon from 2010 right up until when it was deleted, presumably today.